Dawn of Wonder: The Wakening 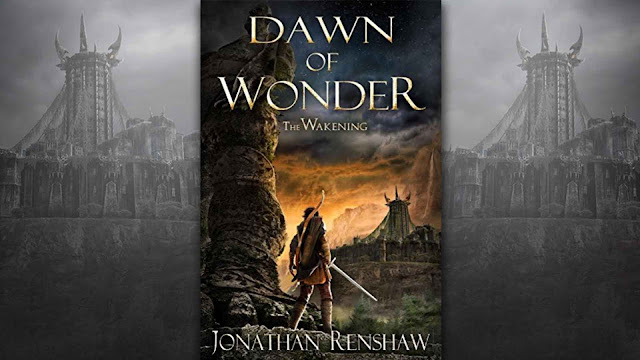 
This might, at first glance, seem to be your typical boy-meets-girl, boy-dares-girl-to-jump-off-of-a-thousand-foot-high-bridge-into-the-icy-cold-stream-below-and-girl-shows-him-up-by-actually-doing-it, story. And, as many a fantasy tale contains, there are swords, courageous heroes, battles to be fought (and sometimes with large, very toothy creatures), and evil not yet here but lurking ominously. Our hero, Aedan, is not yet thirteen but he has a sharp mind, and he'a had a hard life, which makes him wise beyond those few years. So when an officer comes galloping into the village with warnings of slavers on the way, Aedan is the first to suspect the man might not be the ally he seems. But when no one will listen, his foresight isn't enough to save his not-yet-a-girlfriend-but-already-his-best-friend Kalry. In the adventures that follow Aedan is equal parts determined and desperate, willing to do and try whatever it takes to retrieve, or revenge, his lost companion.

The book's size is not so typical – the 700-page first-of-the-series would make for a good doorstop. And not just any story would get my nephew recommending this to all his brothers and sisters, and any friend within earshot too. It is atypical too, in that it accomplished what no other book has managed: it made me look forward to running. I only let myself listen to the fantastic audiobook reading when I was out jogging, and at 30 hours long, it got me out the door roughly 60 times.

It is Christian, but not obviously so. The author is content to let the deeper tale – the moral of this story – come out gradually. I should add, I don't know the author is Christian but like the best bits of Narnia, or Lord of the Rings, this book is simply too good, and too true, not to be rooted in the Word.

The only downside is that Book 2 still seems to be a good ways out. Fortunately, there is a sense of resolution to Book 1 – it's as satisfactory a cliffhanger as a reader could really hope for.

So I'll pass on a most enthused two thumbs up, and express my gratitude to my nephew for being insistent that I should read Dawn of Wonder; I can't recall enjoying a fantasy novel more!

To give you an idea of the research the author invested in his novel, the video below is of him investigating whether it is possible – as one of his characters did – to make a decent bow in a single day using just a knife.