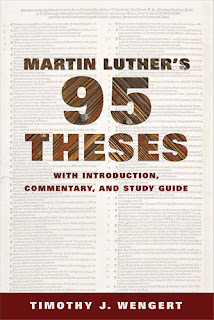 If you want to understand Luther and the reforms he began, can there be a better place to start than his 95 theses?

When I first got my copy in the mail, I was struck by how short it was. This is the Pope-shaking document that God used to start it all? Shouldn't it be...heavier? And if we were to take out the introduction, commentary, and study guide, Luther's 95 theses only amounts to 13 or 14 pages!

Thankfully, Timothy Wengert stretches it out to (a still slim) 90 pages so he can present Luther's pivotal work in the right context. He uses his introduction to set the scene, explaining how the doctrine of indulgences evolved from bad to worse. He also includes two other documents – Luther's letter to the Bishop of Mainz in which he respectfully asks the bishop to consider the theses, and Luther's "Sermon on Indulgences and Grace" written a year later, in 1518, which was intended as an explanation of his 95 theses for the common people. In the theses themselves, Wengert fills almost half of each page with footnotes to clarify Luther's more difficult points.

So this is a short, but intense read – it will take some effort to work through it, but not all that much time.

And to make the going a little easier, Wengert has sprinkled in all sorts of fascinating facts.


Outside of God's Word itself, Luther's 95 theses might be the key document that our Father used to reform his Church. It isn't long. It is an education.
Posted by Jon Dykstra at 12:55 PM No comments:

The Poetic Wonder of Isaac Watts

Titles can be dangerous things. The title of this book is appropriate, but perhaps misleading at first glance.

When I first read the title, I had the impression that the author was writing a tribute to Isaac Watts - lost in wonder at Watts' poetic skill. In one sense, that is true. Douglas Bond says in the book and in the video embedded below that Watts is personal for him. Watts' "When I Survey the Wondrous Cross" helped Bond recognize that:


Love so amazing, so divine,
Demands my soul, my life, my all.

However, it is also this very hymn that makes clear the more significant meaning of the title. Bond contrasts Watts' hymns with the often mediocre worship music of our present culture. Bond gives two reasons that Watts' hymns are superior:
According to cyberhymnal.org, Charles Wesley reportedly said that he would have given up all his other hymns to have written "When I Survey the Wondrous Cross." Bond relates in both the video and the book how Watts demonstrated that skill at an early age, to both the irritation of his father and the skeptical amazement of his mother.

Watts, however, was more than just a great poet. He was a humble servant of his Savior. The words "wondrous cross" demonstrate the preoccupation of his life and writing: to bring glory to God in Christ by demonstrating and evoking our wonder at His sacrificial love for us. As for his life, Watts devoted himself to the moral and religious growth of the children put in his charge as a tutor, and to the same end for children in general by writing hymns suitable for children, but just as theologically solid as his hymns for adults. His love for God was even expressed through his poetry written after the one woman he proposed to turned him down.

While Watts' life revealed his love for Christ, how about his poetry? One reason that Watts is more successful in evoking that wonder at Christ's life and suffering is that his hymns were based either on specific New Testament passages, or on the Psalms - but as seen through New Testament revelation. Bond gives many examples, of which one is in the Canadian Reformed Churches' Book of Praise, and the other is sung perhaps more widely than any other Christmas carol.

As for the former, Bond reveals how "Give to Our God Immortal Praise" is a beautifully updated New Testament version of Psalm 136, while the classic Christmas carol "Joy to the World" demonstrates the advent of Christ as the fulfillment of Psalm 98, especially of Psalm 98:2 -


The Lord has made known his salvation;
he has revealed his righteousness in the sight of the nations.

Bond makes a persuasive case that Watts, rather than tampering with the meaning of Scripture, was applying the same redemptive-historical method in his poetry as he did in his preaching, and so, in his poetic wonder at God's sovereign work in Christ (and through the Spirit), brought even one of his critics admit that with Watts, "Calvinism catches fire."


If you are beginning to sense and (I hope) share The Poetic Wonder of Isaac Watts, you can buy it at Amazon.ca here and Amazon.com here.

And if you're not quite convinced, check out the video below, where Douglas Bond summarizes the message of his book.

Posted by Jeff Dykstra at 4:00 AM No comments:

The girl who never made mistakes 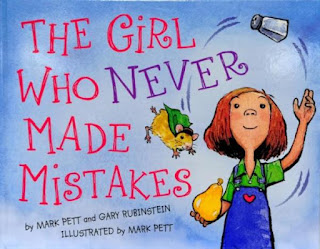 Beatrice, "The Girl Who Never Makes Mistakes," doesn't want to go skating with her friends, because she's worried she would slip and fall. She was once confident – she's good at just about everything after all – but an "almost mistake" has her worried that she's going to mess up. And that ruins all the fun for her...until she decides to just laugh at her big mistake.

This is a wonderful book for any family with a perfectionist. If you have a son or daughter who can't stand making mistakes, then you know the sorts of troubles they can cause themselves. As they craft their latest work of art, a stray crayon mark can leave them crying, and insisting that now they have to start all over. The self-induced pressure can mount to the point that they don't even enjoy coloring (or whatever the activity might be) anymore. And they want try new things because they're afraid they'll be bad at them (which, of course, they will be, because to get good generally involves first being bad).

For them, Mark Pett provides this gift - a mirror they can look into to spot their real flaw. And for parents it can serve as a short of "shorthand" – I know we've explained in the past to our perfectionist that she's ruining her own fun, but there's nothing like a story to make things clear to a child. And now, when she starts acting that way again, we can ask her whether she's pulling a "Beatrice."

Oh, and I should add, the bright bold pictures, and funny storyline make this an enjoyable read for the non-perfectionist as well.

You can pick it up at Amazon.ca here, and Amazon.com here.

Posted by Jon Dykstra at 5:32 PM No comments: