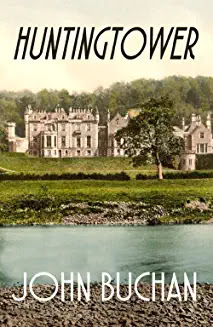 It was Alfred Hitchcock who brought John Buchan to my notice, and perhaps also to the notice of many others. If you are a fan of Hitchcock's work in the 1930s, you have probably seen The 39 Steps - which was based on Buchan's novel of the same title. I think that he should be more known for the very unusual set of linked stories, The Path of the King, which traced the (fictional) aristocratic lineage of President Lincoln.

But onto this also unusual novel - the story of a middle-aged Scottish man in his early retirement, Dickson McCunn. Dickson, the owner of a chain of grocery stores, finds himself at loose ends when he no longer has a company to run. His wife is taking a rest cure at a spa in the country, but Dickson hates the spa, so he begins his retirement by taking a "walking tour."

In typical Buchan (and Hitchcock) style, Dickson gets involved (initially unwillingly) in a quest to save a Russian princess from criminals who want to take her royal riches  for themselves - and herself for their their overbearing leader.

If Huntingtower has all these problems, why read this book? C.S. Lewis reminds us that reading old books is valuable, because we can generally see through their errors (because we don't share those errors), but we can learn about values that we've forgotten or dismissed. Keeping that in mind, here's what I liked about the story.
In other words, this is a coming-of-age story for a man who is already of age - a good reminder that we're never too old to take on new challenges for the help of our neighbours. If you want to find Scottish post-WWI adventure, as Dickson McCunn unexpectedly did, you can find Huntingtower here, and here in Canada.
Posted by Jeff Dykstra at 9:30 PM

Email ThisBlogThis!Share to TwitterShare to FacebookShare to Pinterest
Labels: adult fiction, adventure, books you can read in an evening or two, civil war