Anansi and the Moss-Covered Rock

by Eric A. Kimmel 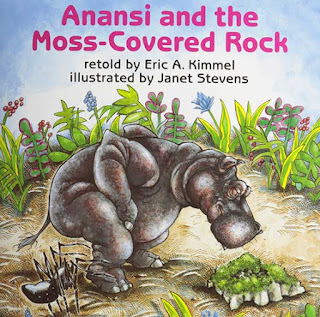 It takes Anansi a couple of goes – along with a couple of hours of unconscious time, lying on his back – to figure this out, but once he does, he knows just how he's going to use this magical rock. He starts bringing his friends to come see it, and encourages them to comment on it. Once they do, and are lying on their back taking an unintended one-hour nap, Anansi goes to their house and takes their food. He begins with Lion, then Elephant, Rhinoceros, Hippopotamus, and goes on and on.

The careful reader will notice that there is another animal watching all these goings-on. Somewhere behind the bushes, on most every page, is the little Bush Deer. He decides to make things right by pulling a trick on the trickster. When Anansi invites him to go look at the rock, Bush Deer goes but he doesn't comment on the rock. He even pretends he can't see it. In frustration, Anansi ends up spouting the troublesome phrase himself...and down he goes! That allows the Bush Deer a whole hour to clear out Anansi's house and return his ill-gotten gains.

There are no cautions for this book, but parents should be aware that Anansi the trickster is a folktale from Africa, who, in some versions, isn't simply a spider but is a god in the form of a spider. So the only caution would be not to presume, if you are buying another author's Anansi stories, that they will simply be morality tales with animals standing in for people, as is happening here.

This is a fun animals-as-people folktale that rewards the observant child (even the pre-reader) who spots the bush deer long before he makes his first "official" appearance. On the first go, a child might need some encouragement from mom or dad to look closely, but once they spot the deer once, they'll love finding him the next times. That's what makes this a book kids will look through repeatedly.

Posted by Jon Dykstra at 1:00 AM No comments: 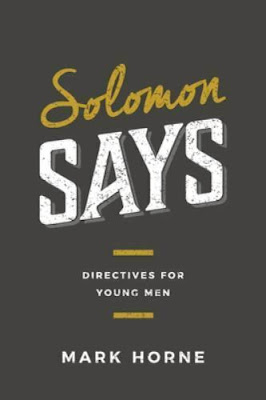 If you are not governed by God's word, which calls you, by the work of the Holy Spirit, to govern yourself, you will not be more free. Instead, you will be governed by your own urges, and will also lose the ability to govern God's creation, as we were originally called to do. Mark Horne shows how Proverbs reveals to young men just how to work out that creation mandate from Genesis.

Here are some of the headings of the chapters and sections Horne writes to show the superiority of wisdom demonstrated in Proverbs over many of the methods our society thinks will get us ahead:

Horne's book shows just how practical and up-to-date the wisdom of Proverbs is. In the last two chapters, Horne shows how Proverbs dovetails with the wisdom of the New Testament. There is little explicit mention of Christ, but for young men seeking to live out their commitment to Christ, there is great guidance on "building a better man."

If you are, or know, a young man who could benefit from knowing what Solomon Says, you can get Mark Horne's book here, or here in Canada.

Posted by Jeff Dykstra at 2:30 AM No comments: 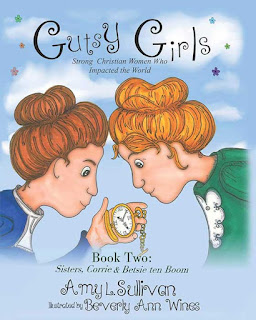 This is the true story of two Dutch sisters who knew that God could be trusted with their lives and that assurance gave them and their whole family the courage to hide Jews from the Nazis during World War II.

Our introduction to the sisters starts with the older Betsie ushering the daydreaming little Corrie out the door so she can go to school. Then we leap ahead to their adult life, with Betsie taking care of the household and Corrie helping her father in the family's watch shop. Then the Nazis invaded the Netherlands. As you might expect from a picture book, it is a G-rated account. That's accomplished via cartoonish pictures, and by covering what the Nazis had planned for the Jews in only limited detail like this:

But even so, the reader learns that the Nazis hated the Jews, and the ten Booms knew God wanted them to act. We are shown how they smuggled in bricks to create a false wall in their home that Jews and others could hide behind, should the Germans come looking. In one interesting note, the author shares that the width of that space – at just 23 inches (by 8 feet long) – was not even as wide as this book opened up!

The ten Booms helped 800 people before they were caught. While readers are, again, spared from the worst details, we do follow the ten Boom sisters to a concentration camp, where Betsie dies. That isn't where the story ends, of course: in the final pages we see Corrie freed and, through God's grace, able to forgive the very Germans who so mistreated her and her sister.

There are no cautions for this book. But it is the second of a series of 5, and the subject of Book 4 is Jennifer Wiseman, an astronomer who has had a big role in promoting theistic evolution. So the ten Boom book is well worth getting, but not so the series.

This is a very good first exposure to the ten Boom sisters for students in Kindergarten and First Grade. My hope, though, is that it wouldn't be the last exposure they get – for teens and adults there really is no more encouraging biography than Corrie ten Boom's The Hiding Place.

Posted by Jon Dykstra at 8:18 PM No comments: