Two novels that ask, "What if we found Jesus' bones?"

In 1906 a momentous discovery was made. While digging in Turkey, Hugo Winckler, a German archeologist, discovered the ancient ruins of the Hittite capital city of Hattusa.

This discovery was momentous because, up until that time, many had been sure that Hittites didn’t exist. The only mention of them was in the Bible, but since no solid archeological evidence of Hittites had been found, there was a growing speculation that the Bible had made them up. It was seen as evidence, then, that the Bible was in error.

Prior to 1906, conservative Christians still believed in the inerrancy of the Bible, even though the archeological evidence (or lack thereof) seemed to be stacked against them. In a way the 1906 find was hardly relevant to them – they believed before this discovery and continued to believe afterwards. The discovery did, however, illustrate two important points:


It is the logic and limit of trying to prove the Bible that is the focus of these two novels. Both books are built on a very similar premise: What if the bones of Jesus were discovered? Or to put it another way, what would the Church, and world do if the archeological and scientific evidence was stacked against Jesus’ resurrection? 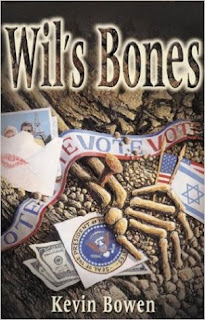 With short chapters (frequently two and three pages), this novel is a quick read. Wil Wilson has grown up to be the preeminent Biblical archeologist of the day. He is not a Christian though. The hypocrisy of his father, a respected deacon in his church, and an abusive womanizing drunk at home, has killed Wil’s faith. In fact, Wil first becomes interested in archeology as a way to hurt his father. If Wil can only find Jesus’ bones he can destroy his father’s church, his faith, and his respected position as deacon.

When the bones of a crucified man are found in a hidden section of the Garden Tomb, Wil thinks he has found what he is looking for. However, the enormity of this find leaves many highly placed people nervous. How will the world’s 2 billion Christians react when they hear the news? This is the most interesting part of the book, as ministers specializing in apologetics suddenly start wavering. Liberal Christians start winning more and more recruits and the President of the USA renounces his Christianity and launches his reelection campaign with the slogan “Leading you into the Post-Christian age.”

A solid, entertaining book that deals with some very serious ideas, this novel is still a pretty light read – parts of it might even be described as corny. I definitely recommend it, but not as some sort of great work of literature. If you are the type of person who only reads weighty fiction, then this is not the book for you. But if you are looking for something fun and intriguing, in which the writing, while middling, doesn't get in the way of the story, then I think you may enjoy this as much as I did.

You can pick up a copy at Amazon.com by clicking here and Amazon.ca here.


A Skeleton in God’s Closet 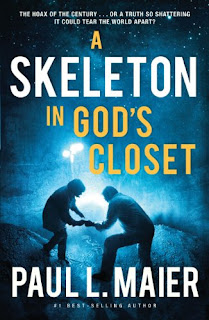 The hero of this story is Dr. Jon Weber, a biblical scholar, and son of a pastor. Invited to a dig in Israel, he discovers what he thinks are the bones of Joseph of Arimathea. However, as the dig proceeds his first evaluation changes and he starts to wonder if these bones might instead be the bones of Jesus.

This is in many ways a mystery novel. As this is a Christian book, readers know from the start that this must be a hoax (I don’t think I’m giving anything away by saying that) but how could a fraud of such magnitude be pulled off?

The author, Paul Maier delves a good deal deeper into the world’s reaction to this find. When it is first revealed the evidence seems to be utterly beyond question, and even Jon Weber’s father, a Lutheran pastor, is disturbed. But while some people start renouncing their Christian faith, Pastor Weber, continues on, knowing that the find must not be true. This is a very intriguing element in this story, since Pastor Weber knows that his own son believes that the bones belong to Jesus. So even though his son found the bones, Pastor Weber’s faith remains steadfast. And of course, in the end, he is proven right.

Another intriguing part of the book: Maier is an Old Testament scholar and his expertise comes out. Throughout the story we learn many fascinating details about how archeology is done, and what both ancient and modern Israel looks like.

So which of these two books is best for you? Both are fun, but Skeleton is the more sophisticated – it would be Adult Fiction, whereas Wil's Bones is more Young Adult.

If you like it you'll certainly enjoy the rest of Paul Maier's fiction. In fact, the only book that doesn't quite measure up is a sequel he wrote to this one called More than a Skeleton - the same characters return, which is great, but they run through the same plot, which is not.

You can pick up A Skeleton in God's Closet at Amazon.com by here and at Amazon.ca here.
Posted by Jon Dykstra at 6:07 AM