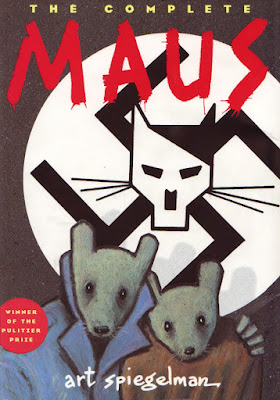 Every year close to Remembrance Day, I try to tell my students a bit about why Canada went to war. I give them some of the nasty details of the Holocaust including the story of Dr. Joseph Mengele known as the "Angel of Death." Lest the kids be overwhelmed by the gruesome detail and just memorize it for a quiz, I try to personalize my account. I tell my students about a little Dutch boy whose father was a member of the Dutch underground and then relate to them about the day Canadian troops came to liberate that boy's village. Then, when all those kids are mentally cheering the arrival of those soldiers, their fellow Canadians, I tell them that boy in the story is my dad.

In the same way, Maus personalizes the story of the Holocaust. It is the tale of the author's father, mother, and brother. While the father and mother live through the Holocaust, the brother doesn't. Though the mother fails to cope with her experiences - ultimately committing suicide - the father is left cruelly scared as well. Much of the book shows how the father has been emotionally wounded, and how his son - the author - is affected by this as well.

Being a graphic novel, there is a curious visual convention that is used. All the characters are portrayed as animals; the Poles as pigs, the Jews as mice, the Germans as cats, and the Americans as dogs. There are some obvious reasons for those choices, but it's also interesting that the Germans are always ugly looking cats and the Americans are virtually always ridiculously friendly and helpful looking dogs.

The story is raw and filled with emotion. Being written as a graphic novel (a fancy term for a really big comic book) you not only read how people were starving in the camps, but you see it as well. You not only mentally visualize the compromises and moral trade offs that were made, you get to see them.

With raw emotions comes occasional use of raw language and this does include some profanity - God's name is used in vain. It's only two or three times in the book, and it is certainly true to the moment in the story but it shouldn't be there at all.

For an emotional appreciation of the suffering caused by the Holocaust not only during World War II but long after, this book likely can't be beat. You may not want to read it right before bedtime since the images have a way of lingering in your mind.

The Ambassador's Guide to Mormonism 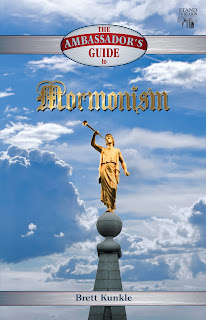 I’ve been good friends with a Mormon for nearly 15 years. In that time I’ve worked through several books on how best to challenge and present the Gospel to him, and while Brett Kunkle’s The Ambassador’s Guide to Mormonism is the shortest I’ve read, it is also one of the most useful.

Kunkle gets to the key issues quickly - it is just 64 pages - and suggests helpful “tactical” questions that will expose how:
It’s the tactical questions that set Kunkle’s book apart from most others - he gives his readers tools they can put to ready use.

Because Mormons claim to be Christians, and use the same theological terms while giving them different meanings, it can be quite confusing to start talking with them about God. They sound very Christian. So a helpful first step is to make it clear that there are enormous differences. Kunkle shows how this can be done with the use of clarifying questions.

When a Mormon tells you he is also a Christian, Kunkle suggests asking him, “Does that mean I am also a Mormon?” Their response will likely be a “a swift and emphatic ‘No!’” Mormons don’t believe they are Christians like us - they believe they are the only true Christians. However, they often aren’t upfront about this, so we need to call them on it. Kunkle’s question is a quick, tactful way to do so. If we are going to genuinely explore our differences, we need to be honest about them.

One of the most notable differences between Mormons and Christians concerns the Gospel. This difference can also be clarified with a thoughtful question. Kunkle suggests asking your Mormon friend, “What is the ultimate goal of your religious efforts?”

For us, all our efforts are thanksgiving directed to God for what He has already done for us. For Mormons, their efforts are the means by which they may or may not achieve godhood - it depends on what they do.

That’s quite a difference! And it’s one that shows Mormonism to be a works-based religion. Kunkle calls this the “Impossible Gospel” - rather than being freed from the yoke of the law (Acts 15:10) Mormons have to live up to it. The law, rather than God’s grace, is what they are turning to for their salvation. What a heavy yoke to bear!

The tactic I most appreciated was Kunkle’s encouragement to set modest goals for any conversations - instead of pressing for an instantaneous conversion we should be content with leaving them a thought to consider. In the excerpt that follows, Kunkle calls this “putting a stone in their shoe.” It’s a humble approach that recognizes, like Paul in 1 Cor. 3, while we can try to plant a seed, it is God, not us, who will cause it to grow.


I was in Salt Lake City on my first Utah mission trip with 20 other students and leaders from Biola University. We’d met John just an hour earlier. Now we were sitting in a local diner a block from Temple Square listening to his story.

“My path out of Mormonism began during a conversation with Christians like you, almost 20 years ago,” he said, “so keep doing what you’re doing.”

John grew up LDS (Church of Jesus Christ of Latter-Day Saints) and had become a “temple” Mormon. His wife and kids were Mormons. By the time our paths crossed, he had decided to walk away from it all, convinced it was false. As I listened carefully to John’s account, I was struck by the prominent role he gave to a 20-year-old conversation with Christians. According to John, his conversion out of Mormonism started there and came to completion two decades later. What happened in that first conversation? Christians planted a seed.

Think about the Mormons you know. Most of them probably grew up in the LDS Church. Their parents are Mormons. Their family members are Mormons. Most of their close friends are Mormons. The LDS church plays a preeminent role in their life, touching every area. With this in mind, is it realistic to expect Mormons to abandon their faith after one or two conversations? Probably not. That’s an unrealistic goal.

Because of our love for LDS friends and family members our final vision for their lives is that they come to know the true Jesus. But that’s not the goal of every individual conversation.

Recently a friend shared that some Mormon missionaries had come knocking and she invited them into her home for conversation. After a second follow-up visit, she decided to cut things off. “Look, you guys aren’t going to change your views, and I’m not going to change mine. So it’s pointless to continue meeting.” That was after just two conversations.

If the goal of every conversation is conversion, you’ll find yourself frustrated and ready to move on. So don’t try to close the deal right away. Instead, just try to put a stone in their shoe. What’s your reaction when you get a stone in your shoe? It bothers you. You can’t stop thinking about it until you take the shoe off and deal with the annoyance. The ultimate goal is to see our LDS friends come to Christ, but the goal of any individual conversation is to put a stone in their shoe. Give them one good thing to think about.

This approach takes time. Ask yourself if you’re willing to be patient. It may take years walking with your LDS friend before you see them come to Christ. For some ex-Mormons like John, it takes Christians leaving stone after stone, year after year, before they’re ready to walk away from Mormonism. Hopefully your perseverance means you’ll still be around, ready to walk them into God’s Kingdom when the time comes. *

There is a lot to love in this slim book. But it is small so if you’re regularly talking with Mormons you will want to follow it up by reading books from apologists like James White and Ron Rhodes, or watching the series of impressive documentary films www.SourceFlix.com has created challenging specific Mormon claims.

The most important take away from Kunkle’s book is that thoughtful, tactical questioning is a great way to begin. Mormons sound like Christians, but careful questioning can make clear the enormous differences that exist between the Mormon and Christian Gospel. And it is only once that difference is recognized that we can then present God’s Gospel to them.

May God use us as his instruments in reaching our Mormon friends and neighbors!

*This excerpt is reprinted with permission of Stand To Reason (www.STR.org) where Brett Kunkle works as a full-time Christian apologist.

Posted by Jon Dykstra at 1:00 AM No comments:

The Abolition of Man

In my previous review of That Hideous Strength, I noted that scientism - the worship of science - was the target not only of that novel, but of C. S. Lewis's book of essays The Abolition of Man. Lewis, a native of Britain, starts by focusing on an elementary English textbook from his own nation's education system that refers to the (as Lewis puts it) "well-known story of Coleridge at the waterfall." The textbook's authors correct Coleridge for believing that he has made an objective judgement about the waterfall in calling it "sublime." The authors assert that any judgement about beauty or morality is really only a statement about our own feelings. In other words, the authors strongly endorse relativism. 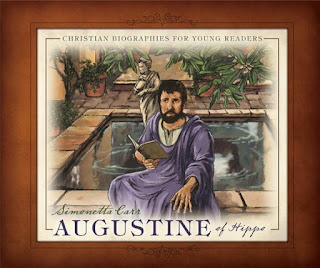 This is a book I would have liked to have had when our offspring were youngsters! Its 66 pages are interesting and easily read in about forty minutes, but it is not hard to spend a lot more time with this book because of the many fine illustrations and photos that take up about half of its pages.

The publisher’s blurb on the back cover claims that, “outside of people in the Bible, Augustine of Hippo is the most influential person in church history.” That’s debatable, but his influence in explaining the Bible’s teachings was remarkable. “Yet how many people know his story? Author Simonetta Carr introduces young readers to the life and ministry of Augustine, sharing with readers Augustine’s personal struggles and the high value he came to place on the Bible and truth. Reader will also see the difficult days in which Augustine lived, and learn about his disputes with false teachers and about the turbulent times during the fall of the Roman Empire.”

That sums up the book very nicely. Along the way, we learn about Augustine’s Confessions and his twenty-volume The City of God, all of which are still readily available today. We get a clear understanding of why the teachings of Pelagius were false. We discover many more interesting facts about the culture and history of the Roman Empire.

This is a very readable book for the ages 7-12, but can also serve as an excellent resource for parents and teachers. Recommended without reservations.