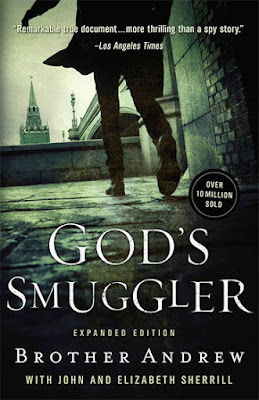 
This is an amazing true story about God’s miraculous interventions to get Bibles to his persecuted Church in both Communist countries and Muslims ones.

There are miracles all around us, but the rising sun, our pumping hearts, and babies’ wriggling toes do their thing with such regularity as to seem ordinary. Not so the miracles in God’s Smuggler. Here “Brother Andrew” (1928- ) relates one extraordinary answer to prayer after another: a needed cake delivered by an off-duty postman, money of the right sum arriving at just the right time, the instant healing of Andrew’s crippled ankle.

Then, in his work smuggling Bibles behind the Iron Curtain, this Dutchman came to rely on the extraordinary becoming regular. Border crossings into Communist countries were always tense, but each time Brother Andrew would ask God to “make seeing eyes blind” and again and again God would do so. The same border guards who had just taken apart the car in front of them would simply wave them through or, if they did inspect their cargo, the guards would completely miss the Bibles crammed in everywhere. It was through these regular miracles that God used Andrew and his coworkers to deliver His Word to millions in the persecuted Church.

While reading this to my children, I told them that we shouldn’t understand the many miracles Andrew experienced as evidence that he was always acting and praying as he should. He acknowledges himself that God honored some of his requests despite how he prayed. So we don't need to take this all prescriptively, as what we also should do, but we can take it descriptively as evidence of God’s great love for his persecuted Church.

We can also appreciate how aware Andrew was of his complete reliance on God. We all are, all the time, but when times are good we so often forget. Living his life in danger so much of the time, Brother Andrew wasn’t nearly so forgetful.

This would be also be a valuable tool to impress on a younger generation that while in their lifetimes it has primarily been the culture that has been the biggest enemy of God’s Church, in many places, and at many times, it has been the government.

I would recommend this primarily for adults, because it does take some discernment to think through where Brother Andrew is relying on God in a ways that we too should imitate, and where he might be getting close, or even crossing the line, into testing God.

For a younger audience, just read it to them and discuss afterwards. Then it could be good for as young as 8.

The Divine Challenge: on matter, mind, math, and meaning. 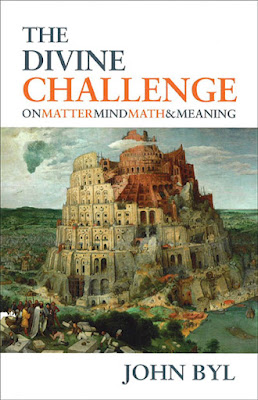 Is the Christian vs. evolutionist/naturalist/materialist debate about the best explanation for why there is something, rather than nothing? No, says Dr John Byl, in this brilliant apologetic work. The real question is “Who will rule: God or Man?”

In the world’s attempts to usurp God, they’ve crafted many a worldview to try to explain things apart from Him. Dr. Byl shares the world’s best godless explanations and shows, often in the proponents’ own words, how their attempts are self-contradictory or simply fail to explain what they set out to explain. Naturalism says there is nothing outside of nature, and materialism that there is nothing outside matter, so how can either explain how matter came to be, or the non-material world of math and meaning? Byl also makes evident how very often these godless philosophers understand the emptiness of their best answers, and yet cling to them anyway only because they hate the alternative: bowing their knee to God.

This is a book that will stretch most readers, and in some parts (Chapter 14 was a doozy for me) I only got the gist of it…but what an encouraging gist it was! While the 2004 paperback edition is still available, Dr. Byl has made the 2021 revision a free ebook you can download on his blog here.