A graphic novel that shows you how to make comics 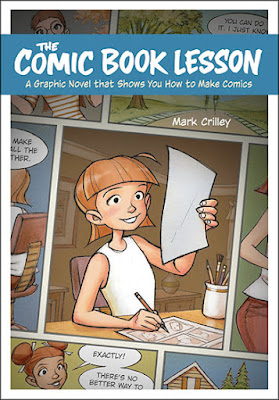 
Emily is a young artist with plans for a comic book - she wants the hero to be a "pet finder" coming to the rescue of any and all who have lost their furry friends. But it's one thing to have a story and the skills to draw it and yet another to know how to transform it into comic book form. So how can she bridge that gap? She just needs the right sort of mentor. What author Mark Crilley has given us is a story showing aspiring cartoonists how they, too, can learn what Emily wants to know – we get to come along for her journey as she meets three talented ladies who are willing to teach.

First up is an encounter at the comic store: Emily discovers that the store clerk, a high schooler named Trudy, is a fantastic artist working on a comic project of her own. Emily's enthusiasm and persistence ensure that one impromptu lesson becomes more. Trudy teaches Emily things like pacing – how including adding a couple more frames can make a scene more dramatic – and how a character's eyebrows communicate more about their emotions than a smile or frown.

Trudy is so impressed with Emily's work that she introduces her to Madeline, a friend who's already a published cartoonist. The lessons Madeline teaches include the importance of a "broad" establishing shot before going in for close-ups, and the need to script a comic before you begin drawing it. Madeline, in turn, introduces Emily to her own cartooning mentor, Sophie, who has yet more to teach Emily, like the proper order for word bubbles, and the need to eliminate any possibilities of confusion.

While I don't like to include spoilers, for the sake of young readers, I'm going to include one. During her time with Sophie, we find out why Emily was so earnest about her hero being a pet finder: because Emily wasn't able to rescue her own dog. Her loss is poignantly told, which made my one daughter sad enough that she stopped reading. I suspect though, that she might pick it up again. If your child is a sensitive soul, it might help to give them a heads-up beforehand.

I'm going to list a few cautions that aren't all the relevant to the mid to older teens this is aimed at, and I only include them because some 10-year-olds and even younger could really enjoy this comic, but with some parental guidance.

This is one of the tamest, safest "how-to-cartoon" books you can find (Maker Comics: Draw a Comic is another, though it covers different ground). But parents need to know that comics today contain loads of weirdness. Whether it's the way women are depicted as impossibly buxom and skinny, or the heroic witches, ghosts, and demons that feature in more and more stories, or the queer agenda that's inserted in comics for even the youngest ages, there is a lot of twisted stuff out there.

The Comic Book Lesson isn't pushing any of that, but in a few instances, this secular work does "bump" into this weirdness. So, for example, Trudy mentions the "Electric Angel Nurse Mizuki" comic she's authored, and we're shown the cover depicting a nurse with wings. Madeline mentions she is writing a comic book about assassins for hire. A customer asks for a copy of Raina Telgemeier's Smile, which is a fine book, but whose sequels take a queer turn. And the 12-or-so-year-old Emily is depicted at a comic store and convention without her parents, which are weirder places than we'd want our 12-year-old to go without us.

That's about it. Nothing too bad, but some of it worth a discussion, especially for younger readers.

Comics can combine not simply exceptional writing but outstanding art, doubling the creative potential to explore. That's why Christians really should dive into this medium. The Comic Book Lesson is a solid piece of "edutainment" that'll give young aspiring artists an introduction to the general approach needed to be able to expand and refine their skills. This is not so much a "how-to-draw" book – there's already enough of those – as it is a "how-to-decide-what-to-draw" book.

If your child loves The Comic Book Lesson, you may be interested to learn that the author has also created The Drawing Lesson, which I hope to check out very soon.

For more, watch the video below where the author gives an in-depth (20 minutes long) introduction to his book.