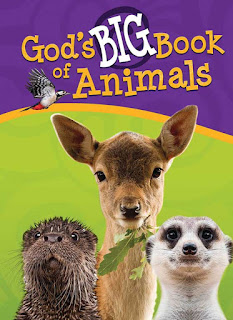 248 pages / 2019
Did you know that baby elephants drink three gallons of milk each day? Or that “woodcock” means “roosters of the forest” And did you know female great white sharks are actually larger than the males?
God's Big Book of Animals is GIGANTIC - it's bigger than any other book I've read. It is filled with amazing information about intricate animals – like the great white shark! – all created by God. Each of the 60 animals are given 4, bright, beautiful pages full of descriptions, fun facts and pictures. Plus each animal has their own 14 x 10 inch full-page photo.
More fun fact examples include:
I think kids 7 and up would love this! But even kids younger would like the many pictures inside.
– Sophia Dykstra
Posted by Jon Dykstra at 5:41 PM No comments:

by Sigmund Brouwer and Hank Hanegraaff 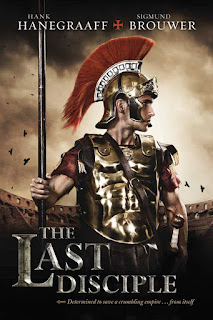 It’s the year 65 AD, and Gallus Sergius Vitas is one of the last principled men in Rome. He’s also a confidant of Emperor Nero which means his daily life is conducted on a knife’s edge: indulging the emperor’s perverse demands might keep Vitas safe but would compromise the man that he is; yet to openly oppose the emperor would lead to his immediate introduction to the Coliseum’s lions.

Our story beings with Vitas attempting this balancing act once again. Nero has dressed as a beast, his outfit comprised of lion and bear skins, complete with collar and a chain held by a servant. His night’s entertainment is to terrorize a group of prisoners while playing the part of a beast. Enjoying their fear, the emperor quickly works himself into a killing frenzy. Vitas sees this all from the shadows and can’t let it happen, knowing, though, that to oppose the emperor is to die. So Vistas yells at the chain-holding servant instead: “If the emperor knows you are involved in illegal torture, he will have you destroyed!” It is, as Brouwer writes:

“an all-or-nothing bluff, pretending that he did not know Nero was inside the costume. Trusting that Nero would be too ashamed to admit it. Now. Or later.”

Vitas’ bluff works, but not just because of his daring. An earthquake sends Nero scurrying away, convinced that the shaking ground is a sign of divine judgment. 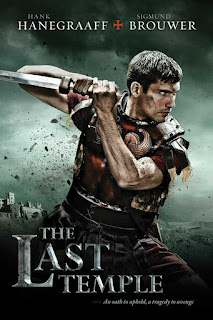 It’s a great opening, highlighting the depth’s of the emperor’s perversity, the heights of Vitas’ courage, and the certain presence of God even in these pagans’ lives. In less talented hands, the earthquake’s unlikely timing could have come off as cheesy, since in real life God more often uses “ordinary means” (like doctors’ talents or wise friends’ advice) than miracles to accomplish His ends. But miracles do occur, and Brouwer makes it believable. It’s a good thing too, as this is but the first miracle in a story that’s all about how God used miraculous means – the prophetic words in the book of Revelation – to warn his Church to flee the fall of Jerusalem in 70 AD.What Brouwer and his writing partner, theologian Hank Hanegraaff, have done here is write an alternative to Tim LaHaye and Jerry Jenkins’ popular Left Behind series. Where Left Behind places the beast of Revelation 13 in our near future, Brouwer and Hanegraaff place him in the first century, in the near future of those who first received John’s letter. And they identify the beast as Nero and the bloody empire he led. This “partial preterist” (partial past) interpretation of Revelation holds that the book was written before the fall of Jerusalem in 70 AD, and the city’s fall is a partial fulfillment of much of the prophecy in Revelation.

This, then, is fiction meant to teach as well and entertain, and it does both brilliantly. Brouwer has crafted a story that takes us all around the Mediterranean, with Jews, Romans, and even troubled Christians wrestling with the question of “Who is Jesus?” There’s also political plotting, assassination attempts, sieges, gladiators, and just a touch of romance.

The slowest bits are when theologian Hanegraaff has characters take a page or two to teach Vitas and others what a particular passage in Revelation means. If you’re reading it only for the story, these sections might drag, but they are well spaced out. And if you’re interested in learning about the partial preterist interpretation of Revelation, these will be your favorite passages. 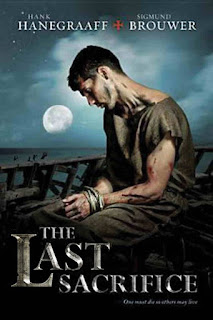 One caution: Nero’s depravity, though described with restraint, still means this is not a book for younger teens.

If The Last Disciple series has you eager to read more of Sigmund Brouwer’s work, be aware that he is a proponent of theistic evolution, and also an Arminian. That doesn’t come up in this series (or his best book, Innocent Heroes, a treat for kids, teens, and parents alike) but it does come up in some others.

Finally, readers should be aware that partial preterism probably isn’t the majority view in Canadian Reformed churches (though I’m not sure what the majority view might be, as Revelation seems to be only rarely discussed). Some do hold it though, and it's also held by Reformed pastors outside our circles such as RC Sproul, Douglas Wilson, and Jay Adams.

The Last Disciple is a great book, kicking off a great series. The cast of characters is large, so if you’re like me, make sure you get the whole trilogy – The Last Disciple, The Last Sacrifice and The Last Temple – right away, because if you wait too long between books, you may start forgetting who is who.

I’d recommend this to anyone who enjoys historical fiction – Sigmund Brouwer has got skills. And if you’d love to have partial preterism explained, well, this is the most entertaining way you could ever learn about it!

Posted by Jon Dykstra at 9:34 PM No comments:

The Bark of the Bog Owl 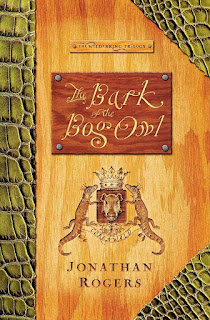 Our hero, Aidan Errolson, is a medium-sized twelve-year-old with dreams that are far bigger. When we join his story he’s just putting the finishing touches on a letter:

You will be glad to learn that I am still available for any quest, adventure, or dangerous mission for which you might need a champion or knight-errant. I specialize in dragon-slaying but would be happy to fight pirates or invading barbarians if circumstances require. I would even be willing to rescue a fair maiden imprisoned by evil relatives. That would not be my first choice, since I am not of marrying age. Still, in peaceful and prosperous times like these, an adventurer takes whatever work he can find…

For Aidan, it’s all that peace and prosperity that’s the problem. While his father was a great warrior, and his grandparents carved out a settlement on Cornwald’s wild eastern frontier, Aiden’s only excitement comes from the imagined foes he fights in defense of the flock he’s been tasked to tend.

However, things quickly take a turn.

First, Aidan hears the bark of the Bog Owl, a creature that has never been seen. Then the Bog Owl turns out to be one of the feechiefolk, who are no less the stuff of campfire stories, akin to impish elves, or fierce boogeyman, and like them both, entirely made-up. But this feechie boy is anything but… and he wants to wrestle.

Second, Bayard the Truthspeaker makes an unannounced stop at the Errolson farm to see, so he says, the “Wilderking of Corenwald.” And Bayard declares that it is none other than little brother Aidan. That’s quite the surprise, and quite awkward too, because Corenwald already has a king, and the Errolson family are his most loyal supporters.

Now, if you’re a bit quicker than me, this last bit might be ringing some bells, reminding you of Samuel’s visit to the house of Jesse (1 Sam. 16). This is where my middlest caught on, but I needed several more chapters. I finally figured it out when Aidan fights a giant. With a sling. And five stones.

In my defense, this is only very loosely based on David – Aidan has to deal not only with a giant, but cannons too, and there’s no feechie folk in the original either. That it is inspired by, but does not pretend to be, the story of David is part of what makes this so intriguing. While there’ll be no confusing the two tales, Rogers’ account will have you reflecting on what a tough position David was in, the king not yet crowned, loyal to, and yet chosen to replace, the failed king.

I usually list any possible cautions for the book being reviewed, but there are none for Bark so I’ll list one requirement instead: this absolutely needs to be read aloud. The feechie folk dialogue, as it is paced and misspelled, will have you speaking with the most delightful accent, without even trying. Jonathan Rogers makes it easy for a dad to sound good.

I really can’t praise this one enough. I started reading it on on my own, and had to stop midway and start again with my girls because this was simply too good not to share. The Bark of the Bog Owl has been compared to The Lion, the Witch, and the Wardrobe, not so much for story similarities, but because both are clearly Christian and utterly fantastic fantasy. Bark of the Bog Owl is a book that, if you do read it to your children, you can be sure that one day your grandkids will hear their own parents reading it to them too.

The two sequels – The Secret of the Swamp King, and The Way of the Wilderking – complete the story. This is really one epic tale split into three parts, so be sure to buy the set. You can preview the first 2 chapters here. And for a second opinion, read Hannah Abrahmason’s take at Reformed Reader.

Posted by Jon Dykstra at 7:30 AM No comments: