Notes from the Tilt-a-Whirl 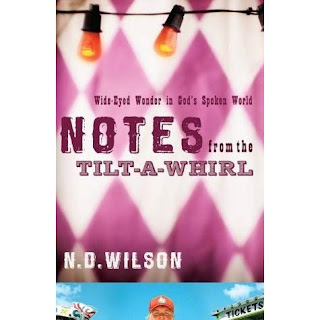 The world is a wild ride, isn't it?

The fun starts already in the title of N. D. Wilson's book. Those of you who have ridden the Tilt-a-Whirl will recognize the analogy to our own spinning planet with an axis that is 23.5 degrees off the vertical.

Of course, the world is not just physically askew; it is off-kilter in just about every way you can think of. The presence of evil in the world is the argument that is typically thrown at Christians whenever we affirm God's claims on all of us. Wilson makes some important points throughout his book that undo (or cut through) this Gordian knot.

Rather than setting ourselves up as critics of God's story, Wilson insists, we need to learn to be good characters - to approach life with wonder, to laugh at ourselves and our often gloriously ridiculous place in the story - to glorify the Author, rather than to try to rewrite His work.

What makes Wilson's work so amusing is that he is willing to follow his own advice To give just two examples:

In the end, Wilson reminds us that it is the end that we have to cope with - our own earthly end, and the end of all current earthly things when the Author (the same one who became a Word in His own story) returns to wrap up the current chapter with His judgments on His cast of characters.

This is far too brief a look at a book that spends as much time mocking Christian sentimentality as it does attacking atheist defiance of our Author, but if you think Wilson can help you better understand and cope with our crazy, tilted world, you can get it here, or here in Canada.

Posted by Jeff Dykstra at 4:30 AM No comments: