The Glory of Heaven

The Truth about Heaven, Angels and Eternal Life 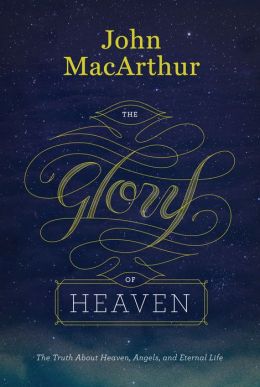 John MacArthur believes "You simply cannot gain a better understanding of Heaven than we are given in Scripture."

But if you check out your local Christian bookstore you'll find a handful of very popular books – million-copy sellers – that dispute MacArthur's claim. They are by people who claim to have visited Heaven and returned to tell us all about it. These authors say that if we really want to know what Heaven is like we should turn to them.

In his opening chapters and appendices, MacArthur shows that in most cases it would be simply ridiculous to turn to these books for any insight. They conflict with one another, and most include elements that clearly contradict what Scripture has to say. MacArthur lets these books rebut themselves by sharing with readers some of the stranger elements in them.

However the most popular book of what blogger Tim Challies has called the "heaven tourism genre" isn't as clearly ridiculous. Heaven is for Real is the most popular and the least peculiar. So what should we think of it?

MacArthur points out that even this book has a peculiarly man-centered description of heaven – this is an account of a three-year-old, who, when he arrives, is given his own little chair so he can sit in God's presence. But in the Bible, when we read of one of God's prophets getting a glimpse, their reaction is one of fear: John and Ezekiel both fall to the ground when they get a look, and Isaiah cries out, "Woe is me!" To get a glimpse of Heaven while still in our sinful state can't be anything other than fearful - this is where our Holy God dwells!

While I think this contrast is pretty telling, I wish MacArthur would have spent a bit more time addressing Heaven is for Real. There are seemingly miraculous events in it that make it compelling and warrant some extra attention. For example, after three-year-old Colton Burpo claims to have gone to Heaven he tells his mom he met a second sister up there, a baby who had died while still in his mom's tummy. His parents never told him about the miscarriage so how could he have known? His father concludes that the only possible way he could have known is if, in fact, he did go to Heaven. However, for anyone who believes in the spiritual realm there is another explanation. There are unseen beings around us all the time and not all of them are heavenly. Satan or his demons could easily have known about the miscarriage. And Satan is not called the Deceiver for nothing – we have been warned that he can appear as an angel of light. Now I'm not saying this is what must have happened. I am saying that there is another possible explanation for what this three-year-old saw that is equally possible.

And that brings us back to MacArthur's book. Rather than turn to any personal account of Heaven, we should turn to Scripture, which is our only source for reliable information.

MacArthur shares what Scripture has to say about Heaven in his book's second half. We learn what Heaven is like, what we will be like in Heaven, and what the Bible has to say about angels. It is all pretty fascinating stuff, and MacArthur wants to leave us with a lingering taste of Heaven. He wants to leave us wanting more, to be always heaven-focused so that, in any difficulties we face, we will be able to endure, knowing that our difficulties are temporary, and our time with God will be eternal.

While I'd say he does a pretty good job, I've also recently reviewed Randy Alcorn's book Heaven and I would recommend it as the better book for giving readers an anticipation of Heaven. MacArthur's strength is in rebutting the many personal accounts of Heaven – this is the book to read if you or someone you know has read or seen the movie Heaven is for Real.

It is available at Amazon.com here
Posted by Jon Dykstra at 12:30 AM No comments:

A Critique of Enlightenment Evidentialism and a Defense of Reason and Belief in God
by Kelly James Clark
1990, 158 pages

I wish I had had this book back in university. Back then, I struggled with whether my faith was reasonable. Unfortunately, this often translated, under the pressure of likeable but strongly atheist professors, into the question of whether I could prove what I believed.

Of course, I couldn't - nor should I have to - and that is the point of Clark's book. In His word, God Himself never proves His existence, and frequently the Bible speaks of the necessity not of proof, but of faith. At the same time, God mocks and condemns those who are stupid enough - willfully stupid enough - to turn to idols and to ignore the signs of His presence in His creation.

The coexistence of faith and reason (not faith in reason) is why Clark titles the two main sections of book "The Way of Argument" and "The Way of Reason."

As a philosopher, Clark loves reason, but he critiques many of the arguments that other philosophers have used to justify belief in God (arguments often used by Christian apologists today) - such as the cosmological argument and the argument from design. Clark also deals with many of the arguments that answer the atheist attack on God's existence by asserting that the world isn't big enough for both God and evil to exist side by side. What distinguishes Clark's summary of the arguments from many others is that he makes clear that the best defence against the atheist argument from evil is the belief in the work of Christ. As well, Clark affirms that evil really is evil, that its power against our faith is not primarily intellectual but spiritual and psychological - and that therefore, the best first defense against questioning God's goodness is not usually an argument, but our willingness to suffer with the sufferer, to be Christlike in our love, as God loved us in Christ. 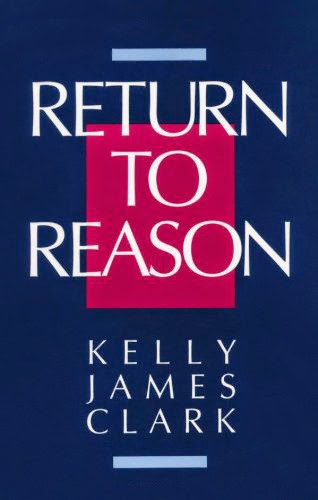 So, if arguments for God's existence and goodness are so problematic, what is "the way of reason"? Clark starts by showing that evidentialism is irrelevant, because God is not a being to be proved, any more than anyone we love is a hypothesis rather than a person. The belief in the existence of other minds is part of what makes us human - and not sociopaths, who indeed live as if no-one else has any real existence. Finally, Clark asserts "The Rationality of My Grandmother." In other words, it is entirely reasonable to believe in the God of the Bible for a combination of reasons that do not necessarily convince someone else. The mere fact that one can believe in God without argument shows the irrationality of the attempt to compel belief with argument. In the end, the Bible and the whole world (and the work of Christ and the Spirit) are what God uses to deliver us from both sin in general and our sinful idolatry of reasoning based on Enlightenment evidentialism.

A great book for any student struggling with the "need" to prove his or her faith!
Posted by Jeff Dykstra at 12:30 AM No comments:

Email ThisBlogThis!Share to TwitterShare to FacebookShare to Pinterest
Labels: adult non fiction, apologetics, books you can read in an evening or two, Christian non-fiction 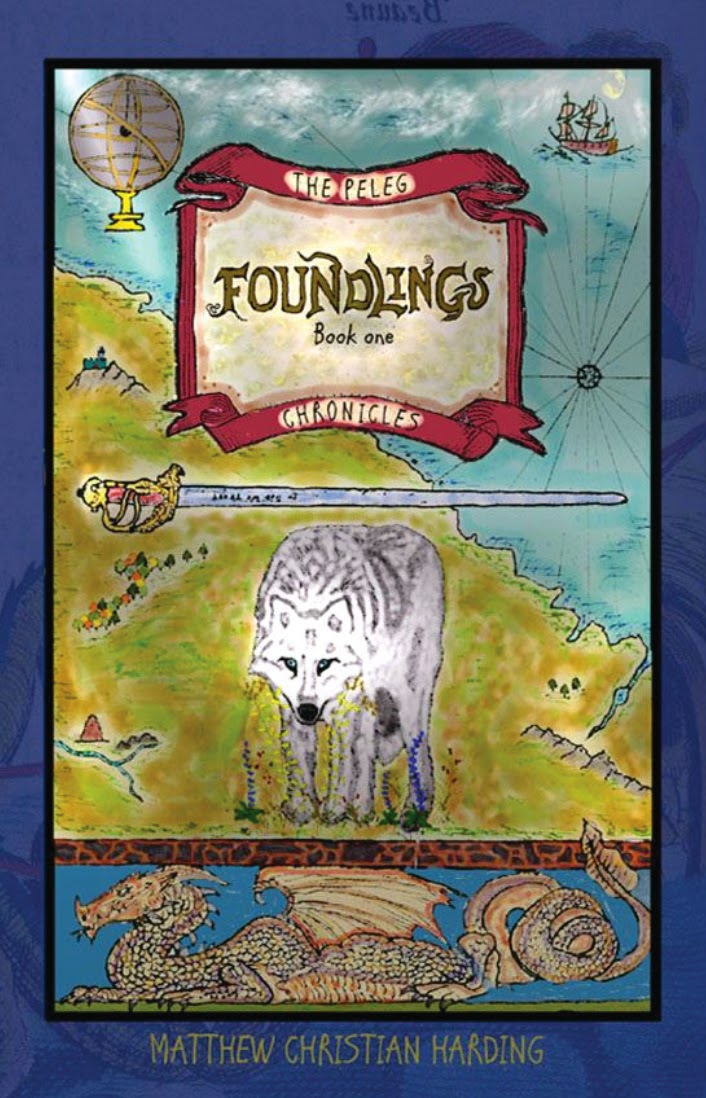 There's nothing like a great hero to make a great story, and author Matthew Christian Harding certainly has a great one in his Lord McDougall.

This is a man who unabashedly awkward with the ladies. Long-limbed and gangly, he moves without grace whenever there is any sort of pretty face nearby. This embarrasses his man-at-arms, Fergus, who thinks his lord should work at being more, well, regal. But McDougall is seemingly unaware. And as awkward as he might be in social situations, he makes up for it in battle, becoming deadly to any who face him.

Foundlings is first of three books in “The Peleg Chronicles.” It’s set in the time a few generations after the flood, when Dragons (dinosaurs) and Giants still lived, and where a race of Dwarves were created by a king who kidnapped short folk to work his mines.

I think I may have gotten this book for free (in exchange for eventually doing a review) but after looking at the back cover I wasn't eager to start reading. The back blurb  was touting it for what it didn't include: “No Magic – No Evolution – No Humanism.” That is all fine and good – I’m not a big fan of any of those – but when you brag about what's not present that raises suspicions that what is inside isn't much to boast about. Just think of a fellow who's told that his blind date is "not hideous, not all that argumentative, and not dumb as a rock.” Only a very brave man would proceed!

So I put this on my shelf and forgot about it for a few months. But when I finally did dare to proceed, I was surprised at just how good it was.

This is author Matthew Christian Harding’s first go at fiction, so there are some sections are a bit unpolished, but the series is inventive and the story engaging. Harding's dialogue is also far more realistic that most other Christian fiction. Good fantasy writing offers an escape from the real world, but also offers a degree of insight into that same world. In Foundlings the insight comes in the way the characters share the Scriptures. They share it naturally, calmly, and in exactly the sort of way you could imagine yourself doing it if you only had the courage to do it. There is nothing forced or fake, or preachy about it. It is brilliant dialogue, and inspiring too.

If I had to describe it in one word, it would be quirky. The plot involves a disinherited lord, McDougall, and his man Fergus Leatherheard rescuing maidens, fighting giants and investigating a cult of dragon priests.

So far I've tested this on one niece and one nephews, both in their early teens, and I'm one for two: one loved it, and one thought it was just okay. I'll add that I also loved it. The only caution I'll mention is that it would be better to think of this as one book broken into three volumes, than as three self-contained books - when you finish the first it doesn't feel like you've read a complete story.