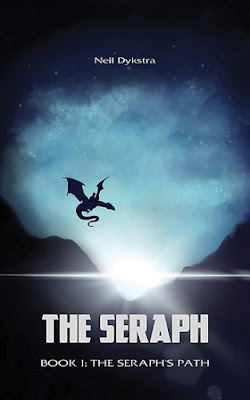 Maybe this is a bit odd to review, what with me sharing the same last name as the author. But this is a fantasy title, so I had to take a peek. And once I got started I wasn’t going to hand it off. Besides, the two of us aren’t actually related. I know Neil, but only well enough to recall he is the superior volleyball player, and nowhere near well enough to have had an inkling he could serve up something like this. It’s remarkable!

The Seraph’s Path has quite the cast of characters, but it is mostly the story of Dyrk, a young horse trainer who wants to make something of himself, in part, because his parents don’t seem to think about him much at all. Our story begins with Dyrk determined to enter a competition his father won’t even let him watch. Somehow he finagles his way in, and reaches the final round, a free-for-all among 16 mounted soldiers-in-training, with the last man standing guaranteed entry into the King’s own College. I won’t tell you what happens, but I will say that for every good thing that happens to Dyrk something bad soon follows…and vice versa.

The wonder of fantasy fiction is that anything can happen. Young children can open a wardrobe and get transported to a world of talking beasts. Or little fellows with hairy feet can be trusted with a mission that the most powerful could never accomplish. Or a horse trainer can suddenly find himself delivering the mail mounted on a flying tarn.

The problem with fantasy fiction is just the same: anything can happen. That means if the author doesn’t have a tight hold on the reins the story can run amuck, and quickly lose all connection with the real world. If you haven’t read much fantasy, you might think a world of dragons, gryphons, and flaming swords couldn’t possibly ring true. But the author has pulled it off. In The Seraph’s Path, Dyrk doesn’t understand the opposite sex, and he’s prone to dig himself deeper via ongoing procrastination, and then he can’t figure out how best to ask for forgiveness. There’s something very real about this made-up world.

I was also impressed with how patient the author is and I’ll give one example. In this world, the god Arren is served by seven Seraphs. Dyrk sends his prayers via those angelic servants because he thinks Arren is too holy to approach directly. If that strikes you as Roman Catholic-esque, I’d agree. But isn’t Dyrk our hero? So how can he, via his repeated prayers, be teaching us something so very wrong? Well, a few hundred pages in Dyrk has his first encounter with people who talk to Arren directly. And he doesn’t know what to think about that.  By the end of this book, the issue is still unresolved, but our hero has been given something to think about.

I can only think of one caution worth noting. At one point a key character faces sexual temptation, and while the passage is not lurid – there’s nothing here that would make grandma blush – it is sad and realistic enough that pre-teen readers might find it distressing.

Dykstra has engaged in some downright Tolkien-esque world-building, with not only exotic creatures and nations to discover, but layer upon layer of legend and history shaping the events. If you never made it through The Hobbit, or you haven’t read a fantasy book with a glossary in the back to help you keep track of the characters, then this might be too intense a read for you.

But if you want a whole new world to explore, and a story that’ll not only entertain but really get you thinking, you’re going to love The Seraph’s Path. I finished this nearly 500-page tome in 3 days, and the only downside to it was the cliff-hanger ending. So I was very happy to discover that the 700-page sequel, The Seraph’s Calling has just been released. I look forward to finding out what happens next!


You can buy both books at Amazon.com and Amazon.ca.
Posted by Jon Dykstra at 12:20 PM No comments: 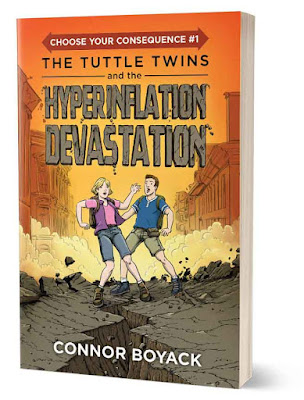 In The Hyperinflation Devastation, author Connor Boyack has taken that concept and expanded on it, creating a 400+ page “Choose Your Consequence” adventure to teach teens various lessons about economics.

In this, the first book in the series, Emily and Ethan Tuttle, a pair of 15-year-old twins, head out on their own to the small South American country of “Allqukilla.” If 15 strikes you as young to be out without parents, I’m with you. However, these two are a particular independent pair who have spent the last year planning and saving for this trip. They want to go to Allqukilla to check out the country’s ancient ruins.


But is it to be? Right after their plane arrives, they see local news reports warning about an impending earthquake and it’s here that readers face their first choice. Are the Tuttle Twins going to have an incredibly short adventure and head back on the very next plane, or are they going to go on to their hotel? Of course, no reader is going to take the cautious route, so onward and forward the adventure continues. While exactly what happens depends on the choices a reader makes, the twins will encounter that earthquake, and then, with power disrupted, they’ll have to deal with roads in bad repair, hyperinflation, a lack of available food and water, and no cell phone service, as the two figure out their way home.

The author’s economic outlook is a small government, libertarian one, which comes out in the lessons the twins learn. So, for example, in one story branch, they end up in a small village in the hills that still has power because they have never relied on the government to provide it. In another branch, they encounter some not-so warm-hearted help – entrepreneurial sorts who will do them good…for a price. The twins sometimes get entirely altruistic help, but the point is, they also get help from people who wouldn’t otherwise be helpful, except that it was in their own self-interest to do so. The lesson here is that the free market is important because it gives people a motive to provide things other people want.


While this is intended as an educational story, Boyack doesn’t beat readers over the head with the lessons he’s trying to teach. Only once, in the 8 or so different story arcs does a character offer up a prolonged economics lecture. But even then, it isn’t too long.

The one caution I would offer deals not with this book, but with the author. He writes from a generally Judeo-Christian, libertarian perspective. Often times those two perspectives can match up quite nicely since both Christians and libertarians recognize that the government shouldn’t try to be God. Thus we both believe in some form of smaller, limited government, and sets us both apart from the many who call on the government to solve whatever problems they face.

But in some of Boyack’s other books, his libertarian perspective comes in conflict with his Judeo-Christian perspective. In The Tuttle Twins Learn About the Law (one of 10 Tuttle Twin picture books he’s written for younger readers) he teaches readers that governments gain their authority from people, and not God. Based on that assumption the author argues that governments should only be able to do what people are able to do, so just as it would be wrong for a person to forcibly take money, therefore the same must be true of government. But this simply isn’t true. God has empowered governments to do some things which individuals must not do, and taxation is one of them (Luke 20:25, 1 Peter 2:13-14).

The libertarian perspective in Hyperinflation Devastation is more restrained, and thus in keeping with a Christian worldview that understands God as distributing powers and responsibilities not simply to the state, but to parents, and the church, and individuals too.

I would recommend this for any kids from 10 to 15. The adventure is a solid one, and the Choose-Your-Own-Adventure component will grab their attention.

Yes, this is an economics lesson, but it is a generally subtle presentation that never gets in the way of the story. That allows most kids, whether they are politically-inclined or not, to enjoy this. But because the economics angle is so very different from what they are reading in other books, it may well spark an interest in learning more about money, inflation, politics, and more.

It may interest parents to know there are two other titles in this “Choose Your Consequence” series so far, but as I haven’t read them, I can’t yet recommend them, though the series can only be purchased for now, as a 3-book set here.


There is one mistake in the book, on page 388, where we are directed to Page 335 but should be directed to Page 111. I recommend some of the Tuttle Twin pictures books here.
Posted by Jon Dykstra at 12:30 AM No comments: 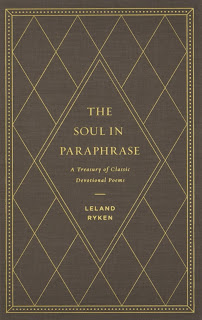 Words of Delight:
A Literary Introduction to the Bible
by Leland Ryken
540 pages / 1992 (second edition)

The Soul in Paraphrase:
A Treasury of Classic Devotional Poems
by Leland Ryken
262 pages / 2018

Everything that I have read by Leland Ryken shows his submission to the "words of delight" in the Old and New Testament, and these two books are no exception.

Words of Delight is itself a delightful book, in which Ryken shows that the Bible is not only "breathed out by God and profitable for teaching, for reproof, for correction, and for training in righteousness" (2 Timothy 3:16), but also "sweeter than honey" (Psalm 19:10a). What makes Ryken's analysis of Scripture so valuable is that he shows that Scripture is not only the finest literature ever written, but that its literary quality does not undermine its authority. Instead, Scripture's beauty only reinforces our conviction that behind it is its ultimate Author, God Himself. One of the ways that Ryken does this is to demonstrate that


As well, Ryken demonstrates that even the prose histories and epistles of the Old and New Testaments are as literary as the more obviously poetic passages of Scripture. I found many new insights that are as helpful in my own private reading of the Bible as they will be in teaching it. Ryken's book was fascinating reading, and will bear repeated reference in the future.

The Soul in Paraphrase is more clearly a reference work, and could make a great textbook for a Christian teacher's English course, but would also make a unique way to structure devotions for several months, since it deals with 150 devotional poems. Ryken shows the Scriptural inspiration and/or Christian connections for these poems, including those written more generally about nature and human relationships without specific mention of spiritual issues, or even from poets not generally identified as Christian poets. Ryken makes the case that it is also the Christian reader's approach to poetry that determines whether it can be read devotionally, and demonstrates that in his analysis of various poems. In his appreciation for the poems, Ryken invites us to compare their themes to Scriptural wisdom, often citing specific Scriptural passages.

In these two works, Ryken demonstrates the literary excellence of God's inspired Word, and shows how His Word is the inspiration for much classic poetry. If you want to read about inspired writing, you can find Words of Delight here, and here in Canada. If you want to read some writing inspired by inspired writing, you can  find The Soul in Paraphrase here and here in Canada.
Posted by Jeff Dykstra at 5:00 AM No comments: