A Short History of the Boxer Rebellion: China's War on Foreigners, 1900


If you love history (like me)  you're always on the hunt for a book that not only expands your knowledge, but is also a really good story. The Boxer Rebellion is both a good historical narrative and a really good read.

The Boxer Rebellion took place at the beginning of the 20th Century and was an uprising by the Chinese people led by a quasi-religious sect known for their martial arts style, and thus dubbed "boxers." The Boxers were quietly encouraged by the Imperial court in their battle against the foreigners who had come to dominate much of China's economy and politics.

The book carefully displays the Chinese xenophobia towards the British, Germans, Americans and others who were busy exploiting China, but focuses on the racist attitudes of the foreigners towards the native Chinese. These people dominating China believed they were superior to the Chinese and thus well within their rights to mold the county into they image that pleased them, whatever the Chinese may have thought of that.

The author attributes the racist attitudes of the foreigners towards the Chinese to Social Darwinism. Applying the Darwinist Theory of Evolution to humanity, it was only reasonable to assume that some cultures and some "races" had evolved further than others, and that the fitter should rule the less fit.

What makes this book a really good read is Preston's abundant use of quotes from the diaries and other writings of the foreigners in China. Her liberal use of quotations really gives a sense of the actions and emotions of those directly involved in the events. It also reveals the callous attitudes of many of the foreigners who were under siege by the Boxers. Though the foreigners had given sanctuary to the Chinese Christian converts who had also been attacked, they seemed unwilling to equally share the food and resources at their disposal. While the whites ate their fill, many of the Chinese Christians, literally across the street, starved to death. The diaries reveal the irony that the foreigners in China were upset by the Christian converts' suffering yet failed to raise a finger to help them.

Cautions: Since this book tells the story of a violent period in Chinese history, violent scenes are often depicted, occasionally with a lot of detail. The detail is not sensationalist but it is sometimes graphic. While it certainly adds to the story, it can be skipped over if you'd rather not know quite so much about the brutality.

Conclusion: Read this book if you want to understand why more than 100 years after the Rebellion the Chinese still seem cautious about embracing Western values and practices. The unChristian attitudes displayed by the many foreigners, who were at least nominally Christian, appear to have set up a barrier between East and West that has yet to be taken down. This book will not only help you understand China and Western culture, but will force you to examine yourself and wonder whether, just maybe, you think yourself a little superior to someone not quite as evolved as you think you are.
Posted by Linus at 1:31 AM No comments: 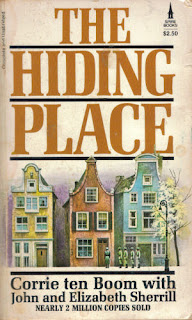 
When our school adapted this book into a play, it was hard for some of the older members of our school community to watch, because it reminded them so strongly of the hard times in the Netherlands in World War II. This classic memoir tells how Corrie Ten Boom and her sister Betsie were called by God, and prepared by Him through the compassionate example of her father, to hide Jews from the Nazis and cope with the resulting brutality of the Germans.

The book is incredibly suspenseful in its account of how the Ten Booms seek to keep their activities hidden from the occupying Germans. It is also inspiring to see how Corrie's father shows his Christian faith in response to the soldiers'  persecution; how Corrie learned to love her persecutors through the example of her physically weak but spiritually strong sister Betsie, in a concentration camp; and how God used Corrie to bring His good news even to those who ran the concentration camps.

Posted by Jeff Dykstra at 7:48 AM No comments:

shows, with practical examples and real-life stories,
1. how young Christians can pursue peace and unity by following the Biblical principles in Matthew 18 and many other passages:
2. when to let it go, and when not to;
3. how to confess your sins to God and your neighbour;
4. how to forgive;
5. when and how to negotiate; and
6. when and how to defend your rights.
This book would make a great book for school libraries (it's in ours) and church libraries, devotions or group study for young people, or a textbook for a life skills course. More importantly, if young (and old) people lived more consistently by the principles in this book (many of which will remind you of good Biblical principles for discipline in church, home, and school), the body of Christ would be strengthened and equipped for greater service and greater glory to God (Ephesians 4:1-16).
Posted by Jeff Dykstra at 8:19 AM No comments: 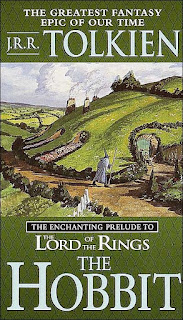 Tolkien’s work is the best old-fashioned fairy tale ever written - one I enjoyed both listening to and reading aloud to my own sons. The main character, Bilbo Baggins, is just the kind of hero that children love: a small person (much like themselves) who gets into adventures - facing trolls, goblins, spiders, hostile elves, and a talking dragon - without meaning to, and manages to get through with a little cleverness and a good measure of desperate hope (just like the first time a child loses his parents in the mall).

The ending battle is a little grim, just like a good fairy tale should be, as it shows just how deadly both vanity and greed are, even for the “good guys,” but the central character makes it through.

Buy The Hobbit at Amazon.com though this link and they'll send a dime or two our way at no cost to you.
Posted by Jeff Dykstra at 7:41 PM No comments:

Wise Words: Family Stories That Bring The Proverbs to Life 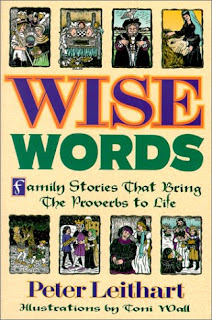 What makes Peter Leithart’s 18 fairy tales so entertaining as well as wise is how he plays with the images, characters, and events of classic fairy tales, Biblical accounts, and history that we already know.

The Preface (which you should skip if your listening to the audiobook version with your kids) explains how Leithart seeks to echo those familiar stories to make the wisdom of Proverbs more vivid, as each story’s “moral” is a verse from that Biblical book. For example, the first villain of the story “King Jacob of the Green Garland” is called King Eric the Red (but not for the reason you might think). When this cruel king flees for his life from an invading king, he is reduced to eating grass and drinking muddy water (much like a certain Babylonian king). Eventually, Eric’s younger brother, Jacob (a shepherd who treats the poor kindly and justly, like both David and the Son of David) restores order, and the story proves the verse from Proverbs that explains, with suddenly greater vividness and meaning, how a king is established through faithfulness, and how through love his throne is made secure (Prov. 20:28)

What is enlightening about the stories, besides the obvious references to Proverbs (some of which are a bit of a stretch, but can still stimulate some worthwhile discussion) is how often Leithart’s stories are clearly redemptive-historical, in that they connect the book of Proverbs to the story of Christ’s coming that runs through the whole Bible. For instance, one verse says how it’s better to live in the desert than with a nagging wife. That can make the guys feel pretty smug, but not once Leithart has shown how the worst wife in the world is “Meribah, the Goatherd’s Bride” – a story that should remind us of the frequent ingratitude of Christ’s bride, the Church. No gender excluded in that moral.

This is a great book, and good audiobook too. If you’re looking both for ear candy on those long car trips and food for thought for the New Testament Church, Wise Words has the wit and wisdom you want.

Buy "Wise Words" using this link and Amazon.com will send a tip our way at no cost to you.

Every Christian should read Jane Austen, as Leithart explains in his Miniatures and Morals
Ditto for Shakespeare: Brightest Heaven of Invention

Posted by Jeff Dykstra at 1:35 PM No comments: 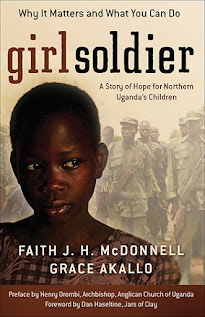 Girl Soldier shows both just how sinful man is in the real world of civil-war-torn Uganda after the fall of the dictator Idi Amin and how God’s grace healed the psychological and spiritual trauma of children kidnapped to fight for rebel forces at that time. Grace Akallo herself was conscripted into the grotesquely misnamed Lord's Resistance Army, and chapters telling of her ordeal and miraculous escape alternate with chapters by McDonnell telling of the rise of the Lord's Resistance Army in the midst of Uganda's political conflict and spiritual possession by demonic religion.
By the end of the book, you will be both horrified and inspired to know more about how you can help the child soldiers of Uganda and elsewhere.

If you like Girl Soldier, you may also appreciate Hitler's Youth, about the hundreds of thousands of German children who were conscripted into the Nazi dictator's ideological cult.

Posted by Jeff Dykstra at 6:34 PM No comments: