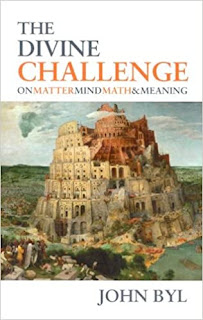 The unfinished Tower of Babel on the front cover demonstrates the ultimate fate of our age's main attempt to challenge God's sovereignty over matter, mind, math and meaning. John Byl how materialistic naturalism seeks to establish a basis for human life apart from God, and demonstrates how it fails in the four key areas mentioned in the book's subtitle.

While I will outline Byl's argument below, what makes his work so compelling is how he sets up a debate between the proponents of naturalism and God Himself. Byl opens each chapter with quotations from famous naturalist thinkers counterpointed by quotations from God's word, the Bible. The rest of each chapter demonstrates how that debate has played out in naturalist thought and Christian understanding.

First Byl outlines the basics of a sound worldview, and then looks more specifically at the history and essential beliefs of naturalism. The next five chapters show how those beliefs impact naturalists' understanding of matter, mind, and math. After considering the failure of naturalism to find meaning in those three areas, Byl introduces the basic beliefs of the Christian worldview, and demonstrates how the Christian worldview brings meaning to the understanding of matter, mind, and math.

Finally, Byl concludes that because the Christian worldview, unlike the naturalist hypothesis, fits our natural, commonsense view of the world (matter), our own selves (mind), and our belief in infinity (math), it is uniquely able to withstand the onslaught of the chaos of post-modernism and paganism.

If you want to learn more about God's challenge to the secular quest to live life without Him, you can find John Byl's book here, and here in Canada.


Posted by Jeff Dykstra at 4:00 AM No comments: