But Not The Hippopotamus

After a few more pages of forlorn Hippo looking wistfully at what others are up to, (and the repeating refrain, “…but not the Hippopotamus”) the rest notice how neglectful they’ve been, and invite Hippo to “come join the lot of us!”

Now as we all know invitations are nice, but sometimes people turn them down, even when they really want to go. So we are in suspense as shy Hippo ponders what to do: “She just doesn’t know – Should she stay? Should she go?” So it is with joy that we turn the page to see her exclaim: “BUT YES THE HIPPOPOTAMUS!”

That is not, however, the end of the book. One line follows: “…but not the armadillo.” This small creature is staring sadly after Hippo as she joins the group. It is a great end to a remarkable little book. Yes, it is full of fun rhymes, and a great rhythm (I love reading this one to my little girl) and has friendly engaging pictures too, but it is this final line which really sets it apart. Here we see that not only should we include others in our groups, but even when we do step outside ourselves, and make that invitation, doing it once, to one person is only a start. There are still others who are being forgotten and could use a friend.

And if your son or daughter is in Hippo's position, a different sort of lesson can be taught, to show them that they have to seize opportunities when they come. Poor Hippo would still have been lonely if she had said no.

I've now spent more than 300 words reviewing a book that is no longer than 150, so it is time to conclude, but I will add the heartiest of recommendations. If you have little kids, or know anyone with little kids, this is a rare treat, and definitely a really good read. 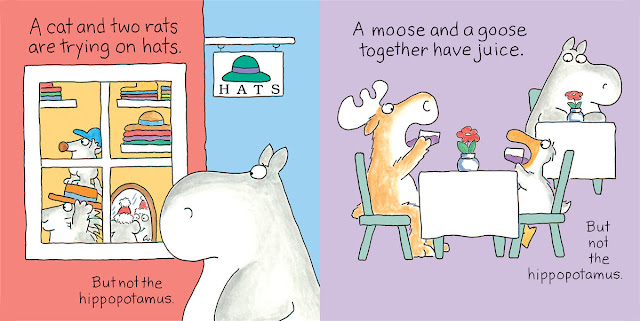 The True Story of Noah's Ark

This is the book I wish I’d written. The Noah’s Ark story as told in the Bible often brings up a lot of questions about what it must have been like to build, for so many years, such a huge structure, as designed by the Divine Architect.

What was the reaction of Noah’s family, his neighbors, his countrymen? Where did he get all the equipment and supplies? How did he and his family cope with the ridicule and jeering he no doubt received? And then, after more than a hundred years, what an awesome sight! The animals arrived from far and wide and entered the ark.

The talented author and the creative illustrator have built on the biblical facts in a way that is honoring to our Heavenly Father and gives him the glory.

This book is great for reading to younger children (5 to 7) but older ones (8 to 12) will enjoy reading it for themselves. The beautiful illustrations will generate awe and many questions.

As a bonus, the book ends with a closer look at the ark’s size and structure; with illustrations it compares its volume to that of a very large number of railroad cars, and its 450-foot length to that of a standard 300-foot football field.

I highly recommend this book for the little ones, the older ones, and, I’ll bet, dad and mom will be fascinated by it too. Also, a great tool for primary teachers. You can buy a copy at Amazon.com by clicking here.
Posted by Jon Dykstra at 6:00 AM No comments:

There are a lot of beautifully drawn children's books, but not nearly as many that tell a beautiful, impacting story.

Dogger (also published under the title Dave and Dog) is the story of a little boy and his favorite stuffed animal, Dogger. The two are inseparable, so when Dogger goes missing, little Dave is very sad. Even his big sister Bella's generous loan of one of her stuffed animals does little to cheer Dave up. The next day, when Dave discovers Dogger on a sales table at the neighborhood fair, the race is on - Dave needs to find and tell his parents before somebody buys Dogger!

Though the author uses only a simple selection of words, she does manage to pack some punch, so the text along with her expressive pictures will have readers of any age engaged and empathetic - when Dave and his parents arrive too late and they see Dogger in the arms of a little girl who is already walking away, it get almost too tense!

Fortunately little Dave has a big sister, Bella. Her quick action and generosity save the day, and while I won't tell you exactly how (I've already said too much) I will mention Bella is a big sister worth imitating. There is a definite moral to this story, and it will not be lost on our little ones.

In 1977 Dogger won Britain's highest prize for children's illustrated books, the Kate Greenaway Medal, and then in 2007, for the 50th anniversary of this prize, it was selected as the favourite Kate Greenaway Medal winning book of all time.There are almost a thousand words in this book, so it is not for the very young, but any preschooler, on up to a first and even second grader who is content to sit still for ten minutes to read stories with mom or dad will find this an engaging story. And it makes a very good gift to buy first children who are adjusting to a new arrival in the family (one reviewer on Amazon.com had already bought 15 copies of this book and given them away to friends expecting second children).
Posted by Jon Dykstra at 1:23 AM No comments: