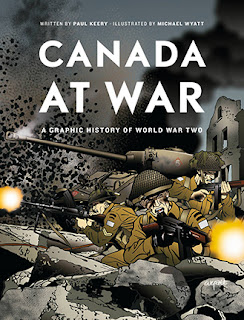 Half way through Canada at War I realized it was filling in an odd gap in my education. I had read about the Dutch experience of World War II in great kids’ books like Anne de Vries’ Journey through the Night and Piet Prins’ Scout series, and a love of classic war films like Casablanca and Twelve O’Clock High had given me a good sampling of the American perspective. But I don’t know if I've ever seen the war through Canadian eyes.

Canada at War is a “graphic history” - otherwise known as a comic - but it would be a mistake to dismiss this as fluffy kids’ stuff. It is weighty and well-researched and would be best understood as an illustrated history textbook. It includes chapters on: Author Paul Keery, and illustrator Michael Wyatt do a masterful job of explaining, in just 176 pages, how Canada went from having next to no military to, in the space of just five years, becoming the third most powerful fighting force in the world. And they give readers a good understanding of just how much we owe the 1 million men who served.

Cumulatively the pictures are worth many thousands of words. Descriptions can’t quite convey the information available in a picture of a sailor waste deep in water on a leaky Corvette assigned to protect otherwise defenseless supply ships on their way to Britain. There is also a lot packed into a single frame, where we see a bomber pilot relaxing at his home base, happy to have survived another bombing run, but knowing that he has only a 1 in 4 chance of living through to the end of his tour.

The style of the visuals is also striking: it’s a mix of quite realistic computer animation and solid simple lines. Illustrator Michael Wyatt shows us action and lots of it including planes being blown apart and submarines being sunk. Wyatt uses great restraint, showing the results of war - the blood, death and destruction - without dwelling on the gory detail. This bloody detail is most often muted, either by being obscured (often times by making use of silhouette images) or by being skipped right over. For example, in one exchange we see a soldier with blood on his face, but only learn how it happened from the caption. But as should be expected in a “graphic history” or World War II, there are a few “graphic” frames. However, Canada at War is intended for a young adult readership, so these pictures are unlikely to shock them. I've included a few of these frames immediately below this review, so that parents can evaluate them for themselves.

An impacting book, that will give this generation a far better understanding of what their grandparents and great grandparents endured to give them the Canada they see today. You can pick up a copy at Amazon.com by clicking here.

Posted by Jon Dykstra at 9:06 AM No comments:

Paul Tripp notes, “as Christians we say that sex is a wonderful gift from God, yet we are strangely silent on the topic, and uncomfortable in the rare instance when it is discussed.” Our silence means our teens are turning to the world to get answers to their questions, and that’s the very last thing we want. So silence is simply not an option.

How then can parents equip their children? The first step is to present them with a biblical model of sexuality, and then establish biblical goals for our teens in regard to sex. Tripp convincingly argues that abstinence is hardly a worthy goal – it isn’t even a good bare minimum: “To be physically abstinent is not the same as being morally pure. Moral purity is a matter of the heart. If the heart is not pure, the body will not be kept pure for long.” In keeping with this Tripp notes that we can’t simply put off the old man (ie. “Don’t have sex”) but need to provide our teens with a positive “put on” agenda (Eph. 4:22-24). So we need to present them “some practical, godly goals for the teen’s relationship with the opposite sex.” He concludes with a “threefold plan for helping teens” that will give parents a good foundation for the talks (note this is a plural - and not “the talk,” singular) we need to initiate with our children.

The author has packed in a lot in this slim volume, and gives readers much to consider. At just 27 pages, it isn’t all that parents should read about this subject but it sure is a great one to begin with.

Posted by Jon Dykstra at 3:28 AM No comments:

Email ThisBlogThis!Share to TwitterShare to FacebookShare to Pinterest
Labels: books you can read in an evening or two, Christian non-fiction, counseling, parenting, sex, Tripp

Like the first two books of C. S. Lewis's space trilogy, That Hideous Strength links up with a famous literary legend. In this case, it's the story of King Arthur. What's more, it also serves as the inspiration for a more contemporary young adult novel - Frank Peretti's Nightmare Academy, the second (and last so far) in his Veritas Project series.

This novel is longer than the first two in the trilogy combined, and that is only fair, since in many ways it climaxes Ransom's fight against the foolishness and evil that man has brought to two other planets. Back on Malacandra both he and Weston tried to understand the inhabitants in strictly scientific terms, missing a huge part of the total picture, and being rebuked for their ignorance. On Perelandra, Ransom fights a feminism that demands that authority justify any restrictions on our individual freedom.

Where is the Cake?

Thé-Tjong Khing was born in Indonesia, studied in the Netherlands, and is now one of the Netherlands’ best-known illustrators and authors. His books have been translated into several languages, and Where is the Cake? must have been the easiest as, except for the title, it is a wordless book.

The main story involves a chase after two possums who have taken Mr. and Mrs. Dog’s cake. The action takes place on large pages (even a bit larger than the pages of a magazine) so there is plenty of room for detail, and for a host of different animals. There are more than 30 characters on each page, and almost as many storylines!

I “read” this with my two-year-old daughter and we had a great fun trying to keep track of what everyone was up to. While it is wordless, it still lends itself to a lot of interaction. I was constantly talking to her about what must have happened “in between” the pages and congratulating her as she found Mr. and Mrs. Dog once again. She loved it, and her dad did too because it was book I could read again and again (as parents are often required to do) and keep finding new things.

Great fun, and beautifully done. There is a sequel called Where Is the Cake Now? which continues the story. It is also very good, but doesn't quite duplicate the charm of the original.