Half-way through I still wasn’t sure if this was meant for Christians, or searching non-Christians. The answer is, both. Sproul wants to help both groups with the questions that come up in university and college.

For Christians the answers and illustrations here will be an encouragement and also equip them to talk about God with their classmates For searching non-Christians, Sproul pushes them to contrast and compare their current worldview with the Christian one.

To best explain the book I need to give an example. At one point Sproul asks: “What sets the Christian faith from all other religions?” He explains it comes down to the answers to two questions:
Of all religions that ever claimed your allegiance, only Christianity answers both questions with the same one-word response: God. I’d not heard it quite like that before. Both Christians and non-Christians are sure to find such succinct explanations helpful. And the book is full of many more!

Highly recommended for college and university students, or any young people who are discussing Christianity and other religions.

Email ThisBlogThis!Share to TwitterShare to FacebookShare to Pinterest
Labels: books you can read in an evening or two, Christian non-fiction, college, prodigal, Reformed, Sproul

The Cat Who Wore a Pot on Her Head

This is just plain goofy fun. Bendemolena is a little kitten that is part of a big family - a noisy family! As the story begins Bendemolena finds a pot, plops it on her head and discovers that her loud home becomes a lot quieter when her ears are covered, so she decides to keep wearing it.

Problems start when her mother, Mrs. Cat, has to leave to help a sick friend, and takes the now hard of hearing Bendemolena with her to relay messages to the rest of the family back home. Mrs. Cat says, "Bendemolena, Bendemolena, run home and tell your brothers and sisters that it's time to put the fish on to bake."

But with the pot pulled tight over her ears Bendemolena isn't quite sure what her mother said: "Did she say put the smish on to fake or put the bish in the lake?" She concludes what her mother must have said was, "to put the soap in the cake" so that's what she tells her brothers and sisters to do.

My three-year-old loved every guess Bendemolena made, and all the silliness that happened each time she came home with another mixed-up message. I'm sure we'll be revisiting this giggle-inducing book regularly.

You can pick up a copy at Amazon.com by clicking here.
Posted by Jon Dykstra at 12:30 AM No comments:

Lord of the Flies 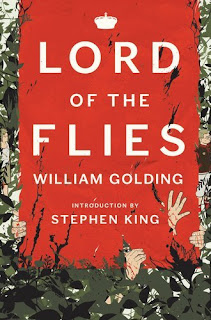 First off: a caution about the author of the introduction. I would not recommend any book by this author. Stephen King's horror novels fail to do one thing that this novel does very well, and that is to make violence truly horrifying.

As a study novel for many English teachers, this story is so well known that it's hard to say anything really new about it. I even read an article once, when the television "reality" series Survivor began, that compared it to this novel.

Actually, that's a good place to start in talking about Golding's story. Survivor fails as art because it succeeds as entertainment (in the worst way). It makes the backstabbing treachery required to win a million dollars (by getting the others voted "off the island") amusing and flattering to our self-righteous sense of superiority to its crudely cunning contestants. Golding, though, shows us that even "the best laid plans gang aft agley" (as Robert Burns put it). In other words, while Survivor (and many daytime talk shows) enable us to compare ourselves (favorably, of course) to the so-called "trailer park trash" of our world and think like the Pharisee in Christ's parable that we are "not like that publican over there," Lord of the Flies shows us that "there, but for the grace of God, go I."

Not that Golding was a Christian. One of his novels depicts the wanderings and conflicts of a group of Neanderthals, and the few seemingly Biblical references in this novel are double-edged. For instance, one character seems Christ-like in his compassion and meekness, and cries out something about "a body on a hill" - a seeming reference to the Crucifixion - but that character also seens to hear the voice of "the lord of the flies" (a literal translation of Beelzebul, a Biblical name for the devil) in the midst of what seem to be epileptic fits.

So... Golding is not writing from a Christian perspective; however, Christians will still find much worthy of consideration in this story. Golding had served in World War II, and had plenty of evidence of man's inhumanity to man. This hard-won insight into man's innate bent toward evil enabled him to see what Reformed Christians call total depravity.

The novel begins with the crash landing of  a plane on a desert island. The boys inside are being evacuated from England due to the threat of a nuclear war. How these young boys set up their own new society without any adult supervision is the point of the story. In the early Christian church, Pelagius believed that our sinful behaviour was learned rather than inborn. If so, these boys should have an immense advantage over the adults whose war threatens to destroy civilization, but do they?

If, on the other hand, we are conceived and born in sin, the boys' reconstructed society should show man's evil on two levels. In the first place, various boys or groups of boys highlight various aspects of man's nature - his reason, his spiritual side, his common sense, his desire for power. The Greek philosopher Plato believed that our main problem was our inability to balance these various parts of our personality, and the boys' society shows exactly how the best sides of our nature are overwhelmed by the worst in us.

Secondly, various boys or groups of boys remind us as we read of groups running amok within a dysfunctional society like the military, intelligence agencies, government, mystics, and scientists. While various ideologies tend to idolize certain kinds of people, the Christian understanding of total depravity would predict that each group has its own weaknesses, temptations, and sins. Golding indeed shows how there are no "good guys" on the island (just as King David, the man after God's own heart, was yet guilty of many sins). The one who gets closest, sadly, has the least influence.

The novel does not end terribly hopefully. Even Golding himself, in an interview, revealed that one of the characters that people tend to trust the most in the novel got everything completely wrong. So... what hope does the novel leave Christians with? The beauty of the novel is that one of the characters, the one through whose eyes we have viewed most of the story, has gained enough insight into himself and the other boys to grieve the evil they have done, and most importantly, to stop making excuses for it. The novel challenges us, with the added insight of God's word, to do the same for ourselves.

You can pick up a copy at Amazon.com here and Amazon.ca here.
Posted by Jeff Dykstra at 12:30 AM No comments:

Morning Star of the Reformation 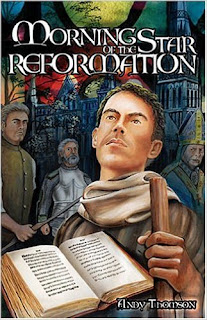 If Martin Luther was the "Father of the Reformation" then John Wycliffe must be its grandfather. Like Luther would one hundred years later, Wycliffe argued for sola scriptura, translated the Bible into his own language, denounced the pope and spoke against indulgences.

Morning Star of the Reformation is a fictionalized biography of Wycliffe that gives a fascinating feel for the time. We learn what city life was like, what the common people believed about the Church, what they ate, how they slept and what they did for fun.

Morning Star is intended for children 12 and up, but I think adults looking for a quick introduction to Wycliffe will enjoy it too. It is downright fun to be able to look back in history and see how God was setting the stage, a century beforehand, for the appearance of Luther and Calvin.

It is important to note this is a fictionalized biography. This is particularly true in the first half of the book, about his young life, where most of it is is made up. That isn't a big problem if readers understand which characters and events are fact and which are fiction. However the author waits until the last two pages to clarity how much of this is actually historically accurate, so my one criticism of this very enjoyable read is that the last two pages of the book would have been much better placed at the very beginning of the book.

So my heartiest recommendation... if you read the last couple of pages first.

If you are interested in buying "Morning Star of the Reformation" you can support this site by purchasing it from Amazon.com via this link.

Posted by Jon Dykstra at 3:50 PM No comments: