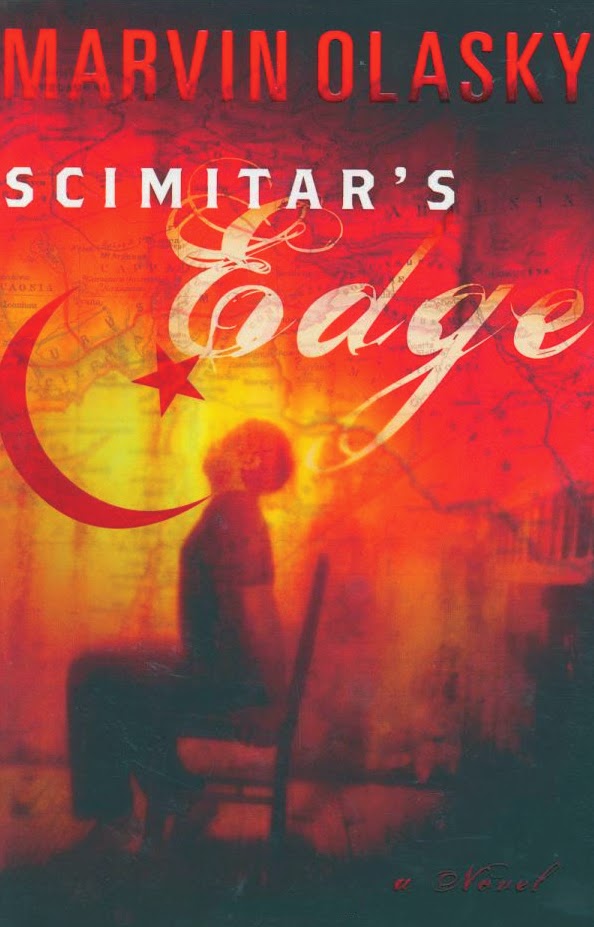 When a party of four Americans vacations in Turkey they become the target of terrorists who believe torture can be poetic and artistic.

That’s the plotline, but I’m not going to recommend this for its plot. The merits of the book are in the author’s expertise. WORLD magazine editor Marvin Olasky has authored such nonfiction books as The Great Divide: The failure of Islam and the Triumph of the West and The Religions Next Door: What We Need To Know About Judaism, Hinduism, Buddhism, And Islam. So Scimitar’s Edge is a highly educational novel, giving readers an insightful look into the minds of Islamic terrorists.

However it is also Olasky’s first attempt at fiction, and while it is suspenseful, the dialogue can be clunky at times. From an entertainment perspective, or evaluated on its literary merit, this is an average book. But for those who like learning via a fictional format, this is a pretty accessible way to learn more about Islamic terrorism, and learn about it via the insights of a wise, knowledgable and trustworthy Christian author.

One caution: this is only intended for adults. Olasky details some of the terrorist’s torture, and while he treads quite tactfully, it could be too much for young readers.

You can buy a copy at Amazon.com

Posted by Jon Dykstra at 1:30 AM No comments: 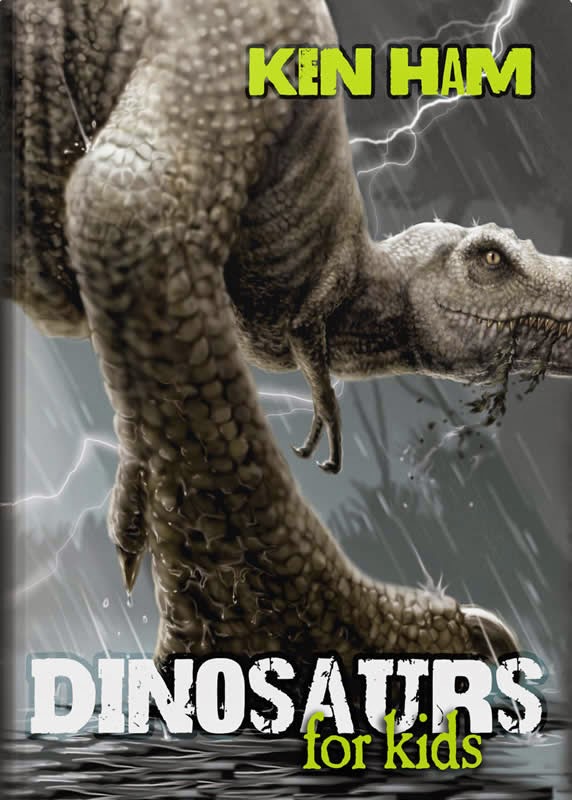 Ken Ham has crafted a great kids’ primer on the creationist perspective on dinosaurs, showing them how to understand the evidence. He begins by outlining the “seven ages” that apply to dinosaurs.
One caution is worth noting, particularly since this title is aimed at children as young as 9 (and up to about 13). It concludes with a very brief Gospel presentation and invitation to pray the sinner’s prayer, which could leave readers with the impression that this prayer is not simply the beginning of something, but the sum total of it.

The book’s strengths are it’s colorful full-page pictures (see below) and the gentle way it introduces children to evolutionary thought – we hear the evolutionist's theories, but they are presented with in a controlled manner with rebuttal on hand. 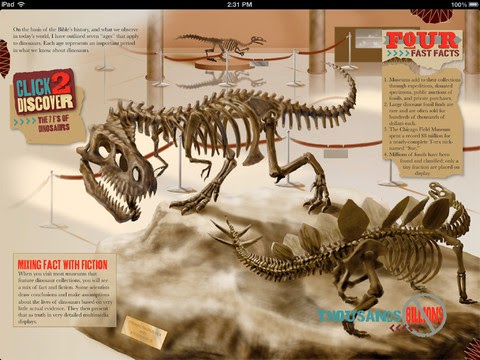 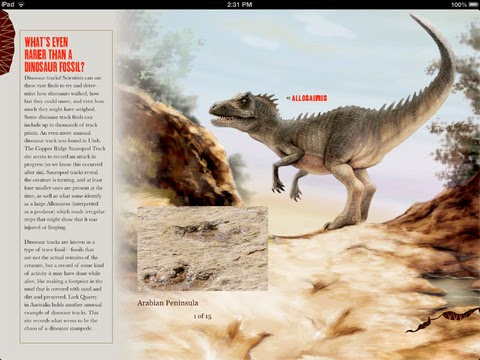 Of the various dinosaur books I've reviewed to this point I think this one might be the most attractive to the under 10 age group. It is certainly the most digestible, with each two page spread serving as a kind of mini-chapter or section. So kids can read a couple pages, and then be done for a bit. You can buy Dinosaurs for Kids here at Amazon.com

Adults will find it an interesting book too, but there are other dinosaur books – ones that demand a little more from a reader, and also reward the reader with more depth – that adults will like more. Check out these other possibilities.
Posted by Jon Dykstra at 12:30 AM No comments:

How to Alleviate Poverty Without Hurting the Poor... and Yourself
by Stephen Corbett and Brian Fikkert
2014 / 274 pages

This book was recommended by a member of the audience of a documentary called Poverty, Inc. The movie showed how the efforts of many organizations to help the poor in the Third World (more correctly called the Majority World in the film) often just make matters worse for them, often much worse. True enough, but then what should we do?

Poverty, Inc. - the film - was not clearly from a specifically Christian perspective, but When Helping Hurts consciously seeks to determine how to truly help the poor in the name of Christ. The first step is to understand that Christ came to earth not only to save people from their own sins - something Reformed people rightly stress - but also to restore the relationships of people - first of all, obviously, with God Himself, but also with themselves, with others, and with creation. Old Testament Israel was supposed to demonstrate the restoration of these relationships, but so often failed, again and again, making clear the need for Christ to take on the task Himself. One way Israel was commanded to be a light to the nations was in its treatment of the poor, and now the New Testament Israel - the church - is given the same task.

If we accept that helping the poor is a Biblical mandate (even if not the Great Commission itself), how can we do so without hurting the poor... and ourselves? To answer the question in reverse order, we hurt ourselves when we assume that we - the non-materially poor - are so much better than the materially poor, who often are much richer than we are in relationships with each other and with creation. The authors call this attitude of superiority to the materially poor a god-complex. To help the materially poor, we need instead to recognize where they can help themselves.

In that vein, the authors point us to helping the poor where they are seeking help, not where we (often mistakenly) think that they need help, and to help them by working with their strengths rather judging their weaknesses - something called Asset-Based Community Development. As far as I can see, these principles have been observed by such Reformed aid organizations as Word and Deed and Children of Light.

If there are some very good Reformed organizations helping the poor in the Majority World, what pitfalls can we avoid in that area, and how can we start helping more in our own cities and neighborhoods? The authors show how the poor often are able to manage their finances very well on their own, but that either some training or some small financial help can push the competent but struggling poor out of oppressive situations. They caution that short-term mission trips do not typically help the materially poor, but rather, out of (ironically) a poverty of knowledge and experience of those making the trip, actually hurt them. Finally, the authors tell us about "Getting Started on Helping Without Hurting" - the title of the last section.

Finally, let me address the issue of whether this focus on helping the poor is a distraction from the Great Commission. Historically, one of the things that set the church apart in the ancient Roman world was its willingness to help the sick and abandoned outcasts of society. That love for the neighbour has been a mark of the church ever since the ascension of Christ. Even now, Reformed churches are recognizing that reaching out to the poor is one way of bringing our congregations into contact with the people of their neighbourhoods.

If you think that this book will help you and your congregation alleviate poverty without hurting the poor... and yourself - and even of strengthening our evangelistic outreach, then you can buy it here.
Posted by Jeff Dykstra at 12:30 AM No comments:

How the Irish saved Civilization 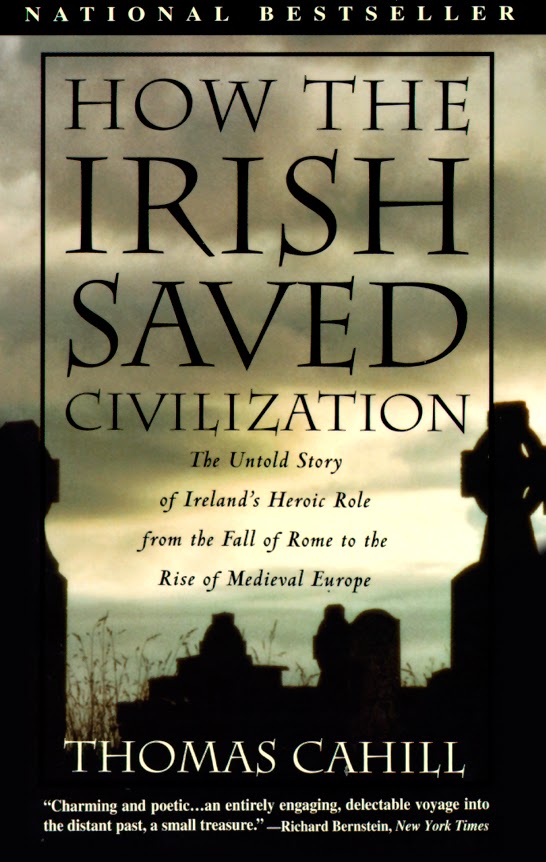 When I think of the Irish, what comes readily to mind are the Irish Rovers of traditional folk music fame, or Riverdance, the world-renowned tap-dance troupe, and of course, Saint Patrick who chased all the snakes out of Ireland. But in truth the latter would never have considered himself a “Saint,” nor is it probable that there were ever any snakes in Ireland for him to chase. But this Patrick did become a saint in the biblical sense and had a profound effect on the history of the church in Europe.

Patrick’s life story is only part, but a pivotal part, in the story of how the Irish saved civilization. After the fall of Rome until the time of Charlemagne, Europe entered a period known as the Dark Ages, a period during which culture, learning and scholarship disappeared; throughout Europe the barbarians looted artifacts and burned books, from the Greek and Roman classics to the Jewish and Christian classics.

But Patrick’s role in all this started when he, as a teenager, was kidnapped from Britain by the Irish, and suffered the next six years as a lonely shepherd-slave with only hunger and nakedness as his companions. In these impossible circumstances this young man, as he writes in his Confession of Saint Patrick, grew in faith and was roused by the Spirit. So much so that twenty-five years after his escape from this slavery, he returned to Ireland as a missionary. On his death almost thirty years later, pagan Ireland, once a shifting world of darkness, had become a Christian nation. And that is only the start of the story; his mission in Ireland eventually had many marvelous results including the preservation and transmission of classical literature and the evangelization of Europe. Read this book and see how the Lord worked in wondrous ways to bring His word to these ends of the world.

How this all came about is a story of adventure, drama, suspense, danger, hardship, cruelty, and courage. It is a book that you will probably read a second time. This book is recommended only for adult readers because history in our sinful world also brings many disturbing elements to our notice. Pagan practices, including sexual perversions, that are described may be troubling to some readers, but these accounts are also what makes this story all the more powerful. God molds Patrick, through his slavery and suffering, into an indestructible force to bring His Word to these Irish pagans with their detestable practices. And then He uses these once perverse people as His instruments to spread that message to Europe. As William Cowper wrote, “God moves in a mysterious way, His wonders to perform.”

You can buy it at Amazon.com by clicking here.

- Adolph Dykstra
Posted by Jon Dykstra at 9:40 AM No comments: