FISH OUT OF WATER: Surviving and thriving as a Christian on a secular campus 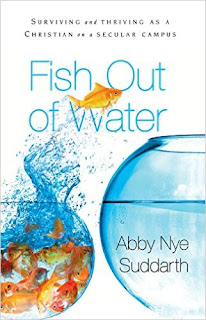 Parents might think they know what college will be like for their children, but as Abby Nye points out in this slim volume, in the last twenty years things have really changed. Nye wrote Fish out of Water, while in the third year of university, at the suggestion of her journalist parents. She was shocked, and overwhelmed by her first year on campus, but stuck it out, and started taking notes on the strange and perverse goings on at today’s secular campus.

It started with her Welcome Week orientation activities, which included a meet and greet where guys and girls who had just met were greeting each other with a French kiss. Throughout the year, the weirdness continued – some of the activities included “National Condom Day” followed shortly after by a “campus-sponsored activity called ‘Just How Kinky Are You?’” The campus “Counseling and Consultation Center” prepared for February by handing out a flyer title, “Road Trip?” which advised students to set up a “drinking plan” for Spring Break and gave tips on what to do if your drinking buddy was so drunk he stopped breathing.

But it isn’t just the weirdness that Nye addresses. She also tackles some of the day-to-day challenges Christians will face. She notes the hypocrisy many colleges have towards everything and anything, except Christianity, in a chapter titled, “We will not tolerate intolerance.” Her most helpful and practical advise can be found in the chapter “Pick your battles” where Nye shows how to stand up in a godly, respectful and effective way, and also shares thoughts on when it is probably best to just walk away instead.

While Nye probably isn’t Reformed, most of her advice is biblically sound. This is a great volume for parents and college-bound students to read. And, amazingly, the book can be read for free online at answersingenesis.org/articles/foow (just scroll down to see the chapter headings and click on each one). A paper copy can be had at Amazon.com here and Amazon.ca here. 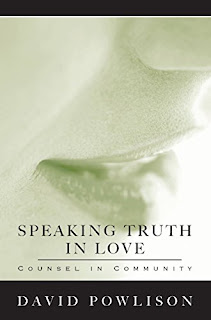 With more than half as many passages in the Scripture Index at the back as the book has pages, this is a book on counseling that is solidly grounded in the word of God. Powlison writes in the conviction that 'On the face of it, Scripture is about counseling' (page 175), both by pastors and by every member with the other members.
This is a book to help those in the church who must counsel - first of all pastors, then other officebearers, then congregation members. It is a book about opening ourselves up to the searching truth of God's word, first in our own lives and then in the lives of others. Powlison
A book that will instruct and challenge anyone who believes that God heals souls through His word.
Posted by Jeff Dykstra at 1:43 PM No comments:

Email ThisBlogThis!Share to TwitterShare to FacebookShare to Pinterest
Labels: books you can read in an evening or two, Christian non-fiction, counseling, David Powlison, non-fiction, theology

Now They Call Me Infidel 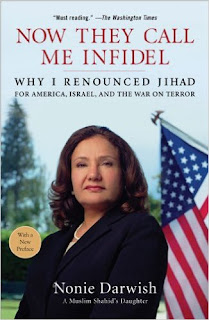 Nonie Darwish was born in Egypt, but moved to the Gaza Strip in the 1950s when she was just five years old. Her father was a military man, given the task of recruiting and training Palestinians to conduct guerrilla-style raids into Israel to kill and harm as many as they could. She was just eight when the Israelis assassinated her father with a letter bomb.

Her history would seem to make her an unlikely champion for Israel. But her father's death wasn't the only event to shape her life.

For example, early on she tells of how, when her mother discovered their new maid was pregnant, she turned the maid out of the house, lest anyone think that some male member of their household caused the pregnancy. It wouldn't have been unreasonable for people to have started talking - raping maids was hardly unheard of.

But Darwish's mother knew that there was a very real chance that if the maid was fired and sent back to her family, her family would kill her. This type of "honor killing" was also hardly unheard of - families would sometimes deal with the shame of a daughter being pregnant outside of marriage by murdering her. They thought this would somehow restore honor to the family.

So Darwish's mother instead sent the maid to a government facility that took in pregnant girls. Several months later her mother inquired after the girl. She was shocked to find out that the girl was dead. She was told: "Her family took care of her disgrace."

So this then is Islam, or more precisely the Middle Eastern Islamic culture, revealed in gory detail by someone who knows. She addresses some of the culture's biggest problems including:

Read more »
Posted by Jon Dykstra at 1:10 AM No comments:

Is Christianity Good for the World? 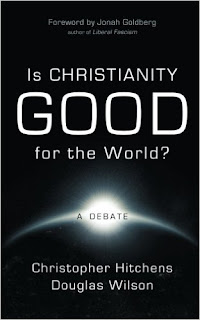 This slim volume pulls off the rare feat of appealing to both atheists and Christians. In 2007 the magazine Christianity Today asked one of the best known atheists of our day, Christopher Hitchens, and a comparatively unknown pastor named Douglas Wilson to discuss the question, “Is Christianity Good for the World?” The two went back and forth through six rounds, and the exchange was collected in this short, 67-page book. Most atheist reviewers are certain their man won the debate but, curiously, most Christian reviewers are just as confident that Wilson won the day… and in convincing fashion.

The crux of the debate comes down to morals. Hitchens argues that Christianity is evil because many of God’s commands, like the one to wipe out the Amalekites (Deut 25:19), are immoral orders. Wilson counters that Christianity is good because it is true, and then asks Hitchens how he has the gall to call anything evil. Wilson argues that Hitchens, in his attack on Christianity, has to borrow from it concepts like moral and immoral, right and wrong, because those concepts have no grounding in the atheistic worldview.

This is a feisty, educational exchange that will keep any reader engaged but because equal time is devoted to Hitchens’ attacks against God this is not a book for the undiscerning. Its size makes it a great gift, even to those are already overwhelmed with good reading material. I gave it to my dad, who I had stopped buying books for because he has already has a stack of books he hasn't yet gotten to. Why add another title to the bottom of the stack? But I knew Is Christianity Good's head-to-head debate format, and its small size would pique his interest. I was right - upon unwrapping, it was immediately moved to the top of his reading list, and he was done it in a night or two.

CONTENT: Renowned atheist Christopher Hitchens and Reformed pastor Douglas Wilson debate, through six back and forth rounds, whether Christianity is good for the world.

CAUTION: As half this book is by a self-described anti-theist, half the book contains material that Christians will find objectionable. So this is not a book for the undiscerning.

CONCLUSION: Christopher Hitchens’ anti-God rants are ably answered and countered by Wilson. This is a great introduction to the atheist/Christian debate - both edifying and entertaining. And Wilson gives a good demonstration (though not an explanation) of presuppositional apologetics. It is a book most will enjoy.