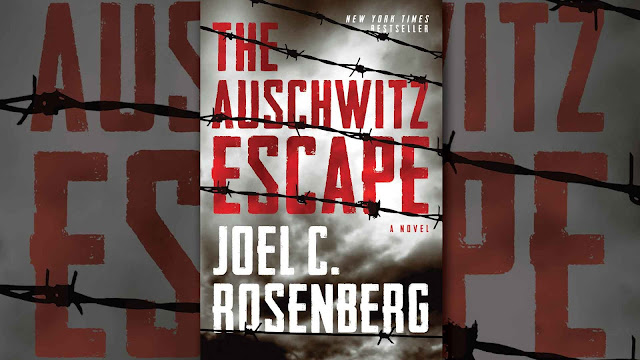 Joel Rosenberg is a fantastic writer, a New York Times best-seller, but his political thrillers are based in large part on premillennial views that I don't share, and that does take away from some of the fun. But in The Auschwitz Escape he's having a go at historical fiction, so his end-times eschatology doesn't factor in, even as his mad story-telling skills still do.

Jacob Weisz is a seventeen-year-old Jew in Germany in 1938. His parents are passive, hoping that if they just stay the course, eventually it will turn out alright. His uncle is a member of a Jewish resistance group that knows things will only get worse unless people start fighting to make it better. Jacob isn't as naive as his parents, but he does respect them. But when the Nazis come for his family, Jacob escapes and begins to fight alongside his uncle...for a time. As the title indicates, soon enough he gets caught and sent to Auschwitz. There he meets a Protestant pastor, imprisoned for helping Jews, and Jacob can't understand why the man was willing to risk his life when he could have stayed out of it and stayed safe. Jacob has a hard time trusting a man whose Christian motivations are so hard for him to understand.

Rosenberg makes clear that while the two principal characters are fiction, their experiences were not – he researched the actual escapes, as well as the escapees' attempts to let the world know what was going on in these death camps. That research, along with his impressive writing chops, give the book its authentic feel. And speaking of authenticity, Rosenberg has inserted a gospel presentation in the book, but his is more subtle and more natural than what most other Christian writers manage.

I really enjoyed it and am keeping it on my bookshelf because I can imagine reading it again in a few years. I'd recommend it for older teens and up.