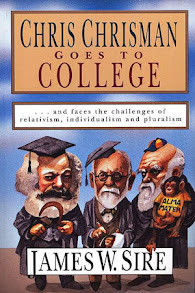 and faces the challenges of relativism, individualism, and pluralism

The clearest way to describe this book is as an apologetic novel - not one that apologizes for Christian faith, but one that puts forward arguments for not only Christianity, but for the engagement of Christians with society - as Chris Chrisman, a Christian, and Bob Wong, an atheist, have their world(view)s turned upside-down by the relativism of their university education.

Whether the name Wong is a sly shot at the wrongness of atheism is debatable, but the story is full of punny names. Chrisman and Wong share their search for intellectual clarity with their mutual friend, Bill Seipel, who is indeed a faithful disciple of Christ.

However, the novel is more than a set of Socratic dialogues (like the works of the Catholic philosopher Peter Kreeft, which are reviewed or previewed on this blog). A few additions make the story a potentially more compelling read. First, the story is told mostly through the eyes of Chris, including his concern for his roommate Bob, as well as his increasing interest in Susie Sylvan - but the book also glancingly brings in several other characters whose reaction to religious and social issues parallel both the current complexities of those issues and the different kinds of seed spread in the parable of the sower in Matthew 13:1-23. Second, the author James W. Sire alternates Chris's fictional story with chapters on the historical development of the worldviews facing the students at Hansom State University - individualism, pluralism, privatization, and varied types of relativism. In the process, Sire makes clear that Christians, no matter how sincere, often do not see the power of the kingdom of God to bring about not only individual salvation, but also the entrance of salt and light into our broken society.

The only problem is that Sire's concerns and suggested solutions tilt heavily in the direction of the quest for social justice, including his list of organizations that seek to bring Christian perspective to social issues - and of course, the list is out of date. As well, Sire describes the problem of individualism as extending even to significant denominational differences. For that reason, I suggest that the book is a good one to become acquainted with some of the challenges of campus life and instruction, but needs to be taken with a grain of salt regarding exactly how churches and Christians need to engage more fully with each other and our broken world.

Posted by Jeff Dykstra at 2:49 PM No comments: