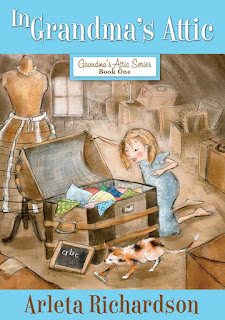 When Arleta was a little girl she would visit her grandma, where she’d play up in the attic. There Arleta would find old treasures that she’d bring to her grandma, who would share stories about them, and about when she was young.

The first story is about how Mabel (Grandma) and her friend Sarah-Jane got into trouble with hoop skirts. They wanted to wear the wiry hoops to make all their friends jealous of them, but they were not old enough yet. Then Sarah Jane finds out that her cousin, who can wear hoop skirts, has two old ones that she is going to give up.  Sarah-Jane’s mom says that they can wear them for play, but Sarah-Jane thinks it is a good opportunity to make a big entrance at church. And that Mabel can wear one of the hoop skirts too!

The one thing that they don’t know is how to sit down with hoops. When they walk down the aisle and sit in the front seat, the hoopskirts spring up, which made their dresses fling up onto their faces! That is super funny! This was embarrassing for the girls but they also learned a lesson, how pride can go before the fall.

All of the stories are funny and also teach the reader the lessons that the mischievous girls gained while growing up. This book is great for readers who are comfortable with reading chapter books. And if you like these stories there are three more books in the series.

– Sophia Dykstra
Posted by Jon Dykstra at 1:07 PM No comments:

The Soul of Science: Christian Faith and Natural Philosophy

I have reviewed another book in the Turning Points Christian Worldview series:  Reading Between the Lines: A Christian Guide to Literature. The series ended in the 1990s, but it has held up well since then. The book I am reviewing was the second-last book in the series. Because it surveys a broad swath of the history of science, Pearcey and Thaxton's analyis is still relevant.

Pearcey and Thaxton begin by demonstrating that far from being opposed by religion, has been founded on, especially, the Christian faith in the orderliness and rationality of the universe being guaranteed by the orderly, rational work of its Creator. The next chapter summarizes various approaches to the history of science - either judging early scientists by modern standards or recognizing their accomplishments in comparison to the knowledge and commonly held concepts they had in their own time.

Looking at "The First Scientific Revolution," Pearcey and Thaxton first show how various schools of philosophy would form the basis for later scientific endeavor - following the Aristotelian, neo-Platonic, and mechanistic. They stress that even classic Newtonian physics, which seems to treat the world as a vast clockwork, was not purely mechanistic. In the same way, biology was gripped by the tension between "romantic" biologists (inspired by neo-Platonism), and descriptive biology (inspired by Aristotles emphasis on function and purpose). Darwin later imposed a mechanistic frame of reference on biology in his rejection of purpose for life's functions.

Pearcey and Thaxton's discussion of mathematics discloses just how important the belief in the orderliness of creation was in inspiring the pursuit of mathematical knowledge, but how the lack of confidence in that orderliness (because of the rejection of God as the one who created that order) has led to a loss of confidence in mathematics in general. Along the way, they look at such fascinating concepts as non-Euclidean geometry, Godel's paradox, set theory, and exactly what truth means in mathematics.

Finally, the two authors' look at "The Second Scientific Revolution" looks at the mind-boggling insights and paradoxes of relativity, quantum physics, and the information revolution that links chemistry and biology. The last one is the most important, as it makes clear how God shows his presence in the ordered and irreducible complexity of life and its information content.
It is important to recognize that Pearcey and Thaxton are surveying the various religious foundations of science, not specifically justifying the Christian understanding of creation. Nor does the basis of our Christian faith, Jesus Christ Himself, form a part of their discussion; however, there is an extensive list of resources at the end for those who wish to pursue the subject further. For a more specifically Biblical look at science, check this review of The Divine Challenge: On Matter, Mind, Math, and Meaning.

If you would like to explore The Soul of Science, you can find it here, and here in Canada.
Posted by Jeff Dykstra at 4:30 AM No comments: 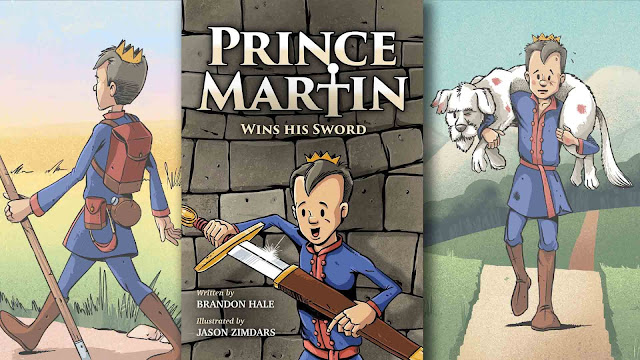 At bedtime, my dad reads a lot of books to us – me and my two sisters. One night he read a rhyming book called Prince Martin Wins His Sword, and we all liked it. Prince Martin is a boy who wants to prove to his father the king that he is brave, loyal, and true. So he decides to explore the unknown forest, and while he was there he found four evil hogs who were bullying a baby deer. And there was a dog there too, protecting the fawn. And the dog was a knight, named Sir Ray! Prince Martin was scared, but then he dove right in, fighting side by side with Sir Ray.


Should he help or go home, the boy had to decide.
And just how much help, could a mere kid provide?

It has lots of good pictures, but even without the pictures, the book is super good (I didn’t see the pictures the first time because I was in bed). Also, my little six-year-old sister doesn’t really like tension, and while this one was scary it wasn’t too scary.

I think this would be great for kids ages five through ten.