The Faithful Spy: Dietrich Bonhoeffer and the plot to kill Hitler 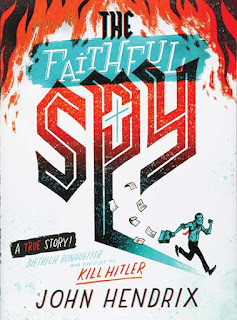 The world “pastor” is not often paired with words like “plot” or “kill.” But when the Nazis took over Germany, and used nationalism and intimidation to silence its churches, and then set out to conquer the world, Pastor Dietrich Bonhoeffer had to do something. And he felt himself pulled to do what would once have been unthinkable to him: Bonhoeffer joined a conspiracy to kill his country’s leader, Adolf Hitler.

At 176 pages, and text-dense, author John Hendrix has a lot of space to explore Bonhoeffer and his time. He starts with his birth and family life, before showing how World War I impacted the Bonhoeffers – one of Dietrich’s older brothers was killed – and how the runaway inflation that came shortly afterwards destroyed everyone’s savings. In 1921 a German could exchange 75 marks for 1 US dollar, but by the end of 1923 to get that same US dollar he would have to bring a wheelbarrow, or maybe a dumptruck, to carry the 4 billion marks that’d now be needed. Money, jobs, and hope were scarce, and this set the scene for the rise of Hitler. Germans wanted a way out, and Hitler presented himself as a savior.

Meanwhile, Bonhoeffer was learning, via travels in Europe and America, that a love for one’s country doesn’t mean you have to support everything your government does. So when the Nazis, only a few months after they came into power, fired Jews from any government positions, Bonhoeffer was one of the few church leaders to speak out. He published a public paper called “The Church and the Jewish Question” in which he laid out an explicitly Christian justification for resisting the government. He described three ways the Church can and should respond to an evil government.


As you can tell, this “comic book” gets into some big and heady topics. What’s more, “how to deal with a hostile State?” is a topic of growing relevance these days. That makes this an important book, but also one that should be discussed between parent and child. There is some serious theology here, and while the general thrust is right on – we owe our allegiance first and foremost to God, even if that means resisting the State – what exactly it looks to live that out, back then and today, is a topic too weighty for a teen to work out on their own.

This is a graphic novel worthy of both a teen and adult audience. The thought and research that’s has gone into it is evident throughout. Even the coloration of the book is fascinating, with Bonhoeffer consistently shown either in teal or with a teal background, the Nazis always highlighted with the use of red, and when death makes an appearance there is a predominance of black.

I’d recommend The Faithful Spy for any teen who has begun to think on big issues, and anyone interested working through what it means to live to God’s glory in tumultuous times. 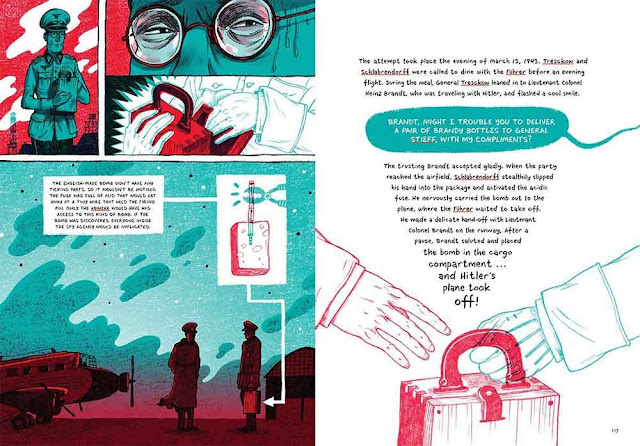 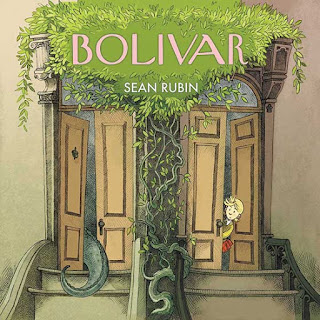 New York is the busiest city in the world, and people there are simply too busy to notice much of anything going on around them. Except Sybil. Sybil is a little girl who does notice things. And she recently noticed that her next-door neighbor is, in fact, a dinosaur.

Sybil keeps getting peeks at the mysterious, very large fellow next door. But try as she might, she can’t get the evidence she needs to prove his existence to anyone else. Her parents, her teacher, and her classmates all scoff. A dinosaur in New York? How ridiculous!

Now in a secular book that tackles dinosaurs, you might expect some sort of reference to evolution. But nope, there’s none of that. This utterly charming graphic novel is, in one sense, simply a chase story, with Sybil tracking her prey through New York boroughs, the museum, the subway system, never quite getting near enough for the perfect photograph. But the enormous size of this book – 1 foot by 1 foot, with 224 pages – also gives author and illustrator Sean Rubin an opportunity to show off a city he clearly loves….even as he gently mocks residents for their self-absorption.

With a girl and a dinosaur as the main characters, this is a fantastic book for boys and girls from Grade 1 on up (I loved it!).

This might also be the perfect book for a reluctant reader. The big bright pictures will draw them in, and the size of the book will give them a sense of accomplishment when they finish it, while the limited amount of text per page means this is a book they can finish.

Bolivar is a gorgeous goofy adventure and I can’t recommend it highly enough!

Posted by Jon Dykstra at 1:38 AM No comments: 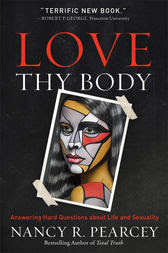 Nancy Pearcey's Love Thy Body is  such a really good read that I would like to put it as on option on my Grade 11 and 12 English classes's reading lists (more on that reading level later).

Pearcey's point is that much of our culture's (post-)modern morality results from a debased view of the body. Many people today live as if their actual physical body is not relevant to their personhood. This separation of personhood and body leads to problems in the following areas:
Pearcey shows the benefits of Christian understanding on all these issues, both in

Finally, Pearcey shows how we, as God's people, can help heal the modern disruption of the unity of body and person by showing the beauty of living life as God's children in both body and soul, and demonstrating our love for both body and soul with healing and hospitality for those wounded by the lies of our culture.

One caution: Because Pearcey deals with our society's response to the body, as well as the Biblical corrective to our culture's rejection of the body, the book deals with descriptions of, in particular, sexuality in the text and the notes that require mature reading to process, which is why I am planning to offer it as a reading choice only to Grade 11 and 12. However, for discerning readers willing to put in the extra effort or wanting to read the book alongside others, Pearcey's study guide and extensive notes will bolster the impact of the book in strengthening our understanding and the will to act out of that understanding.

If you believe that Pearcey will further your understanding of how a Christian worldview helps us to avoid and heal the personal and societal destruction that occurs that when you do not Love Thy Body, you can find it here, and here in Canada.
Posted by Jeff Dykstra at 3:30 AM No comments: 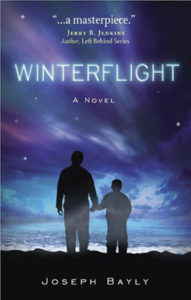 In this dystopian novel, Joseph Bayly takes us to a not-so-distant future in which abortion for disabled children is mandatory, euthanasia is compulsory soon after 75, and Christians are so confused about Romans 13 they think God wants them to submit to even these demands.

When Jonathan and Grace Stanton's six-year-old son Stephen falls off his bike, they don't know what to do. The fall was minor, but their son has hemophilia and he needs treatment.  However, by government law he shouldn't exist: had his condition been diagnosed prenatally the State would have required that he be aborted. Stephen survived only because he mother never visited a doctor during her pregnancy, and when the time came a friend helped her have a home birth. Now the Stantons wonder what the State might do, even six years later, if they bring their son in to see a doctor. Do they dare find out?

Winterflight was written almost 40 years ago, but it got my heart racing – it all seemed far too probable for my liking. Abortion is already being used to "cure" genetic disabilities like Down Syndrome and while it isn't mandatory, pressure from doctors and culture are such that in some countries 98% of Down Syndrome children are killed before birth.

When it comes to killing the elderly, we don't demand their deaths at 75, but we are already exploring the cost savings that can be had from their early departure. In countries where euthanasia has been legal longer, there are regular reports of involuntary killings. In Canada, attempts are already being made to make involvement on some level mandatory for all doctors.

But what hits closest to home is Bayly's portrayal of the confused Christian response to these government abuses. When Grace's elderly father is told he must report soon to be euthanized, their misunderstanding of Scripture has them thinking that they need to obey the governing authorities even in this, since those authorities are appointed by God (Romans 13:1). But at the same time, in saving their son, the Stantons show that on some level they do understand we must sometimes defy the State.

Is their confusion realistic? We'd never march ourselves off to the local euthanasia clinic just because the government demanded it. But why would we resist? Do we understand on what biblical basis we could reject such demands from the "governing authorities"? During World War II there was confusion on this point among some good Reformed Dutchmen. Among those who joined the Resistance, some felt guilty about it because they were worried that in acting against the Nazis they were resisting God's chosen rulers.

The confusion persists today. Even as we know the government shouldn't mandate euthanasia – even as we recognize that there are limits to their power – many Christians will still turn to the government asking it to solve our problems. We understand the government has limits, and yet we'll also ask them to do more and more. We are confused.

And that's why this book is well worth reading and discussing.

There are just a couple cautions to note. First, there is a small bit of language – I think "damn" might be used two or three times.

Second, without giving away the ending, when the book was first published some Christians misunderstood the ending as being prescriptive – they thought the actions of the book's confused Christians were what we should do. So it's important to understand that's not so. These are confused Christians, under enormous pressure, acting in a confused way and the author is not endorsing their actions. In fact, in many ways the book is about warning us not to do as they do.

This is a fantastic dystopian novel, as prophetic as they come, and certainly unlike any other Christian fiction you've read.

The topic matter is weighty, but because there's nothing graphic this could be appropriate for as young as early teens. However the younger a reader might be, the more they'll need a guide to steer their interaction with the story, and particularly the not-at-all happy ending. It would also make great book club material, with fodder for some fantastic discussions.
Posted by Jon Dykstra at 10:31 PM No comments: