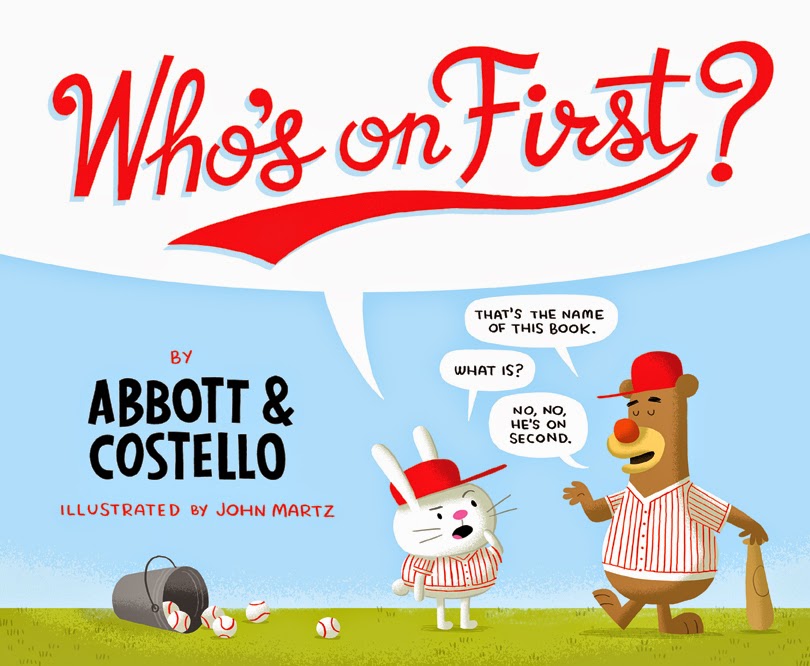 If you've ever seen the ol' Abbott and Costello "Who's on First" routine, then to "sell" this book to you all I need to share is that this is a faithful rendition. The comedians have taken the role of a bear and a rabbit, the colors are all bright and bold and the script is straight from the 60+ year old original.

If you've never heard the "Who's on First" routine, then a word of explanation might be due. In this comedic bit Costello asks Abbott about his baseball team. But poor Costello gets a mite confused because the baseball team has some unusual names. The first baseman, for example, has the name "Who." So when Costello wants to know "Who's on first?" the unsatisfactory answer he gets from Abbott is "Exactly." The gives you a taste of what this is all about. (I did my own homage to this routine when I had to create an illustration for an article about how only boys - not girls - have the Y chromosome).

I read this to my five year old and she got parts of it, but I would say this is probably best suited for the 7+ crowd. I was trying to think of any cautions I could add and the only think I could come up with is that there is a bit of yelling in the book so this might not be one to read to a rambunctious lad. It is a great fun book that is sure to get some giggles out of your little ones.

I'd recommend this as a great one to get from the library rather than own, since it is based on a joke, and jokes don't stand up to repeated reads quite like good stories do. But it is a very good joke and wonderfully executed, so if you do want to buy a copy you can get one at Amazon.com. 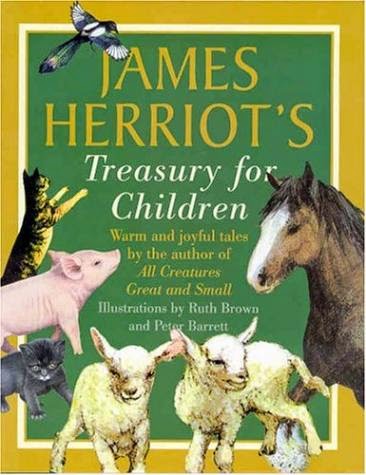 Author James Herriot is best known for a series of semi-autobiographical books he wrote about his veterinary practice in the Northern England country of Yorkshire during the 1930s through the 1950s. Early on it was a bit of a "fish out of water" sort of story, with the young inexperienced vet arriving in very rural setting and trying to make use of the latest techniques and practice with farmers who have been using the same time-tested methods for decades and even generations - sometimes the old ways were best, but sometimes they weren't, so the young James had to learn patience and humility and a bit of salesmanship. Some of the farmers and townsfolk were sullen or quiet, others outgoing and neighborly, but all of them strangely charming.

Sadly, the books also included frequent abuses of God's name, but it was wonderful to discover that the eight children's stories that Herriot wrote didn't have this problem. They too, are semi-autobiographical, and just as charming. All eight  are collected in this treasury, each one beautifully illustrated with full page pictures. I read this to my three year-old, who isn't much for longer stories like this (10+ minutes each), but the pictures kept her attention. And my five-year-old really enjoyed the story. While there are some quirky human characters, the animals are the stars, as is evidenced by the titles:
A couple of cautions: at one point in Moses the Kitten Herriot says, "What the devil...?", and in The Christmas Day Kitten, the momma cat dies soon after giving birth, which might be a bit traumatic for the very young. Oh, and if you are a tough macho dad who has never shed a tear in front of your kids, well, they'll see another side of you when you come to very beautiful ending of Bonny's Big Day.

I'd recommend these for three (so long as they can sit still) all the way up - I can't imagine any adults that wouldn't like these too.

You can buy a copy at Amazon.com by clicking here.
Posted by Jon Dykstra at 10:00 AM No comments:

Where Is God When It Hurts? 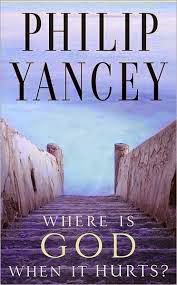 Starting with the big haunting question of the title, Philip Yancey's (updated) book takes us into the lives of a married couple, the Claxtons, coping with the wife's sudden onset of cancer, and reveals the conflicting and often useless (or downright painful) responses of many Christians. The question has many answers that demonstrates that God is there when it hurts, but not necessarily in the ways that we expect.

One answer is that pain itself is a gift of God, a sensory system that helps keep us safe. Its absence is the reason that, for instance, leprosy is so devastatingly damaging. Those who suffer from leprosy in the daily round of life do not  properly protect themselves from greater and greater injury and tissue breakdown until eventually they lose fingers, toes, hands, feet, facial features.... The hurt of pain saves us from the harm of serious and untreated injury.

Pain is also part of the general nervous system. Yancey notes that certain features of our lives involve a type of mild pain that is enjoyable by contrast with the rest of our situation at the time - spicy foods, that extremely hot water in the spa.... His speculation that perhaps that kind of pain will even persist in eternity is just that - speculation - but it is an idea that deserves meditation (even if maybe only to reject it). One of the features of the book that makes such thoughts a little easier to live with is the study guide at the end that invites members of book study groups to bring their reading into discussion.

The next major section of the book - "Is Pain a Message from God?" - invites us to consider the pain of our planet (think of the groaning of creation in Romans 8:18-23); the connection between pain and our own actions; the need to look forward rather than backward rather when we are in pain; and God's refusal to justify the existence of pain in our lives (using the example of both Job and Mary Verghese, a doctor whose own injury makes her more able to help others).

"How People Respond to Pain," the next section, deals with two contrasting ways that fellow Christians have dealt with a devastating fall; the ways that suffering have made various people stronger; and the responses of different people to not just pain, but the deliberate evil of the Holocaust - a chapter that  every Christian should read in a society that uses 9/11 as the latest reason to reject God.

All these ways of understanding pain may give us ways to understand and move forward with our own pain, but Yancey goes further in discussing how dealing with the "frontiers of recovery" - pain, helplessness, meaning, and hope - in both our own and others' pain. The final section of the book is both the most compelling and perhaps the 'iffiest,' with some ideas that challenge Christians in important ways, but may also provoke some strong disagreement. First, Yancey reminds us that God, as Chesterton put it, "played by His own rules." In Christ, He suffered the pains that we suffer and was forsaken as many feel now forsaken by God. This insight has a double edge, however, if the stress on Christ's suffering with us leads us to forget that He suffered for us.

This stress on God's suffering with us, incidentally, fits with Yancey's links to Open Theism, a current doctrinal error involving God not knowing any better what's coming up in our lives (as He supposedly allows us the freedom to determine the course of human events) than we do. This is why I would not recommend Yancey's other books.

Another misstep on Yancey's part involves his ideas inspired by the book of Hebrews that Jesus can sympathize with our weaknesses (He too had and has a nervous system that can feel the pain of life) and learned about our suffering by sharing it. This last thought is a little problematic, since Hebrews does not tell us Jesus learned about pain, but "learned obedience" - a difficult enough verse to interpret without dragging the nervous system into the question. Finally, Yancey's final quotation from Paul Brand - the doctor who spent years treating lepers - assumes that the body of Christ needs to "move on to a higher level of evolution" by becoming more sensitive to the pain of the members of the body. The exhortation is a good one, a necessary one, and one that is backed up by the rest of the book - but not by the theory of evolution - particularly in a book that ends with a glimpse at the decisive difference that eternity makes in confronting pain.

Besides these stumbles, the book deals compassionately with a difficult subject and invites us - and others studying the book with us - to pay it forward, showing that compassion to others suffering pain, in the name of Christ. If you want to buy this book, here's the link you need.
Posted by Jeff Dykstra at 12:30 AM No comments: 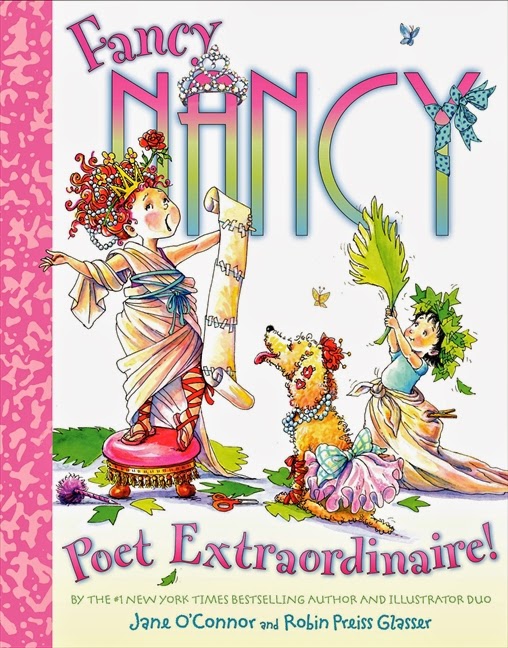 Fancy Nancy is an little girl who likes to dress fancy all of the time, and likes everything around her to be fancy too. As I don't really want my own girls to be girly in the "Oh, I broke a nail! Whatever shall I do?" sort of way, I'm not a huge fan of this series, but I also don't object when we check them out of the library. When we read them I just remind my girls that it can be fun to be fancy some of the time, especially when we go to church, but that we shouldn't get obsessed about how we look. Nancy is also pretty exuberant, which is something I want to encourage in my children, but there are moments where Nancy crosses over into "overly dramatic" which we will also point out to our girls. So that's a bit of a disclaimer for this recommendation: I love this title because it got my daughter trying to write poems – this can be a useful tool for parents trying to foster an appreciation for poetry in their children – but don't take this as an endorsement of the whole series.

Now the very best way to foster an appreciation for poetry is to read them good poems. But teaching them about the make-up of poetry is another good approach, and that's what this little book does. Fancy Nancy's class has set up a "poet-tree" where the children can put up their own poems. They've also been asked to canvass their friends and family to find out what their favorite poems are. We learn that nursery rhymes and song lyrics and limericks are all types of poetry.

Throughout the story Nancy is having some problems creating her own poem - she has a touch of writer's block - but it concludes with Nancy finally finding inspiration. She crafts an ode to her wonderful teacher.

Who would love this book? Girls anywhere from 5 to 10. My oldest daughter can't even write yet, but was inspired by this to create an acrostic poem of her own name (with a little help from her mom).

To get older girls, and boys too, interested in poetry, check out Love that Dog. It's a children's book intended for maybe 10 and up, but it got me, and a fellow adult poetry hater, to at least begin to appreciate poetry.

You can buy Fancy Nancy: Poet Extraordinaire at Amazon.com by clicking here.

Posted by Jon Dykstra at 2:00 AM No comments: