Nobody knows how to make a pizza 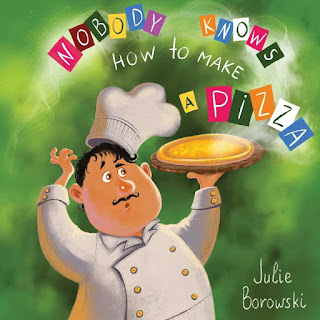 
The picture book’s title makes a claim that my daughter just couldn’t believe: “Come on Dad, you know how to make a pizza!”

But do I really? Sure, I know how to combine a pizza crust with cheese and tomato sauce. I’m even very good at it. But the point this slim volume is trying to make is that there is a lot more to it.

That flour I use started as grain that somebody had to grow, and I certainly don’t know how to do that. That farmer who does, brings in his crop using a wheat harvester, which he isn’t able to make himself. He’ll ship off his grain, perhaps via a train, which neither of us could ever manufacture. We also don’t know how to turn wheat into flour, and the folks that do, don’t know how to make the semi-trucks that ship their flour to grocery stores around the country. Making even the simple pizza crust requires a lot of different people all working together, with not one of them knowing how to get all the needed steps done. That’s why the pizza narrator’s claim – that “there’s not a single person on Earth who knows how to make me” – isn’t as outrageous as it first seem, And that doesn’t even get into the tomato sauce and cheese!

The point of this little book (and the 1958 essay, I, Pencil, which inspired it) is to expose the arrogance of any big government’s central planners. Whether it’s full-blown communists who want to plan everything, or a democracy where the elected leadership “merely” direct large chunks of the economy (gov’t spending in Canada accounts for 45% of GDP, and their impact is extended further still via regulations), we have governments of all sorts all around the world that think they know how best to run things from the top down. However, if planning the production of a single cheese pizza is beyond the capabilities of any one man, or even a team of the very smartest people on earth, then why would we think the government could ever know enough to competently make the innumerable management decisions they make, from what minimum wage everyone should be paid, to how children should be educated in K-12 (and what they should learn), which companies should be bailed out or subsidized, or even how much milk should be produced?

Of course, if no one knows how to make a pizza, that prompts an obvious question: how is it that countless cheese pizzas are made every day?

Instead of someone at the top planning it all out, this miracle occurs without much planning at all. The author of this picture book makes more of a libertarian presentation than a Christian one, so I’m using the term “miracle” here for a wonder she doesn’t really attempt to explain. But Christians do have an explanation. Now, we might take for granted what the free market can produce – cheaper computers, innovations like the smartphone, innumerable kinds of bagel – to the point it seems too ordinary to call all of that a miracle. But the free market is a miracle nonetheless, completely beyond anybody’s ability to plan and create, making it all the easier to see God’s fingerprints. His commandment “Do not steal” creates property rights, which is the basis for one person trading what they own to another for something they want more. If you can’t steal from others, then the only way to provide for yourself and your family is by producing something other people will value. You get money from them to meet your needs by making something that meets theirs. So God’s law is the basis for free trade and it is unplanned, unorganized free trade that has miraculously proven to be the most effective way of raising people out of poverty. The government still has a role here – to prevent theft, enforce contract laws, and generally ensure that property rights are respected – but not in picking the winners and losers.

While that’s deeper than this picture book goes, what Julie Borowski does highlight is the result: all sorts of strangers cooperating with one another, each looking out for their own interests, but together creating something that none of them could make on their own – innumerable voluntary exchanges and, eventually, violà a pizza!

As noted, this book has a libertarian flavoring to it, and because libertarians can often be libertines on moral issues, their values can be at odds with what God knows is best. However, in this case the libertarian impulse for small government syncs up well with the Christian emphasis on humility and Man’s fallibility – we have a hard enough time trying to plan out our own lives, so it’s arrogant indeed for bureaucrats and politicians to think they can plan out everyone else’s lives for them. Better then, to limit (though certainly not eliminate) the government and what it does, so as to leave people the responsibility and allow them the freedom to manage their own lives.

This would be read to best effect with a parent along for the ride. Otherwise I could see kids enjoying it, even as they entirely miss the overall small government argument being made.

You can watch the author read her book below. 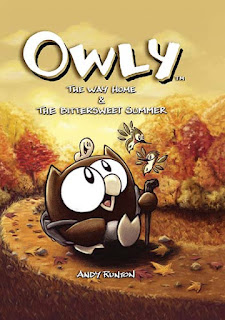 
This is two stories in one, and at about 80 pages each, they have room for some real fun. In the first, we get introduced to Owly, who, as you may have guessed, is an owl. The forest creatures are afraid of him because, well, he’s an owl, and they know that typically owls eat creatures like them. But not Owly. He’s a kinder gentler owl, and all he wants to do is feed his fellow birds seeds.

Sadly, no one trusts him, and Owly is all alone… until the night of the big storm! Then Owly finds a worm, half-drowned, and nurses it back to health. Worm, realizing he hadn’t been eaten, trusts and befriends Owly, which is the start of something beautiful. It’s never really explained what Owly does eat, but we can be certain that it isn’t cute little worms!

In the second story, Owly and Worm meet a couple of hummingbirds and have a great time until the little speedsters have to head south for the winter. But don’t worry, they’ll be back come Spring!

It’d be more accurate to call these “talkless” rather than “wordless” because, even as the dialogue between Owly and his worm friend is limited to symbols and punctuation marks – a question mark when one of them is puzzled and an exclamation mark when they are excited – there’s the occasional shop sign or even a whole encyclopedia page entry on hummingbirds that does require the reader to be able to actually read.

If you’re considering getting this for your school library, you’ll be interested to know there are two editions of this story, the first in black and white with this symbol-based dialogue, and the second, now titled simply Owly: The Way Home (2020) that is in full-color and adds in a minimal bit of verbiage between the characters. While I really like the original near-wordless version, it was sometimes a bit hard to decipher what Owly and his pal were saying to each other, so the second editions are probably the best way to go. Everything in this series seems to be gentle and kind including Just a Little Blue (1st edition 2005 /2nd edition 2020, 130 pages), Flying Lessons (2005/2021, 144 pages), A Time To Be Brave (2007/2022, 132 pages), and Tiny Tales (2008, 172 pages).

Posted by Jon Dykstra at 5:40 PM No comments: