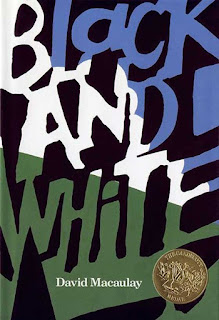 David Macaulay (1946-) is a children’s author who loves to investigate how things are made and how they work. He covers everything from architecture (skyscrapers, bridges, etc.) to machines (computers, inclined planes), and even biology (cells, the human body). Macaulay is first an artist and then an author, so even though he writes for all ages, his books are always picture books.

His first, Cathedral: the story of its construction (1973), set the template for much that would follow. It was filled with detailed, full-page illustrations showing the whole construction process, right from the decision to build in 1252, all the way to the church’s completion more than a hundred years later. It isn’t the history of any real, specific cathedral, so, to give added color, Macaulay included a fictitious backstory. While this narrative is interesting, it’s also quite bare-bones – we learn the architect’s name and hear about some of the monetary troubles involved in paying for the cathedral, but not much more than that. Most of the “story” details the construction challenges these ancient builders faced, and the ingenious solutions they came up with to solve them. Many people are mentioned, but the story is more a biography of the building than its creators. A combination of detailed text, and big pictures, gives Cathedral a cross-age appeal. Younger, elementary-aged children can flip through it (maybe with some help from mom or dad), while teens and adults will likely read it front to back.

Cathedral was followed by others of a similar sort, exploring how pyramids, jet planes, inclined planes, and even toilets work. Then, in more recent years, Macaulay has delved into the way our bodies work.

So what Macaulay books would be great to check out of your local library? Or might be good purchases for your home or Christian school library? The following list isn’t exhaustive – Macaulay’s output is impressive, so I haven’t gotten to them all yet – but what follows are my recommendations, grouped by age group.

While many Macaulay books are oversized, these are more typically sized, just right for the younger reader to hold and flip through. But mom and dad will also enjoy reading these to their kidlets.

Toilet: How it works 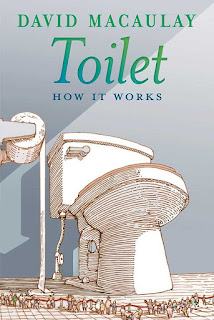 32 pages / 2013
A great one to start boys on. Considering the topic matter, it is quite remarkable that this is free of any potty humor.


Castle: How it works
32 pages / 2012
A much simpler version of his earlier Castle (1977) book, it might create interest in that bigger volume.


Shortcut
64 pages / 1995
This is a creative mesh of several seemingly unrelated storylines, and the fun for kids is to figure out how they are all interconnected. This brightly colored picture book is a departure from any other Macaulay book, being more a mystery than anything architectural.


Black and White
32 pages / 1990
A Caldecott winner, this unique book has 4 stories being told simultaneously on each two-page spread. Or is it all just one story? Very fun, but not for the impatient, as the answer reveals itself slowly.

These architectural books are all big, but not too big to scare away the elementary reader. I’ve grouped them in order of preference, leading with the very best. But if a child loves any one of these, they’ll likely enjoy them all. 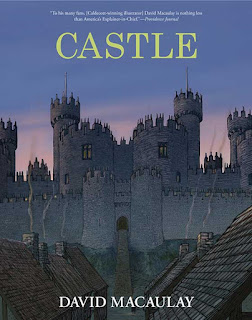 80 pages / 1977/2010
A Caldecott Award winner, it tells the detailed, historically-accurate (though fictitious) story of how an English castle was constructed in the late 1200s. Be sure to get the 2010 version, which has all the full-page pictures in full color. Castles are the coolest, so if you were to get just one Macaulay book, this should be it. It won a Caldecott award.

Cathedral
80 pagers / 1973/2013
The one that started it all. Its oversized pages showcase in words and wonderful, detailed pictures how a medieval people, lacking all our modern construction tools, could build something that would marvel us still today. The black and white original was redone in color in 2013, and the added vibrancy is wonderful.

UnBuilding
80 pages / 1980
A fictional, fantastically illustrated story of how a rich Arab prince buys the Empire State Building to move it to his home country. It is a floor by floor account of how something this big would be “unbuilt.”

City
112 pages / 1974
Describes how the Roman Empire would plan and build their cities.

Pyramid
80 pages / 1975
As you might imagine, there is some mention made about the ancient Egyptians’ pagan beliefs, but nothing that the target audience, Grade 3 and up, shouldn’t be able to see through. But they might not realize that Macaulay is including some guesswork in amongst the facts since there are a few theories about how exactly the pyramids were made. 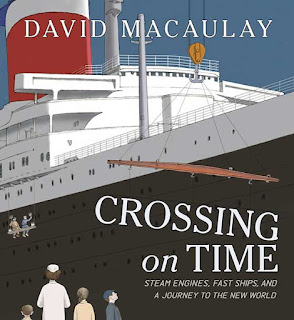 Building Big
192 pages / 2000
This might be my favorite of all Macaulay’s books, with short treatments of various historic bridges, tunnels, dams, domes, and skyscrapers. More than 30 structures are covered, going as far back as the Pantheon, all the way to today’s skyscrapers. It’s a treat to see just how creative engineers have been in building bigger, higher, and deeper, even as they used less and cheaper materials. I’ll own up to not understanding even half of what Macaulay explains, but that didn’t detract from the enjoyment.

Crossing on Time
128 pages / 2019
This is part autobiography, sharing the author’s trip across the Atlantic Ocean when he was only a young boy and his family immigrated from Great Britain to America. But it is, even more, a story about the development of the steam engine, passenger ships in general, and the SS United States specifically. As always, detailed pictures provide lots for the viewer to explore.

TAKE IT OR LEAVE IT

Mosque
Another big book about how a building gets built, and while there is no real reason to avoid it – it treats Islam with deference, but doesn’t actually promote it, as this is about a building rather than the religion – there is also no pressing reason to get it either. I know it wouldn’t have interested me as a boy, especially when compared to his book on castles.
The Way We Work
In this enormous tome (300+ pages), Macaulay explores how amazingly well-designed we are (though he doesn’t put it quite like that). He details it from the atomic level on up to cells, eyes, and even our reproduction system. It is the brief section on sex that makes this a take-it-or-leave-it book. It is quite restrained and comparatively tame to what else is out there, but this isn’t a topic that kids should tackle without adult supervision, making this a questionable book for a school library. And while parents could conceivably use it to introduce and discuss this topic with their kids, there are better, specifically Christian, books available. So I’d only recommend this for an age group who already knows the basics about sex since for them this could be a fascinating overview of the whole body (and the sex section isn’t remotely titillating). I’ll also note the passing mention made, 2 or 3 times, of ancient ancestors or of evolution. However, the more important worldview implication is the glaring omission of any mention of God, even as His handiwork is explored and praised. The creation is praised rather than the Creator, and kids may miss the significance of that misdirection, so parents will need to make that plain.

The Way Things Work Now
Macaulay uses cute mammoths to explain everything from how basic machines like screws and inclined planes work, to the inner workings of computers and jets. There is the very occasional mention of millions of years, and, on a few pages, some tiny angel-like creatures appear to help illustrate how a machine works. It’s a mystery why he uses them there instead of the mammoths that are everywhere else.

Mammoth Science
Mammoths are used to illustrate and introduce scientific topics as varied as light, molecules, density, bacteria, pressure, hydraulics, and magnetism. But evolution is a minor theme, popping up at least a half dozen times, including a couple of pages devoted specifically to it.

Angelo
This is the story of Angelo, who cleans and restores ancient architecture, and the pigeon he saves. It is a charming and different perspective on these ancient buildings, but Angelo dies at the end and that made my girls cry. So, at least in our house, two thumbs down.

Baaa
Strange dystopian picture book in which humans have disappeared due to overpopulation, and then sheep follow in their footsteps. A Malthusian/overpopulation allegory. Simply nonsense.

Underground
This is not a bad book, but it isn’t a good one. It details what is found underneath a downtown city street, but the book is dry and dusty because there is no story element.
Great Moments in Architecture
This is an attempt at humor, with various strange works of impossible, fanciful architecture shown, but it ends up being odd and weird, not funny.

While this review is about Macaulay’s books, I’ll briefly mention a video series based on one of them. The Way Things Work is 26-episodes long and utterly fantastic, and while the $200+ price tag is too expensive for parents to buy, many public libraries carry it. To learn more, see my review here.

There aren’t many worldview conflicts to be found. It comes out that Macaulay does think people are really something, which, of course, we do too, though likely for a different reason. We know our worth comes from outside ourselves – it comes from being made in the very Image of God (Gen. 1:26-27) – whereas Macaulay seems to believe that what makes us special comes from what we can do. In the preface to his updated Cathedral (2013), he writes:

“Whatever magical or superhuman notions these buildings may stir, castles and cathedrals are tangible reminders of human potential. Understanding how they came to be is just the first step in recognizing that potential in each of us.”

If you were to ask, “Who or what is the ‘god’ of Macaulay’s books? Who or what is the object of worship?” this would be the answer: human ability and human potential. In the same book, he also offers a seemingly cynical take on medieval Christianity:

“For hundreds of years the people were taught by the church that God was the most important force in their lives. If they prospered, they thanked God for his kindness. If they suffered, they begged for God’s mercy, for surely He was punishing them.”

Of course, as children of the Reformation, we know there was a good deal about the medieval Church to be cynical about, so maybe there is no fault to find here.

A clearer problem lies in the one or two dozen mentions Macaulay makes about evolution and millions of years. But these mentions are spread out over his many books, such that in a book of 300+ pages it might happen twice or thrice, and in his shorter books, not at all.
The most overt worldview conflict I’ve found is in his strange dystopian Baaa (1985), in which humans have overpopulated themselves out of existence, only to have sheep take their place and then repeat their mistake. The overpopulation lesson preached here is in opposition to God’s command to be fruitful and multiply (Gen. 1:28).

If you have a budding engineer in your family, they’ll love David Macaulay. He has books for all ages, and sometimes two books on the same subject, with one for a younger age group and the other for a couple or so years older. Because so many of these books are about engineering marvels, they might be categorized as “boy books” but my girls were interested too. I think they could also be a way to hook a reluctant reader into working through a very big book – they might open the book for the illustrations, but then curiosity will get them to start reading this page and that.

There’s certainly good reason that David Macaulay remains a favorite of so many, even 50 years after his first book!