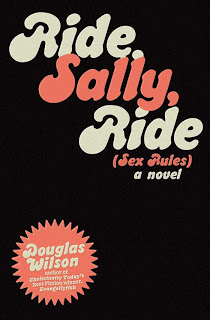 This might be the weirdest bit of fiction I've read, but the author's point is that this is no stranger than the bizarre non-fiction showing up in our news feed each day. One of the "characters" in the story is a life-sized sex doll, and that had some thinking that this was one of those books. It is not. It is, instead, a comic and admittedly PG-rated commentary on the gonzo culture that produces such things.

The setting is the US of twenty years hence. A Supreme Court ruling overturning Roe vs. Wade has the interior states banning abortion once again and has Americans en masse  "reshuffling to states more conducive to their values." With Christians heading inland and liberals fleeing to the coasts, the country's outer edges have doubled down on sexual license and given the biggest of bear hugs to Big Brother, even as the heartlands are taking a sharp Godward turn and paring down the size of their governments. Our hero, Ace, lives in Colorado, one of the few inland woke states, where speech is monitored, and the orthodox Christian books are available only on the dark web. Christians are still allowed to circulate, but like the frog being brought to a slow boil, most are unaware of the decided change their innards are undergoing.

The story begins with Ace's father Benson making the welcome wagon ready for a new neighbor who is just moving in. Cookies are baked, and Ace and Benson head on over to help bring in the heavy furniture, because that's what good Christians should do. But what should good Christians do when your new neighbor introduces you to his life-size robotic "wife"? Father Benson thinks he should invite "them" over for dinner because, after all, "they" need Jesus. Son Ace grants the point that someone sure needs Jesus, but wants to know why his dad keeps talking about them.

One thing leads to another – we're still in the first chapter here – and Ace ends up trash compacting his neighbor's doll, and instead of getting charged with destruction of property, the woke prosecutor charges him with murder, because their neighbor had clearly identified the doll as his wife.

It only gets crazier from there, and in a far too believable way.

If it hasn't been made clear already, this is not your typical Christian novel. For instance, while many a Christian novel will take God's name in vain, this one doesn't. And while no Christian novel ever uses the word "pussy" this one does, twice, used by a non-Christian character who, in her defense, uses it as appropriately as it might ever be used.

But that's about as problematic as it gets. While this certainly isn't a book for children, and despite its provocative premise, there's nothing titillating. This is a satiric commentary on our culture's dark turn, but that darkness is handled with delicacy.

Ride Sally, Ride is, at regular intervals, laugh out loud funny, and had me reading it to my wife to share the best bits. I'd recommend it for adults who appreciate satire, and while it isn't strictly dystopian (what with its happy ending) fans of that genre are sure to enjoy it too. The best test to see if you'll appreciate the book might be to see if you appreciate the trailer below. If it's too shocking, then Ride Sally, Ride won't be your cup of tea either.

But if you laughed...

Posted by Jon Dykstra at 3:00 AM No comments: 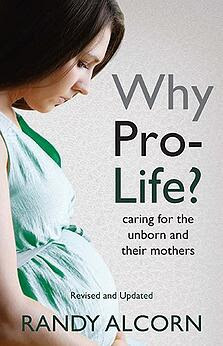 Randy Alcorn has written a much longer pro-life book called Pro-Life Answers to Pro-Choice Arguments, but while I would recommend it highly as a pro-life reference work, at 455 pages, it's a bit much to take in in a short period.

Why Pro-Life?, on the other hand, is an excellent concise call to love both mother and child in a crisis pregnancy. Randy Alcorn's book was originally published in 2004 (available as a free PDF at the last link below), but it was updated in 2012. Both editions include sections on the following:

The 2012 edition updates every chapter and adds the following:
Both Pro-Life Answers to Pro-Choice Arguments and Why Pro-Life? are typically insightful looks at an important issue from Randy Alcorn, but the latter will be invaluable for both those skeptical of the pro-life position and those who are new to the pro-life movement.

If you want a clearer understanding of how to be pro-life for both mother and child, or want to expose someone else to the pro-life perspective, you can get the 2004 version of Why Pro-Life? for free here or buy the 2012 edition on Amazon.