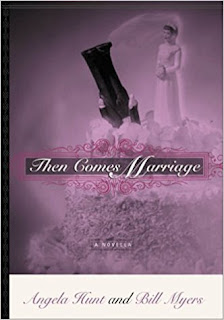 This is a great book. It’s funny and serious, goofy and intellectual all at the same time.

Then Comes Marriage is the story of Heather and Kurt Stone as they celebrate their first anniversary. While Heather and Kurt are madly in love, you’ve likely never met two more clueless individuals. As an anniversary present he gives her a four-wheel drive truck, and she gives him a collage of photos and ticket stubs from the months of their courtship. What neither seems to understand is that the present they give the other person is really what they wanted themselves.

Fireworks result, and this short novel or “novella” is spent sorting out the mess, and trying to figure out just what it is that God wants Heather and Kurt to bring to their marriage.

The story is definitely funny, and it makes some wonderfully serious points in a light-hearted way. It’s rarely preachy yet manages to provoke thought. This would be a wonderful book to stir discussion in a marriage preparation course or perhaps in a high school life skills course. Of course, it’s also great to read just because you want to dig into a good book.

The only real problem I had with the book is the price. At nearly $20 Canadian new, it’s a lot of money for such a tiny book. On the bright side, the book comes very solidly bound in a nice hardcover edition. And there are lots of used copies going for just a few bucks.

You can buy a copy at Amazon.com here and Amazon.ca here.

Reviewed by James Dykstra
Posted by Jon Dykstra at 4:00 AM No comments:

Dai Hankey has a great voice, and has paired up with a fantastic illustrator for his three books about Eric, and how this little fellow learns to say thanks, please, and sorry. Usually an author's voice isn't all that relevant, but in the three videos below we get to listen in as he reads his books (which can all be found at Amazon.com or Amazon.ca). Fun stuff!

In Eric Says Thanks this little boy models some fantastic enthusiasm as he learns Who to give credit to for the goodness he's been giving in his "brecky."

When Eric messes up he tries all sorts of way to get out of trouble, but lying, shifting blame, and coming up with excuses don't get him anywhere. But when his dad gives him grace - epic grace! - and pays for the broken pot, Eric gets a glimpse at the grace God gives us. We can't earn forgiveness. But we can ask for it.

Parents with highly developed "arminian sniff detectors" might detect a hint of this theology in the author's commentary after the book concludes. But if it's there (and I don't know if it is) it certainly isn't anything that children will notice or be impacted by. And, more to the point, it doesn't come up in the book.

Eric wants to show he can do it all himself, but the little fellow soon learns that pride goeth before a fall...right out of a tree!  When Eric finally realizes he can't do it on his own, his grandfather points Eric to Who he can go to, to ask for help.

Posted by Jon Dykstra at 2:18 PM No comments: 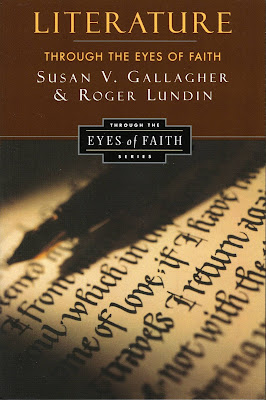