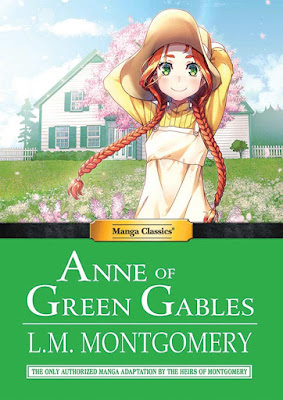 Anne is an orphan girl living in the Prince Edward Island of the 1870s, sent by mistake to the home of an aged brother and sister who need help with the farm work. The mistake is, they asked for a boy. Instead, they got the imaginative, effusive, emotional, red-head Anne. And once they meet, they can't let her go.

While Lucy Maud Montgomery was a Canadian author, and Anne of Green Gables (first published in 1908) a very Canadian story, it's always been incredibly popular in Japan too. So it makes sense that her story would be given a manga treatment. Thankfully, the adaptation is faithfully done, and at 300 pages, given the space it needs to tell the story well - only a very few scenes are given an abridged treatment.

If you're unfamiliar with manga, the style does take some getting used to, in the first place because the Japanese read right to left. That means what would be the back of the book to us, is the front of the book to them. Even though this is in English, it's still formated in that "reverse" style. Another feature that will strike readers as unusual is the way manga will sometimes depart from a semi-realistic style of drawing to something much more cartoonish, and then go back to realistic all in the space of a few frames, or even in the same frame. So, for example, while Anne's strict and controlled adoptive "mother" Marilla is depicted with realistic eyes, the emotional Anne has eyes in all sorts of styles. Most often they are doe-sized, but when she is angry or perturbed, they become big black dots, and sometimes she is drawn with no eyes at all.

If that strikes you as very strange, just consider how a Western reader will know that a lightbulb over a character's head means they have an idea. That's a bit of cartoon "emoticon shorthand" to let readers know something without spending a lot of words on it. Manga has its own, different cartoon emoticons, and they do need to be learned. But just like the lightbulb, they aren't hard to figure out. 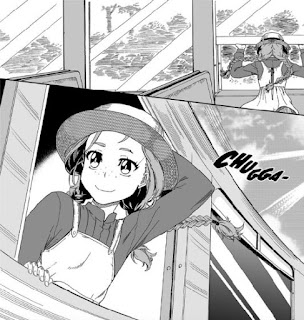 Cautions here are only the same ones that we'd have for the original source material. At one point Anne is being taught how to pray, and her first prayer, while not exactly disrespectful, certainly isn't what it should be. But the point is, she doesn't know how to talk to God, and still has to be taught, so I don't think this should be much of a concern. Then there's also Anne's stubbornness. When a classmate, Gilbert Blythe, calls her "Carrots," Anne breaks her chalk slate over his head. You'd think that would make them even (or put Anne in need of apologizing to him) but Anne resolves to never speak to Gilbert again. And she keeps to that pledge for years! The book shows this to be ridiculous, and I only mention it here because this comic format makes Anne accessible to a younger audience that may need a little parental guidance to recognize just how bad Anne's stubbornness really is.

Finally, in an afterword to the story, the adapter Crystal Chan notes that she is a feminist who "loves the elements of feminism in Anne of Green Gables." "Feminist" is sometimes synonymous with supporting "a woman's right to choose" so that might have parents concerned about whether this ideology is hidden within. But there is no need for worry: whatever sort of feminist the adapter might be, she has stuck closely to the original 100-year-old material (unlike the recent Netflix adaptation).

This is a fantastic, faithful, adaptation of a great book. Teens should skip straight to the original, but for younger readers, or the reluctant sort, this will be a great way to introduce them to this dynamic lass.

If you do intend to get a copy, be sure you get the "Manga Classic" version, as there is another comic, that one by C.W. Cooke and Tidalwave Productions, that only tells part of the story, ending abruptly and with no conclusion coming. I've included its cover image to the right here, to make it easier to identify what not to get. Don't accidentally get that one while you're searching for this manga adaptation.

Posted by Jon Dykstra at 6:02 PM No comments: 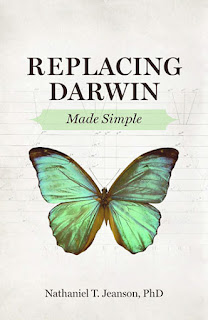 85 pages / 2019
How's this for an intriguing thesis for a creationist book: Darwin got it right.
What exactly is the "it" Darwin got right? Author Dr. Nathaniel Jeanson argues that in On the Origin of Species Darwin's scientific argument/approach did successfully poke holes in creationism...but the 1859 version, which held that all the species were created exactly as they are, remaining unchanged.
This "fixity of the species" isn't found in the Bible. God tells us He created "kinds" (Gen. 1:11, 21, 24, etc.) but why would we assume that has to mean species? We never see horses becoming deer, but we do see them becoming a whole host of different sorts of horses. So, might the "kinds" God created encompass larger groupings? We know, for example, that horses can breed with zebras. Might they belong together in the same "kind"? As Jeanson explains, this is how Noah could fit the animals on the ark: he didn't have to take horses, zebras, and donkeys, but instead took a representative pair of horse kind, from which these threes species eventually descended. And the same for dogs, and cats, and more.
The author not only gives Darwin credit for highlighting the problems with a "fixity of species," he wants today's scientists to question like Darwin. Jeanson argues that if they used this same scientific critical approach it would back today's creationism and tear down today's evolution. Then scientists would find creationism has explanations for some of the same observations evolution is said to explain. And they would also find that evolution has problems that creationism does not when it comes to sexual procreation, rapid speciation, mitochondrial "clocks," and more.
Made Simple is actually a simplified version of Jeanson's 2017 Replacing Darwin: The New Origin of Species, which clocks in at 335 pages. The larger version is written for the skeptic, something you can give to a curious friend, and it is larger because skeptics have lots of questions – it is a thorough overview of the creation vs. evolution debate. And that's also why it is the much more technical of the two. Both do require effort, but Made Simpler is probably accessible to anyone who had some high school science and is interested enough to put in the effort – the author describes it as the "Cliff Notes" version. Parts of the larger original are probably at a university level, but don't let that dissuade you if the topic is of interest – you don't need to (and I didn't) understand every last little bit to find it fascinating.
So pick up a copy of Replacing Darwin Made Simple to get a good overview of a compelling argument: Darwin rebutted 1859 creationism, but would also do damage to modern-day evolution. And if you want to dig deeper (or have a skeptical friend) then pick up Replacing Darwin: The New Origin of Species.
You can also listen to Dr. Jeanson give a presentation on the same subject matter in the 1-hour lecture below.
Posted by Jon Dykstra at 4:00 AM No comments: 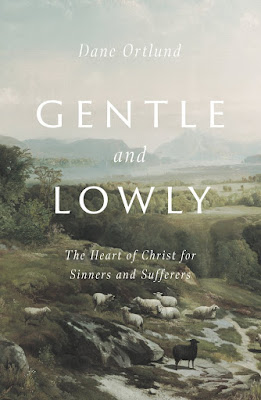 Note the subtitle. If Dane Ortlund has a mission for this book, it must be, at least partly, to show us that Christ loves His people, not only in spite of their sin, but even especially in their sin - not because He tolerates sin, but because sinners are sufferers. And how do we know that He loves sufferers?

Because He tells us. He tells us that His heart is "gentle and lowly" - that He yearns to extend His love to us. Dane Ortlund reveals how the Puritans loved to "wring out" the understanding of Christ's love for us, and in surveying their work, he also soaks us in the knowledge of how much God loves His people to come to Him for help and forgiveness. Ortlund excerpts the work of John Bunyan (the author of The Pilgrim's Progress reviewed here in this blog) and others in looking at verses from both Old and New Testaments that show how God yearns for His suffering (and even sinning) people:

These are only three highlights of the book's 23 chapters looking at the "gentle and lowly" heart of Jesus Christ, and the corresponding love for suffering sinners from God the Father and God Holy Spirit.
If you want to understand the gentle and lowly heart of our Saviour better (including being guided in your devotions by the Scripture index), you can find Ortlund's book here, and here in Canada.
Posted by Jeff Dykstra at 2:30 AM 1 comment: 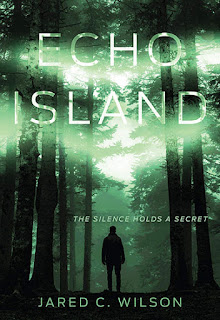 251 pages / 2020
After celebrating their high school graduation with one last group camping trip, four friends return home to find the streets empty. The same is true of the sidewalks, the stores, and all of their homes – everyone is gone, and there's no sign of where they went, or what made them go. Bradley, Jason, Archer, and Tim have the whole town to themselves and they can go wherever they want and take whatever they want. But what they want is to solve the mystery in front of them. Of course, this isn't something they can just Google...even if their phones did work. So how are they going to find answers? And maybe the more important question is, are they really alone?
I didn't know what I was getting myself into when I started Echo Island. The publisher has this in "Survival stories" and  "Action & Adventure" categories, and that sure doesn't capture it.  "Mystery" or "Christian allegory" are getting closer, but this one is hard to nail down. Is "Twilight Zone" a fiction genre? Maybe it isn't that the book defies description, but more that any proper description would have to include spoilers.
So I'm going to leave the description there and move on to who would like Echo Island. Author Jared Wilson said he was writing for teens who liked C.S. Lewis's Narnia series or his Space Trilogy. That's helpful, but I'll add that a 12-year-old who's only just figured out Aslan is a Christ-figure is going to find this frustratingly mysterious, whereas a 16-year old who has been chowing down on The Screwtape Letters, The Great Divorce, and The Hideous Strength will find it intriguingly so.
So get it for your older avid-reading teen, and then be sure to borrow it yourself.
Posted by Jon Dykstra at 4:00 AM No comments: