It's always fun to find a children's book that is interesting enough for parents to read a few times without getting too bored. And it is an absolute treasure when you can find an entire series of such books! Cynthia Rylant's Mr. Putter and Tabby books - 22 in all, so far - are exactly these sort of books.

Mr. Putter is an older retired man, with an older quite sedentary cat named Tabby. And next door they have a wonderful neighbor, Mrs. Teaberry, who has a good dog named Zeke. The go on the sort of adventures that older people do – a boat ride, a cooking class, painting the porch – and their two pets help liven things up too. These are quiet, sweet stories that will have you and your child smiling throughout.

My wife has also enjoyed reading them to our three-year-old, and was only disappointed with one of them when I told her it was the one "where Mr. Putter and Mrs. Teaberry finally get married." She was very sad to discover I was just joking - this perfect couple hasn't yet become an official couple. We are still hoping though!

I would recommend these for the 3-9 age group - great books for parents to read to older children, and fun books for children just learning to read to tackle for themselves.

Below I've included short reviews of the first 20 titles that we've read. I would highly recommend the series, with the exception, perhaps, of Mr. Putter and Tabby Take the Train, which has this elderly couple flouting a rule – not the best example, particularly in a book for young children. But that is the exception to a series full of charm and warmth.

Mr. Putter and Tabby Pour the Tea
Mr. Putter has some wonderful English muffins he would love to share, but no one to share them with. And when he goes to the pet store looking for a cat, all he finds are kittens, far too full of energy. But when he visits the animal shelter Mr. Putter finds a cat who's certainly not overly energetic. Tabby's joints creak, his hair is thinning and she seems a bit deaf in one ear... just like Mr. Putter! It is a wonderful match!

Mr. Putter and Tabby Walk the Dog
When Mrs. Teaberry slips on a kiwi (the fruit, not the bird) and twists her ankle, soft-hearted Mr. Putter quickly volunteers to walk her dog Zeke. But Zeke is no model dog - for Mr. Putter he is a nightmare! At least until Mr.Putter and Zeke have a man to dog talk. In this, the second book in the series, we meet Zeke and Mrs. Teaberry for the first time, and while I will say I don't think this is the best book to start with in the series - the chemistry isn't quite there yet - I should also note that my daughter enjoyed as much as any of them.

Mr. Putter and Tabby Bake the Cake
Mrs. Teaberry inexplicably loves fruitcake. Or, at least, Mr. Putter finds it inexplicable. For Christmas Mr. Putter decides he wants to make her a cake that won't hurt her foot if she drops it. But he has never made a cake before! Another sweet story about this wonderful elderly couple.

Mr. Putter and Tabby Pick the Pears
Mr. Putter loves fall, because that's when he can pick the juicy pears from his tree and make pear jelly. But this year Mr. Putter's cranky legs aren't cooperating – he can't make it up his ladder to pick them. But that isn't enough to stop this inventive senior. Mr. Putter remembers how, as a kid, he used to use a slingshot to knock things down. He fashions his sling, takes careful aim at his pear tree, and gives it a go. It turns out, however, that his slingshot is much more powerful than he thought, and Mr. Putter spends the next several hours launching apples high, high, high into the air, until they disappear over his house. Great fun... though it does nothing to get his pears down. And it leaves him without any apples too! Fortunately, Mrs. Teaberry comes to the rescue.

Mr. Putter and Tabby Row the Boat
On this very hot summer day, and Mr. Putter figures out a great way to stay cool. He takes Tabby, and his neighbor Mrs. Teaberry, and her good dog Zeke, out on the lake. And on an island in the middle they eat their lunch and he and Mrs. Teaberry share "tall tales" from their lives. This is the first book that had me hoping the author would soon write "Mr. Putter & Tabby Pop the Question." 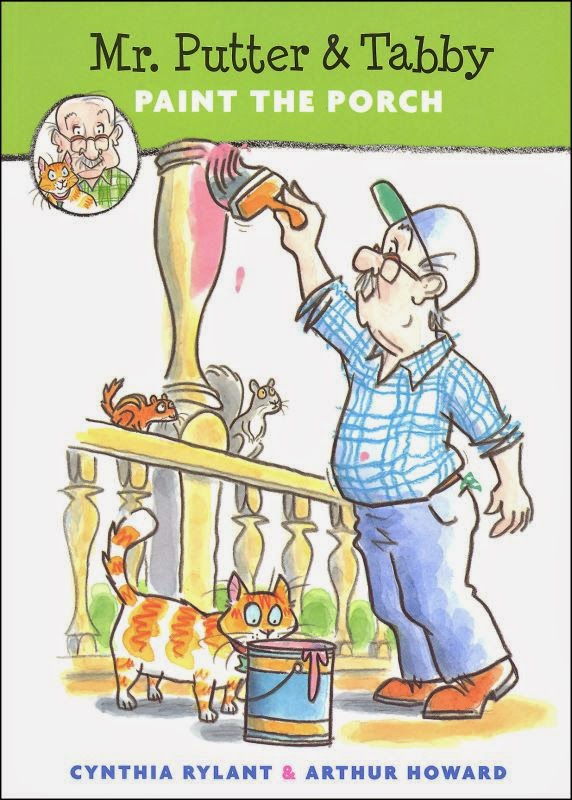 Mr. Putter and Tabby Take the Train
What could be better than going on a train ride? The only problem, it turns out, is that trains don't allow pets. But this rule is bypassed when Mr. Putter backs Zeke into a backpack, and Mrs. Teaberry carries Tabby on the train in a picnic basket. This is the only book in the series I might give a miss – I don't want to teach my very young daughters that it is clever to figure out how to get around rules.

Mr. Putter and Tabby Toot the Horn
Mrs. Teaberry decides that since she and Mr. Putter like music so much, they should be in a band. But what sort of band can they be in, since neither knows how to play an instrument?

Mr. Putter and Tabby Paint the Porch
Mr. Putter's porch is looking a little shabby. But when he gets out the pink paint, a squirrel decides he might want to help. Soon little pink paw prints are everywhere! Fortunately Mr. Putter has a wonderful neighbor, Mrs. Teaberry, who is happy to help him clean up the mess.

Mr. Putter and Tabby Catch the Cold
"When Mr. Putter was a boy, he had almost liked colds. He always got spoiled." But now that he's old, it's not good to have a cold – there's no one to spoil him! Or is there? Mrs. Teaberry, and her good dog Zeke, make sure that this is "the best cold Mr. Putter ever caught."

Mr. Putter and Tabby Stiry the Soup
Mr. Putter and Tabby both love soup, but there always seems to be something stopping: either they don't have the onions, or the beans, or the macaroni. And then when they finally have all the ingredients the trusty stove decides not to work. But no worries - Mrs. Teaberry would be happy to let them use her stove. And, of course, Zeke won't be a bother, right?
One caution offered: Mr. Putter says "Jiminy!" which, as the urban dictionary puts it, is "a way of swearing without swearing." I have no problem with it, because Jiminy is not God's name, but mention it because I understand why some might think differently.

Mr. Putter and Tabby Write the Book
When a snow storm keeps him indoors, Mr. Putter decides to become a mystery writer. He soon discovers there is a lot of preparation involved in getting ready to write - snacks don't just fix themselves! When Mr. Putter's writing strays from mysteries and towards the many good things he sees all around him, Mr. Putter is a bit discouraged... until Mrs. Teaberry cheers him up! 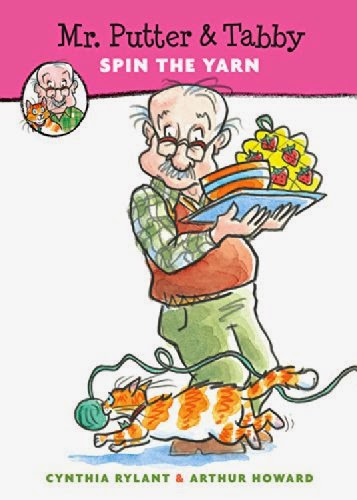 With a shock Mr. Putter realizes that today is his birthday, and while he thinks he's too old for cake, candles and presents, he still wants a celebration. So he calls up Mrs. Teaberry. She is happy to come over... but she first needs to do some chores. While Mr. Putter waits, increasingly impatient, Mrs. Teaberry is preparing a surprise!

One caution offered: Mr. Putter says "Good heavens!" which, because it is what people say instead of taking God's name in vain, is still viewed by some as being objectionable. While I might dissuade my own kids from saying it, "Good heavens" is not God's name, so I don't have a big problem with it. I mention it here because I understand that some might think differently.

Mr. Putterand Tabby Spin the Yarn
Mrs. Teaberry is a very good neighbor, a cook and a baker who loves to share her culinary creations with Mr. Putter. But Mr. Putter has started to wonder if he's a good neighbor – what does he do for her? So he decides to do something nice, by serving tea to Mrs. Teaberry's knitting club. But being a good neighbor turns out to be quite a bit harder than Mr. Putter thought!

Mr. Putter and Tabby See the Stars
Mrs. Teaberry likes to feed Mr. Putter. And Mr. Putter likes to be fed by Mrs. Teaberry. But one night he so enjoys himself that he doesn't notice just how many of her jelly rolls he has eaten. Later that night he does notice - his grumbling tummy won't let him sleep. So he and Tabby go for a walk in their neighborhood. And who do they meet? Mrs. Teaberry! It seems her good dog Zeke also had too many jelly rolls, and his tummy wouldn't let him sleep either. Mr. Putter and Mrs. Teaberry tell each other "stories in the moonlight. They told secrets. They make each other laugh." This is another sweet simple story that will have you rooting for Mr. Putter to get down on one arthritic knee.

Mr. Putter and Tabby Spill the Beans
Mrs. Teaberry is very good at coming up new things for her, and Mr. Putter to do. Of course, sometimes these new things don't work out. But they are always an adventure. This time around Mrs. Teaberry wants the two of them to take a cooking class: one hundred ways to cook beans! To Mr. Putter this doesn't sound like it will be much of an adventure. "But he wanted to make Mrs. Teaberry happy. Fortunately Tabby and Zeke are able to turn this into an adventure after all.

Mr. Putter and Tabby Clear the Decks
Mr. Putter thinks that Mrs. Teaberry is a genius when she decides they should have an adventure on a sightseeing boat. But as much as Mr. Putter likes the boat, Zeke likes it even more. When he decides he doesn't want to leave, it is up to the boat's captain to talk Mrs. Teaberry's good dog into letting go of the mast.

Mr. Putter and Tabby Ring the Bell
Mr. Putter gets all nostalgic about school, and arranges to visit a first grade classroom. Tabby and Zeke arrange to make this a very memorable visit!

Mr. Putter and Tabby Dance the Dance
Mr. Putter may have two left feet, but Mrs. Teaberry thinks he is a wonder! I wonder when he is going to ask her to marry him!
Posted by Jon Dykstra at 8:58 PM