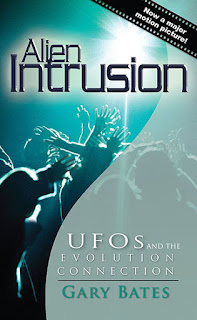 Are people actually being abducted by aliens? You might expect a Christian book on this subject to answer the question with an emphatic “no” but Gary Bates give a more equivocal answer that could best be summarized as, “sort of.”

Alien Intrusion is a book that could be given to anyone interested (too interested?) in science fiction, whether they are Christian or not. The cover and first few chapters hardly give a hint that this is a Christian book, and initially it seems to be making a case for UFO’s and aliens. Bates notes that millions of people, including a past president of the United States, claim to have seen a UFO, and many popular TV shows, likes Star Trek and various science fiction movies like 2001: A Space Odyssey assume that aliens are somewhere out there.

But after delving into what people think about aliens and UFOs the author then begins, step by step, to explain why aliens could not possibly be visiting us from other planets. Most of the reasons are simply practical - the distances are too far and the energy needed simply too immense.

Despite the fact that it is physically impossible for aliens to be visiting us, the author doesn’t believe that every story of alien abduction is simply a lie or a delusion. After debunking many famous “UFOlogists” Bates notes that there are still too many ordinary folks – people who have nothing to gain, and personal credibility to lose – making abduction claims to simply dismiss the phenomenon altogether.

This is where the book starts to become clearly Christian. The author argues that it is really only now that our world has embraced evolution (and dismissed God) that UFO sightings have start springing up all over. There is also a strong correlation between UFO belief and occult experimentation – many of the more famous “UFOlogists” have also dabbled in the “dark arts.” It is worth noting too, that the messages “aliens” pass on are often direct attacks on the Bible, portraying Jesus not as the Son of God, but merely as some advanced alien.

So are people being abducted by aliens? Bates argues that while some people may indeed be having these encounters it is not with aliens but rather with demons masquerading as extraterrestrials.
This is a great book for any and all who are fascinated by science fiction; Bates employs a Christian worldview to separate the fact from the fiction.
Posted by Jon Dykstra at 6:00 AM No comments:

Blueberries for the Queen

I hate blueberries but I loved this book.

In this true story set in Lee, Massachusetts in 1943, a small boy dreams of doing great and heroic things. His whole family is involved in various ways in aiding the war effort but he is repeatedly told that he is too small to be of any use.

Then the Dutch Queen Wilhelmina, who had to leave her country because of the Nazi occupation, comes to spend the summer just down the road. William wonders about the queen. Does she wear her crown all the time? How about her scepter? If only he could help the queen in some way, like the knights of old used to do. One day while helping his father pick (and eat) blueberries an idea occurs to him. He will take some blueberries to the queen. Maybe he will even get to see her. And when William is ushered into her majesty’s presence, by princess Juliana, he finds the queen “a plump, white-haired lady in a regular old dress.” She is disguised as a grandma!

As a former primary teacher I have read many, many (and I do mean many) books to children so I know what they like, and they would love this one. As a bonus, adults of Dutch descent will love the story too, and will really appreciate the gorgeous illustrations.

Though this book was published in 2004 it really is a classic, and should be added to your oldies but goodies list. It is on mine.
Posted by Jon Dykstra at 6:00 AM No comments: 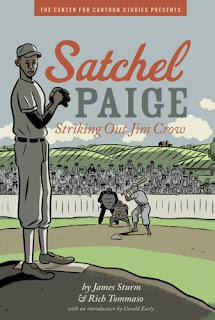 The problem common to most every sports biography is the over-the-top adulation directed at the subject. It's the rare book that makes it clear they are celebrating the accomplishments of a man, rather than a god.

But in his lifetime Satchel Paige rarely received that sort of worshipful adulation – he was a man as hated for his amazing abilities as admired. The experts place him among the very best baseball pitchers ever but when he was at his very best, in the 1930s and 1940s, it was dangerous to be that good, or at least, dangerous if you happened to be that good and black.

That he was black gave many at that time all the reason they needed to hate him. And the better he was, the more they hated him. A humble, subservient black man – that they could tolerate. But an accomplished one? A black who was not just as good, but clearly much better than any white he played against? That just didn't fit into their worldview... and yet it was so, and Paige wouldn't let them forget it!

So what makes this a great story is that it is about so much more than the man. To be sure, Paige is given the typical sports hero treatment – his physical abilities are shown as being just short of miraculous. But what's really being celebrated here is not the man, and not his talents, but the purpose he put his talents to. By showing – and even showing off – his baseball superiority, he proved to the opposing players that he wasn't their lesser. Because he was better, they had to acknowledge him as an equal. And while there were more than a few who simply refused to learn the lesson Paige was teaching, the paying audiences, black and white, understood.

This is a decently drawn, and a very well written graphic novel, that illustrates an important and painful part of US history. I would highly recommend it, but not before mentioning two cautions. 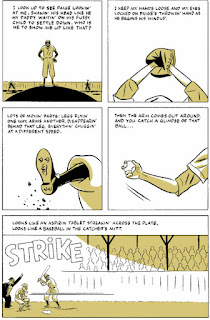 First, this there is one very notable language concern. In the novel's climactic scene, a particularly nasty white baseball player calls Paige the "n-word." In the context it is an appropriate use of the word, as it shows just what sort of prejudice and denigration Paige faced on a daily basis, and the insult is quickly answered as right afterwards this man gets his comeuppance at the hands of Paige. Still, the history of this word, and its present power means that it usage has to be discussed – parents can't just hand this comic to their kids without talking about it.

Second, while the moral of this story – that all human beings are worthy of respect – is one Christians will agree with whole-heartedly, it's important to note that this is not a Christian comic. When God and His Church are mentioning briefly in a two-page spread near the middle of the story, it is only to note that the hope and solace some blacks found by turning to God isn't shared by all. The narrator of the story remains bitter at how he and his family have been treated by whites, and only gains some hope after he sees Paige triumph. So the narrator's hope is found in a man, not God.

That's a notable problem, but it remains a remarkable book, and an engaging way to learn about this period of US history.

You can pick up a copy here at Amazon.com – use the link to send a tip our way at no cost to you.

About a Canadian who was The Strongest Man in the World: Louis Cyr
When silent film star Buster Keaton was a boy: Bluffton
On a failed expedition to the South Pole: Shackleton: Antarctic Odyssey

Posted by Jon Dykstra at 8:31 PM No comments:

I've just discovered that this book is so very beloved by the Dykstra clan, two of us decided to review - both Jeff and I did reviews. For the sake of brevity I've consolidated both reviews here, and started off with Jeff's quick review, followed by my slightly longer one.

The six books of the Archives of Anthropos, by John White, begin with The Sword Bearer. In a sense, the series is an updating of C. S. Lewis’s Narnia series. In The Tower of Geburah, for example, the children are ‘sucked into’ Anthropos through an old television. The books are considerably longer than any of the Narnia books, but just as full of intriguing and infuriating fantasy characters, as well as explorations of the dilemmas and temptations of growing up, sometimes with considerably grittier and more modern problems than Lewis's characters faced in the “real world.”

If your kids are asking for the latest vampire or werewolf fantasy books you might consider getting them The Sword Bearer instead. This is a decidedly better brand of fantasy fiction.

That’s not to say the Christian fantasy genre is without controversy. C.S. Lewis’ classic Narnia series featured God represented as a lion, and some parents don’t think this is respectful enough. The Sword Bearer’s author, John White, avoids this particular controversy by portraying God as a blinding, comforting light. Still, if parents don’t like the Narnia series they probably won’t like The Sword Bearer either.

The book begins on John Wilson’s thirteenth birthday. He is excitedly rushing home because today is the day his grandmother promised she would tell him about his parents. Unfortunately for John, by the time he gets home his grandmother has died. But even as John is coming to terms with his loss he is magically transported to the kingdom of Anthropos. Here he is acclaimed as the Sword Bearer, the hero who will slay the Goblin Prince.

Anthropos is populated by Matmons (dwarfs), talking donkeys, eagles, bears and evil goblins. The setting will be familiar to parents who have read The Tower of Geburah in their youth. The Tower is probably John White’s most famous book and though it was written in 1978, is actually the third book in John White’s Archives of Anthropos series while The Sword Bearer, written in 1986 is the first. There are six books in total in the series which was completed in 2001.

God is ever present in these books and He is clearly the Christian God. Referred to as the Changeless Changer, and the Beginner of the beginning this God saves his followers by grace alone, and not because of any heroic deeds they may do.

The book also takes a stand against magic, which seems a rather strange thing for a fantasy book to do. The good “magician” in the book, Mab, insists that he does not practice magic but instead God performs miracles through him. The difference he explains is that magic is performed by those who use power to defy God, while he only uses the power given to him to do as God directs.

I would thoroughly recommend this book and estimate it is probably aimed at 10-14 year olds (though adults may enjoy reading it to their kids).
Posted by Jon Dykstra at 6:00 AM 1 comment: