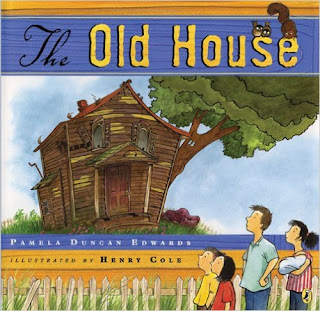 This is a sweet picture book about a self-absorbed house who learns to think about others.

Why is the house self-absorbed? Well, "no one had live in it for a long, long time" so it was quite lonely. And when people passed by they would often say, "Did you ever see such an unhappy old house?"

The house does have friends - birds, a squirrel, wildflowers, and a large oak tree - who do their best to encourage it. But it feels so empty inside that when people do come by to see the house would quickly leave again. "The only thing to do with that dump is to knock it down," a man sneered.

But then, one day, a family stopped by. They liked the house. They had never lived in a house before. But just as they were considering whether to buy the old house, it let out "one of its big, sorrowful sighs" and the family quickly left. "I think it might have rot," said the father.

When the family comes back for a second look, the house takes a long look at the family and saw wishful, uncertain, eager faces. "This family needs me," thought the old house... and it shook off its self-absorbed sorrow and stood tall. But the family left once again.

I won't tell you how it ends, but I will note that the house's friends – the oak and the squirrel – were encouraged that finally the house had stopped feeling sorry for itself. That makes this story with a moral that any kid can understand. Both my older daughters, 3 and 5, really enjoyed it.

If you want to get your own copy, you can find it at Amazon.com by clicking here.

Posted by Jon Dykstra at 8:42 AM No comments: If you only have a passing familiarity with the US civil war you might not know that it wasn't just a land-based battle. One lesser known aspect, investigated in this graphic novel, is the attempt by the North to use a naval blockade to stop the South from exporting their cotton. To break the blockade the South built a ship with an iron hull, a hull so strong that cannon balls would bounce off of it.

When the Merrimack was put out to sea it was every bit as devastating as it's creators had hoped, and was hampered only by an underpowered engine.

This is a fascinating tale, with the whole civil war as a backdrop. While the information is well researched, the book itself is drawn in a very comical style, with one character, Gustavus Fox, actually presented as a uniform wearing fox. So this is great for someone trying to get a good overview of events – at 128 pages it has the size to give us much more than a glimpse – but it wouldn't be the sort of book that would be cited in the bibliography of any paper.

So, entertaining and educational. A great book for 12 and up. The only cautions I can add is that on occasion "swear symbols" are made use of, and in other books in this series (but not this one) God's name is taken in vain. For reviews of the other "Nathan Hale's Hazardous Tales" click here.

You can purchase Big Bad Ironclad at Amazon.com by clicking here.
Posted by Jon Dykstra at 9:30 AM No comments:

Killing Calvinism: How to Destroy a Perfectly Good Theology from the Inside

Quick quiz - what's YRR? I didn't remember when I started reading this book, but it stands for Young, Restless, and Reformed. It truly is a matter for thanks and praise to God that many of the young and the restless are turning to Calvinism to find the rest they are seeking; however, Greg Dutcher's book warns us that being, or becoming, enthusiastically Reformed has its dangers.

What makes Dutcher's cautions so effective is that he is humble enough to confess that he has not always been so humble in his embrace of Calvinist theology. Like a (small-r) reformed smoker, there is often no-one so obnoxious about his new life as the recent convert. Dutcher narrates his own story of his conversion to Christ -one that humbled him - and his subsequent acceptance of Reformed theology - an increase in understanding (and even in wonder) that often did not increase his humility.

Sadly, it is not only young Calvinists who lack humility. I know that I either personally have been guilty of some of the sins Dutcher identifies, or know of older members whose Calvinism leads to pride rather than humility.

For instance, Dutcher describes how Calvinists often love Calvinism as an end in itself - identifying themselves as Calvinists before they identify themselves as Christians. We also need to guard against becoming theologians instead of disciples - head service instead of heart service. Another issue that Dutcher deals with has also been raised extensively in many Reformed churches recently - the need to renew our love for the lost. One problem that I have seen of late on Facebook and other social media is one of our approach to non-Calvinists - scoffing at their hangups with Calvinism rather than lovingly seeking to understand the reasons for their resistance and deal with them with gentleness and respect.

The above challenges are only four of the ways Dutcher shows how Calvinists often discredit the Biblical truth of Reformed theology. He deals with four others (but you'll need to check out the book to find out which ones!). What makes each of the eight main chapters an even more winsome inspiration to self-examination is the fact that each ends with Calvin's own method of ending his lectures  - a prayer that God will work in our hearts a willingness to truly love our neighbour and glorify God in our Calvinism. If you believe that a better presentation of the beauty of the TULIP (summarized in the back of the book) would bring greater glory to God, and that this book will help you do that, you can get it at amazon.com through this link!
Posted by Jeff Dykstra at 12:30 AM No comments:

Blame it on the Brain? 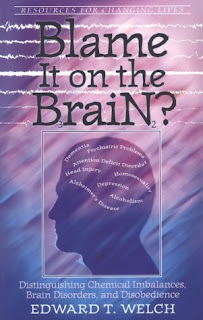 A boy won’t sit still so the doctor wants to put him on Ritalin. An aging grandfather, suffering from Alzheimer’s Disease, is starting to make inappropriate comments to his grandchildren. A mother is depressed and asks her minister what he thinks about anti-depressants. These days we’re regular confronted with “brain issues” but few of us feel equipped as to what God thinks on these matters.

Author Ed Welch notes that while going to the Bible would be the natural thing for us to do with most other matters, it might strike Christians as an odd approach in this case – after all, what does the Bible have to say about our brains? Welch answers that question by noting that God made us, so He knows what we are really like. And what God reveals about us – about how our body and spirit are both distinct and yet impact each other – is foundational to a good understanding of our brain.

Blame it on the Brain is divided in two parts. In Part One Welch offers up the theological resources Christians will need to be able to “dialogue with the brain sciences.” These are the biblically-derived principles by which we can interpret and understand the (mostly secular) brain research being done. Once we are outfitted with the proper theology and taught how to apply it, Part Two then explores some “modern diagnoses and experiences, all attributed to the brain, and considers them from a biblical perspective.

Where Welch places different conditions will strike some readers as controversial. Doesn’t the world say all of these conditions should fall under the “The Brain Did It” umbrella? It does indeed, because the world think if the brain did it, then our sinful hearts can be excused. “Born this way” is supposed to clear us from any responsibility for our conduct.

But Welch’s three-fold division is less controversial when we understand that even conditions with clear physical causes, like dementia, will have a spiritual dimension as well – responsibility persists, even if it is to a far different degree.

For example, if a dementia patient’s confusion leads him to believe he has been waiting for his daughter all day long (even though she arrived right on time) she should try not to be bothered if he expresses some frustration. However, if the same patient starts making crude comments to the nurses, then that should not be dismissed as simply the disease talking. As Welch writes:


Does the disease create the sinful behavior? Definitely not…. Sexual thoughts, jealousy, private profanity, and anger can be neatly covered when our minds are intact. But when we are intellectually less competent, some of the private events begin to slip out.

Dementia isn’t the cause of this sin; it simply reveals what was always in the heart. In a situation such as this repentance should still be be sought. Even when our brain is damaged, we remain both physical and spiritual beings, and as in need of accountability, correction, and forgiveness as the rest of humanity.

The only caution I have is not with what Ed Welch wrote, but with how a couple of passages might be misunderstood.

A second matter that might be misunderstood is how Welch designates homosexuality as something “the brain didn’t do.” If he denies the brain dictates someone’s sexual preferences, is Welch saying everyone chooses to be homosexual? No. Welch is only arguing that while the brain may have an influence it cannot be credited as the sole determiner of their sexual orientation – other factors have to be involved.

This isn’t a large book, but there sure is a lot to love! I must have highlighted half of the pages and I really can’t say enough good things about. Educational, thoroughly biblical, helpful, applicable, and it still manages to be enjoyably readable. This would be a valuable resource for minsters and elders, and a highly recommended read for everyone. We all need to learn how to think biblically about mental illness and matters of the brain and I can’t imagine a better introductory book for this topic. You can buy it at Amazon.com by clicking here.
Posted by Jon Dykstra at 4:59 PM No comments: