The Roots of Obama's Rage

The author has an intriguing hypothesis - he argues that we can't understand President Obama, and what drives him, unless we first understand what drove his father.

Now it might seem implausible that Obama would be driven by the same motivations as his father. After all, he hardly knew his father, meeting him in person just once, as a ten-year-old boy. But despite the minimal contact, the President's autobiography, and its telling title - Dreams From My Father - make it clear that his father had an enormous influence on him.

When the First World colonized the Third, they brought with them advancements in medicine and agriculture, they created infrastructure and markets, and along with this came missionaries with the Gospel. So why would anyone object to colonization if it brought all these benefits? Well the benefits didn't come without a cost. Europe didn't come in peace to these lands; they took them by force. So colonization brought with it a mixed bag of blessings and conflict, and anti-colonials focused only on the latter.

An anti-colonial's objective then, is to free his country from "paternalistic" First World control. In its more extreme form, anti-colonialism wants also to remove any trace of, and connection to the "Mother" country. They hate their Mother, and want nothing to do with her.

To make a long review short, Dinesh D'Souza lays out some intriguing evidence that Obama is purposely trying to undermine the influence of the US, because it is the last great "First World" power. Though the US isn't colonial like France and Britain once were, critics often talk of the US presence in Iraq and Afghanistan as being expansionist and colonial. So, D'Souza argues, as an anti-colonialist Obama wouldn't want the US to be in either of those countries. But political pressures won't allow him to simply withdraw, and in fact these pressures pushed him to send a surge of troops to Afghanistan. But then Obama did something that would have to be understood as incredibly stupid if viewed in any other but an anti-colonial context. After sending the surge Obama sabotaged it, by announcing that it would only last for a year. He let the terrorists know that they just need to hunker down for a year, and if they do that, then after that they will be free to resume their monstrous activities, without hindrance from the US army. So Obama was either very stupid to announce the one year deadline, or, from an anti-colonial perspective, quite brilliant, because he undermined the US's "expansion" into this foreign land, but did so in a way that allowed him to minimized political fallout back home.

I'm not giving D'Souza's anti-colonial hypothesis the detailed explanation it deserves. To properly evaluate his argument you're going to have to read the book, and I would encourage you to do so. I'm not sure he has it totally right, but his hypothesis does a better job of explaining the President's actions than any other theory I've heard. And if you think his hypothesis sounds plain old crazy, I should note, that D'Souza is a well-respected, well credentialed author - he's no right-wing kook. D'Souza has written extensively for the National Review and is currently the president of the King's College in New York City. So yes, his hypothesis sounds strange, but truth is sometimes stranger than fiction. Two very enthusiastic thumbs up!
Posted by Jon Dykstra at 6:09 AM No comments: 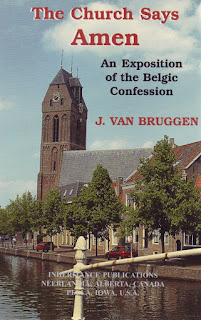 This book was a joy read! Not that it was always easy to read – it is primarily a study book. The author originally wrote this as a textbook for reformed colleges. Subsequently it was published for a larger audience because this guide to the Belgic Confession filled a need. Study groups and many individuals found this commentary comprehensive and sound, yet not too lengthy or too elaborate for their purposes.

Reading this book was an adventure. Rev. van Bruggen’s comments and insights into the wording of this confession always lead to what the Scriptures say. On this journey we rediscover the wealth of wisdom that has been preserved for us – that we have inherited – in this confession.

But do we really need such a formalized summary of our beliefs? “Throughout the English-speaking western world, today’s generation is taught to give more credence to one’s personal experiences and thoughts than to the wisdom our fathers accumulated over their years of being busy with God’s revelation. That can only mean an impoverishment for the future, simply because the human heart is depraved and therefore by nature not tuned in to God’s revelation. To act as if we are the first to read God’s word is folly to the extreme. We need to stand on the shoulders of those who have gone before us, to learn how they applied God’s promises in the grit and grime of life’s struggles, and repeat for ourselves (be it with words learned from them) what God has promised also to us – for His promises do not change.” So says C. Bouwman, convincingly and eloquently, in the preface he wrote for this commentary.

The original publication in Dutch has already stood the test of time. And to that I can add that the translation is worthy of the original. The prose flows smoothly. That is quite an unusual accomplishment. Too many translations are mere word substitution efforts. But this one was done by someone with a feeling for the English language. The translation is faithful to the original, yet shows translator’s courage in grappling imaginatively with unique Dutch phrases or grammar. I found very few Dutchisms.

The Church Says Amen is unhesitatingly recommended. Just one word of advice: if you find the first two chapters a little choppy, please persevere – they’re only ten pages, and they form a very terse overview, history and introduction to the confessions in general and the Belgic Confession in particular. Difficult reading yes, but read them anyway. They’re worth the effort!

C. Bouwman ends the Preface with these fitting words: “May the Lord grant that this work be received as readily as it was in the Dutch-speaking world where it first appeared, and so be of service in equipping today’s generation of modern Christians to echo whole-heartedly the glorious promises God has given in Jesus Christ.”

It can be found at Inheritance Publications or here at Amazon.com

This book was lent to me by a good friend who recommended it highly. I was a little skeptical at first because I don’t generally like Christian women’s fiction – it is too often written to a formula and it can be rather sappy. But while I was still reading it I noticed a young lady at church stuff another copy of the book into a friend’s mailbox. I asked her how she liked it and she said it was fantastic. When you add my vote in as well, that makes three recommendations for you so far.

Eve’s Daughters is the story of four generations of women and how their lives, relationships and marriages impact their daughters’ lives. It shows how the second commandment applies to mothers and their daughters as well: “…for I the Lord your God am a jealous God visiting the iniquities of the fathers upon the children to the third and fourth generation of those that hate me but showing steadfast love to thousands of those who love me and keep my commandments” (Exodus 20:5-6).

The story is mainly about Emma, a daughter born to immigrant parents. She is a rather free spirit who has trouble living by her parents’ rules. Their view of life and the living of it is too “old country” and dated. Emma considers herself an American, not a German-American. (It is rather interesting that for many first generation Canadians born to immigrant parents, some of the same thoughts and feelings come up. They too, have often felt caught between the old and new world and may have found their parents out of touch with their adopted country.)

But eventually Emma comes to see that the “rules” of the previous generation have value and are of great importance. She realizes that some of the choices she made in her life have caused great harm to her daughter and even her granddaughter. She must tell them the truth that she has kept carefully hidden for fifty years, and by doing so also free herself of the animosity that she feels toward God and reconcile with Him. Emma and her daughter and granddaughter learn that love – true love – forgives, just as we are forgiven by God through grace alone.

It is a beautiful book and I truly enjoyed it. I hope you will too.

by Diet Eman with James Schaap
Wm. B. Eerdmans Publishing, 1999, 398 pages
To survive the war, Diet Eman had to become hard. There was no time to feel; there were too many people depending on her. So Diet continued her work for the Dutch Resistance, even while her friends were being arrested, even after she was imprisoned, and even while her fiancé Hein was locked away in a concentration camp.
But as hard as she became, diary entries through the book testify to how Diet was sustained not by her own strength, but rather her dependence on God. She was constantly confronted with danger but carried on in the confidence that she was doing what her Father wanted her to do, that whether she lived through the war, or was killed, that she was safe in His keeping.
And as hard as she became, Diet was also a woman deeply in love with her Hein. Things we couldn’t say consists of two parallel stories: the first is a drama, telling of how, through the courage of Diet and Hein hundreds of Dutch Jews were saved, and the second a romance, telling of the good and godly passion of these two Christian young people.
This is a powerful biography that will make most anyone cry, particularly those of Dutch descent.
Posted by Jon Dykstra at 6:00 AM No comments: