I'm not normally one to read mystery novels, nor one to browse in thrift stores, so you can imagine my surprise when I recently found myself buying  An Unholy Alliance from a neighborhood thrift store. To my delight, I found a really good book.

If you like mysteries and historical novels, I think you'll like this story. It's set in Cambridge, England, shortly after the town (and most of England) has been devastated by the Plague, or "the Death" as many characters in the book refer to it. The Plague, it seems, has brought out the worst in people, and several of the town's prostitutes are murdered. Then a thief is found dead after attempting to steal highly secret university documents, a university official goes missing, and when a grave is exhumed it contains the wrong person. As Shakespeare might have said, there's something rotten in the state of Cambridge.

A university lecturer, Matthew Bartholomew, is asked to investigate the goings on. You wouldn't expect an English physician trained in Paris by an Arab doctor to be a good sleuth, but he is. His slightly different view of medicine in particular and the world in general give him unique insights into human nature.

The language of the book is generally clean except for two or three archaic curses (is a curse still a curse if you don't understand what it means?). There also seems to be a current of skepticism by logical characters like Bartholomew towards the devout believers whose faith is closer to superstition than trust in God. There is a curious lack of intelligent, thinking, and yet devout Christians in the story. Though it doesn't hurt the storyline as such, it makes you wonder what the author's worldview is like.

This is the first book by Gregory that I've read, but I'll be on the look out for more. As every page was turned, the mystery and morass got deeper and deeper and I wondered how it could all be solved. Yet it did work out and the ending was satisfying. I'll be on the hunt for more novels by this author to see if they're as good as this one.
Posted by Linus at 1:00 AM No comments:

Jay Adams: "Do all religions lead to God?"

In Together for GOOD, Jay Adams gives readers a fictionalized conversation between Greg Cunninghamm, a pastor, and Bob Rawlston, an unbelieving man wrestling with the Book of John. One of the Bob's struggles is with John 14:6 where Jesus says, “I am the way and the truth and the life. No one comes to the Father except through me." It is the exclusive claim of the last sentence that bothers Bob.

"I always thought that whatever religion you accept, so long as you are sincere, it will ultimately lead you to God. But Jesus doesn't provide much room for anybody except those who believe in Him?"

The Pastor has two responses that are worth passing on:

"If all religions lead to God, surely He wouldn't be much of a God since He'd be a contraction in Himself. You see, since every religion contradicts every other, and if all of their ways lead to God, then God Himself must be confused. You wouldn't want to believe in a God who says one thing today and the opposite tomorrow, one thing to one person and the opposite to another, I'm sure?"

"..... And think of this: if people can be saved from their sins some other way than by believing the Gospel, then Jesus' crucifixion was not only a senseless tragedy, but sending Him to die was a stupid, brutal act on God's part. No matter how you squeeze it, when you think rationally, you have to come to the conclusion that if there's one God, there can only be one way."

Posted by Jon Dykstra at 2:49 PM No comments: 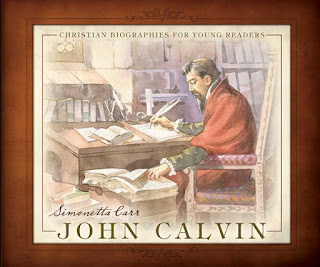 Simonetta Carr has created an impressive educational resource that parents and teachers will absolutely love… and children will like.

Parents and teachers will love it because it has good pictures and strong writing that make it an excellent read-aloud book. Though in the format of a picture book, it might be better to think of it as a chapter book – it is divided into seven chapters and has more than 50 pages and over 4,000 words. That length gives Carr the space she needs to deliver a solid overview of Calvin’s life and emphasize the importance of his work. It also allows her space to include more trivial but interesting tidbits, like the fact that some of Calvin’s opponents named their dogs after him, and that Calvin would occasionally play a game similar to horseshoes with his friends. There is really no better book to introduce young children to this Hero of the Faith.

John Calvin’s length and the serious subject matter do mean the book is unlikely to become one of your children’s favorites. However, if mom or dad decide to pick this off the shelf and read aloud a chapter or two, it’s also unlikely your children will mind at all. Recommended for 7-10 year-olds.

You can pick it up at Amazon.ca here and Amazon.com here.
Posted by Jon Dykstra at 6:00 AM No comments:

Till We Have Faces 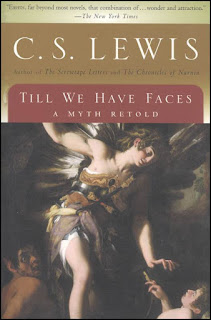 It is hard to describe the beauty of this book. Let me start by noting that Thomas Bulfiinch's retelling of the original Greek myth of Cupid and Psyche (which you can find at http://www.shmoop.com/cupid-psyche/myth-text.html) is only about  seven pages. C. S. Lewis's reworking of the story is roughly forty times longer, but never lets the reader go.

Why is the book so compelling? The main reason is how creatively Lewis uses the myth to show us ourselves. He does this by making a minor character both the narrator and the focus of the story. After all, most (or all?) of us make ourselves both the narrators and the focus of our own stories, even though we are also ultimately minor characters in the much greater story of good news that God has told in Christ and continues to work out today.

I had never had any exposure to the original before I read C. S. Lewis's summary in the Introduction. The Greek myth has two themes. The first focuses on Psyche's struggles to survive the goddess Venus's jealousy of her beauty (just as Snow White is helpless before the envious queen in her story). The second has to do with Psyche's complex relationship with the god Cupid, and her struggle to trust him (as Adam and Eve failed to trust God in the garden of Eden, and as Israel failed to do in the wilderness during the exodus).

In C. S. Lewis's version, the narrator is one of Psyche's jealous sisters named Orual - jealous of Psyche's beauty, desperately craving Psyche's love, suspicious of others' jealousy of Psyche, and unwilling to believe that a god could really love her. It is as if the story of Cinderella were told by one of her stepsisters, but that stepsister both loved her and envied her. Imagine how that sister would regard the passionate love of the prince for Cinderella, and how she might react to it even after the "happily after after" wedding.

Aren't many of us prone to that same love/hate relationship with others - perhaps in our family, perhaps in the church family - who walk so close to God that it seems too good to be true? Even more, when our relationship with God in Christ is a rich source of strength and love for us, don't we find that many around us can be skeptical? Don't we see in the media an eagerness to debunk the faith of prominent Christians?

C. S. Lewis shows us that, ultimately, what is going on is jealousy. The gritty beauty of the story that I referred to at the beginning came from my desire to see what the god in the story - and the true God of history - can do with and for those who feel such jealousy without, at least to begin with, the love that should go with it. In the end, the story should also remind us of the parable of the prodigal son, and provoke us to ask whether our relationship with God is based on jealous self-interest (think of the elder brother), or - by the grace of God - love and trust in response to His passionate love for us.
Posted by Jeff Dykstra at 8:14 PM No comments:

The Cats in Krasinski Square

When the Nazis took Poland, they created a Jewish “ghetto” in the capital city of Warsaw – Jews were forced to live in one area of the city which was then surrounded with a high brick wall to keep them in. The ghetto was overcrowded, and food was scarce.

Though this is a grim setting for a children’s picture book, this is certainly not a grim book. It tells the story of a Jewish girl who has escaped the ghetto, and lives outside the Wall masquerading as a non-Jew. She has befriended the stray cats that live in the cracks and dark corners of the Wall. When her older sister Mira tells her of a plan to bring food to the ghetto Jews, she can help, by telling Mira about all the holes in the Wall that the cats travel through. And when the Germans find out about this plan, and bring their dogs to find out who is bringing food to the Wall, this little Jewish girl helps again…by bringing cats to distract the dogs!

This is a gorgeous picture book, and a story of courage, cleverness and hope. And it is all the more wonderful because it is based on a true story!
Posted by Jon Dykstra at 6:00 AM No comments: