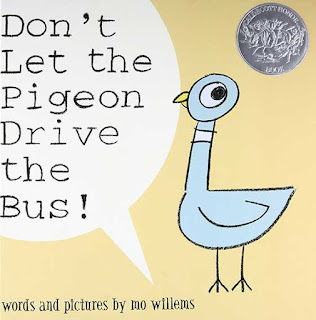 Pigeon desperately wants to drive the bus. But the bus driver, who has to leave for a little while, tells readers before he goes, “Remember, don’t let the pigeon drive the bus!”

The pigeon isn’t going to make it that easy though – for the rest of the book he asks, begs, pleads, whines and sulks about wanting to drive the bus. The drawings are pretty simple cartoons, but the artist lets us see all pigeon’s emotions in his body language. Pigeon uses every excuse you’ve ever heard a child use:


That, of course, is the point of the book, that no matter how inventive a child’s questioning – his whining – might become, no is still going to be no.

That’s an important lesson for any child to learn, and this is a fun way for them to learn it. Parents will enjoy reading the book out loud, mimicking the pigeon’s angst and frustration, and kids will enjoy just how silly the pigeon acts. And it will only take a little prodding from mom or dad to have junior realize that sometimes he acts silly too, just like pigeon.

I’d recommend getting the hardcover version of this book because I think your children will ask you to read it again and again. And that’s not too bad, because it is a fast read; there are only about 175 words in the whole book, which means this review is actually just a little bit longer than the book! 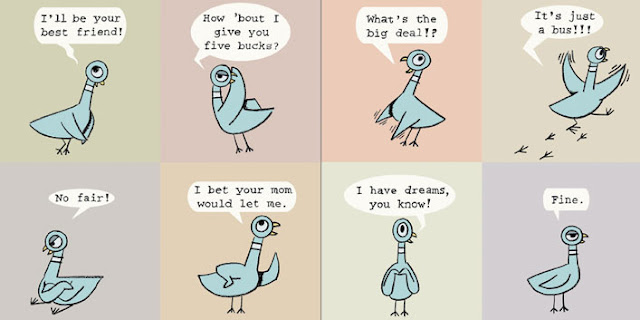 Posted by Jon Dykstra at 6:15 AM No comments:

Once An Arafat Man

I've been on a bit of a kick lately reading books about the Middle East, and more specifically about the Palestinian/Israeli conflict (two others I've read and would definitely recommend are Now They Call Me Infidel and Son Of Hamas). I've been surprised each time with how much I still have to learn, as each of these three books has offered a pretty unique perspective.

In Once An Arafat Man we see this conflict through the eyes of a man who joined the PLO as a teenager and was, soon after, murdering Israelis. He hated Jews, but his fierce hatred wasn't limited to just Jews - at one point he and his men try to assassinate the Jordanian crown prince. And one of his "fun sidelines" was to throw a grenade into the window of any Christian home he found out about.

What I found most interesting was how Saada became Christian. He had a long time friend who opened God's Word to him. But it took just one verse of Scripture, and, as the author describes it, he had no choice but to fall on his knees. He also describes hearing God speak to him at this moment. He hears a voice say: “I am the way and the truth and the life. No one comes to the Father except through me" (John 14:6).

Now I am normally quite suspicious when I read or hear a Christian talk about how God has spoken to them. I've found, more often than not, that Christians who make these claims are the very same who aren't avidly studying what God has said in his Word - instead of turning to where He has revealed Himself, they rely on feelings, and dreams and inklings, and call it God's revealed will. And often times that "revealed will" is superficial, or conflicts with the Bible (my father told me of how one Christian friend insisted that God had told him to divorce his wife and marry his hot, new, young girlfriend). There is reason then to be cautious when anyone talks of God literally speaking to them.

But Tass Saada's "mystical experiences" (he has more than one) aren't superficial, they don't conflict with the Bible, and he doesn't elevate them above Scripture. As he notes about his conversion, those who simply hear and believe "are perhaps the most blessed." He notes also that conversion via dream or vision is not normal, but is more common among Muslims. He sees this as evidence of God's power - Muslim authorities try to cut their citizens off from the Bible, but there is no stopping or containing God.

So I just had to marvel at how God will break down any resistance - His grace is truly irresistible!

Read more »
Posted by Jon Dykstra at 4:25 AM No comments: 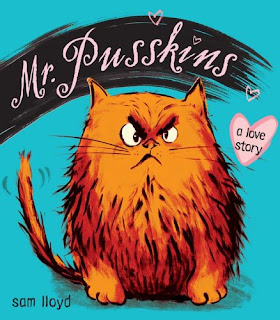 One of my favorite teachers was an English professor who would point out how the works of all the West’s great authors were either inspired by, contending with, or a derivation of something in the Bible. It turns out that what’s true for the greatest literature in Western Civilization is also true for Mr. Pusskins: A Love Story.

Now this is a great kids’ book any way you measure it: the pictures are big and bold, simple but still emotion-laden, and the author captures the very essence of “cat” with his main character. But what really sets this picture book apart is the biblically-based moral. Actually I’m not entirely sure the author did it consciously, but to any Christian the parallels to one of Jesus most memorable parables will just leap out – this is the tale of The Prodigal Cat.

Mr. Pusskins is a well-loved and well-treated cat. His master, little Emily, adores him. However Mr. Pusskins, as cats are prone to be, is rather self-centered and doesn’t realize how good he has it. He wants more and so one night he leaves to discover the rest of the world. He has fun, at the start. He plays naught tricks with the Pesky Cat Gang and goes all the places he isn’t supposed to go. But soon enough, after his friends abandon him and he gets lost and dirty, he starts to realize just how good he had it and starts to wonder if his master might still, possibly, love him.

I’d highly recommend this book. Little children will love the big bold pictures and parents can use it as an opportunity to talk about ingratitude. One caveat: little Emily at one point uses the expression “thank goodness” so I want to warn those who regard this as a too close substitute for the similar expression that takes God’s name in vain, that it does happen once.

You can pick up Mr. Pusskins at Amazon.com here and Amazon.ca here.