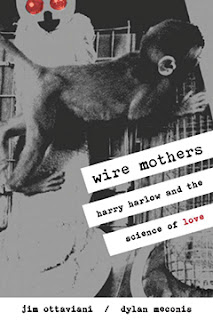 Many horrors have been done in the name of science. Wire Mothers is the story of how Harry Hawlow combatted one of them.

Now this "horror" might not seem all that horrible. In the first half of the 20th century, psychologists were warning parents not to show too much affection to their children. That doesn't seem so crazy; after all, we don't want to spoil them

But this is how one prominent psychologist put it, "Never hug and kiss them." What? Really?

Yup. American Psychological Association President John B. Watson encouraged parents to shake hands with their children rather than hug. That really was being promoted!

This is misinformation that Christians at that time should have been able to see through. since there is a lot of kissing and embracing going on in the Bible (just think of Jesus' story of the prodigal son being embraced by his father).

Many in the world swallowed this pseudo-science whole, but scientist and psychologist Henry Harlow wasn't one of them. He was Jewish, and doesn't seem to have been Christian (at least, not from what this book shares), but he did understand that parents hugging their children wasn't the problem it was being made out to be. In fact, he knew it was a good thing and set out to prove it, using monkeys.

Harlow rigged up an experiment in which monkey babies were "raised" by two surrogate "mothers" – each surrogate was a simple wireframe monkey body, with no arms or legs, topped with a simple-looking head. On the first "mother" they included a milk bottle inside the wireframe, with the bottle nipple situated so the baby monkey could cling to the wire and suckle at this "breast." The second mother had the same wireframe body and simple head, but didn't have a bottle. Instead it had soft terry cloth wrapped around the wire body.

So which "mother" did the baby have an emotional response to? The one that fed it, or the one with the terry cloth body?

While the baby monkey would feed on the "bottle mother" it would spend less than an hour a day on it, quickly returning to the cloth mother afterwards, where it would spend as many as 17 hours per day cuddling. As pale an imitation as this was to a mother's cuddling – this cloth surrogate had no arms to hold the monkey baby – it was a great deal better than the bare wire body of the first surrogate mom.

Harlow also discovered that when a frightening stimulus was brought into the setting – a noisy wooden creature – the monkey would go to the cloth mother. And, after seeking comfort, it would then feel secure enough to go investigate this clanking noisy creature. Harlow showed that if a monkey was to learn, it needed affection and comfort and cuddling, even if only from this surrogate mother. 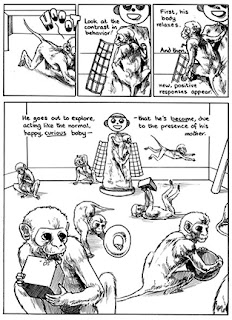 The first time I read this graphic novel, I was suspicious that this might have an evolutionary bias to it. After all, this was a book about the scientific take on love, and it involved experiments on monkeys, and applied those findings to humans. It seemed to assume that monkeys and Mankind were related.

While Harry Harlow probably had evolutionary beliefs, his findings are just as useful to Christians. Facts are facts, and the fact is, both monkeys, and people, do a lot better when we are hugged, held, and kissed. An evolutionist might assume that monkeys and men have this common need for touch because we are related, but a Christian we know that this is a matter of us both having a common Designer. God is love, so it it any wonder that love is also apparent in the animals kingdom? No, not at all.

Rather than bolstering evolution, this story highlights what happens when we have science untethered from God. Why did these scientists convince so many not to hug their children? Because the world listened more to these supposed experts than to what God says in his Word. And that's never a good idea.

I'll note a couple of language cautions: "crap" and "stupid ass." In the interest of thoroughness, I'll also note that while this isn't remotely titillating, there is a depiction of what might be the side of a naked woman, though with all the key bits covered up. There is also an episode in which Harlow gets rescued by a group of drunk navy sailors who sing (in the background) "I love to go swimming with bow-legged women, and swim between their legs." Any kid old enough to read this will not be impacted by either of these two concerns.

This is a great one for adults and older teens. It's important that both we and our children remember the many times and many ways that all-knowing "Science" has messed up in the past. As Wire Mothers shows, there are many scientists who are making pronouncements that go far beyond their findings. So, this small comic is actually quite an important book.

You can pick up a copy here at Amazon.com and here at Amazon.ca. Using our links to buy these or any other books helps support our site, as Amazon sends us a dime or two at no cost to you.