Charles Darwin's On the Origin of the Species 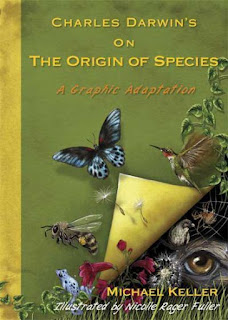 This is a decidedly odd recommendation - I am recommending a good adaptation of a horrible book.

Darwin's Origin of the Species is the foundational book for the theory of Evolution and author Michael Keller and illustrator Nicoller Rager Fuller have, here, done a good job of condensing the content of Darwin's book. By reading their version, instead of the original, a good understanding of Darwin's theory can be had in an hour or two, instead of a day or two. That is one reason I am recommending it.

Still, why would we even want a good understanding of Darwin's theory? The theory is bunk, so why waste our time learning about it?

It may be bunk, but it was once pretty influential bunk. It is, in fact, a book that changed the world because it offered an explanation to those that did not want to acknowledge God, of how life might have developed without Him. Even many Christians were convinced back in 1859, when Origins was first published, and tried to reconcile the Biblical account of Creation with Darwin's account - they thought his theory was so clearly true that the only way the Bible could also be true is if it was made to fit with what Darwin wrote. Inside the Church and outside, this book was causing tremors.

That's why it is still worth reading, though today even evolutionists disagree with almost all of what Darwin wrote. When he was writing it we hadn't yet learned how incredibly complex the cell was, and knew nothing about genetics, so Darwin assumed that life was far simpler than it has proven to be. He developed his theory while operating largely in the dark. 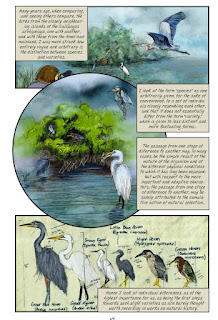 And yet, despite being full of what everyone today recognizes as errors, this book swayed many to deny God, and pushed many who still believed to try to accommodate the Bible to this new theory. Is there a lesson to be learned from this that we can apply today? Aren't we again being confronted with scientists saying they have it all figured out, and with Christians who say we should reinterpret the Bible in light of the latest scientific theories? As Yogi Berra said, "This is deja vu all over again." But while God's Word continues to be attacked, it continues to endure - that is a good take-away lesson.

Now the problem with this graphic adaptation is that it is written by evolutionists - the authors are www.AnswersInGenesis.org, www.Creation.com or www.ICR.org where all of Darwin's "evidences" for evolution are evaluated, and rebutted. I'm a frequent visitor to these sites, so as I paged through this graphic adaptation I was struck again and again by how Darwin's best arguments - including the ones still in use today - have been thoroughly dismantled by Creation scientists.
obviously fans of Darwin, and present his theory without critique (or, at least, without Creationist critique - they offer some improvements on his theory, updating it in parts). So this is not a comic you would simply hand to someone without warning or explanation. I recommend it only be used when combined with the websites of Creationist groups like

This is why I am recommending this book - if Christians were better aware of Darwin's theory, I think we would be a lot less intimidated by it. Of course this is not a book to give to the undiscerning. I would only recommend it to someone who was going to dedicate time to studying Evolution, and was going to put in the effort necessary to find answers to any questions the book raises.

You can pick up a copy at Amazon.com here, and Amazon.ca here.