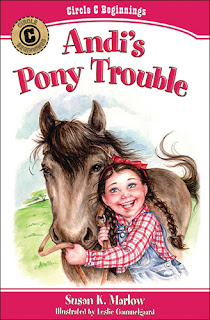 This was a very popular book in our family – it's a book about ponies and horses, so what's not for a little girl to love?

Andi is a 5-year-old girl, going on 6, who dreams of owning her very own horse. This is a much more realistic possibility for her than many girls today, since Andi lives on a farm in the West in the 1870s. She already has a pony, named Coco, but she doesn't appreciate him like she should - Coco can only trot, and that not fast enough for Andi's liking. So, since she's just about 6, Andi thinks her birthday would be just the right time for her mom to give her a horse.

That's the set-up, and of course there has to be some difficulties along the way. So as little Andi tries to prove she's big enough for a horse everything goes wrong. The author, Susan Marlow, does a good job of interjecting some comedy throughout - at one point Andi ends up with eggs on her head, and that, along with the illustration by Leslie Gammelgaard, had our girls giggling.

The author is Christian, and it shows – one clear lesson taught in the book is that parents are to be respected, and children don't know everything. Andi doesn't understand why her mother won't let her have a horse, but by books' end she comes to understand her mom knew best all along. Andi also gets into some minor naughtiness, but afterwards asks her mom, and her pony Coco, for forgiveness.

Our daughters loved Andi's ambition and adventurous spirit, and that made this a fun read for me too – it's always great to come along for the ride as our kids laugh their way through a book.

There are 11 pictures spread throughout, which helped make this a visual enough read for our just about 5-year-old who doesn't normally have much patience for anything other than picture books. I'd recommend it for 5 to 8. The only downside is that our horse-crazy girls are now even more so!

You can buy a copy of Andi's Pony Trouble at Amazon.com here and at Amazon.ca here.

Other books in the series

There are 5 other books in the series, and so far we've had a chance to read 4 of them. While I'll give a "two thumbs up" rating to the first, I've started having a problem with the way the author lets us hear Andi's thoughts. Andi knows she shouldn't say disrespectful things, so for the most part she doesn't. But she thinks them quite a lot... and that means there really is quite a bit of disrespectful dialogue in these stories. I think we'll still read the whole series since my daughters do really love them, and aside from the internal back talk Andi is quite fun. But I own the first and am not feeling the need to compete the set. Checking out the rest from the library is good enough.

I will also add one reservation about Andi's Indian Summer. This is the second book in the series and quite fun. However, in an attempt to teach kids not to be racist the author downplays the caution children should have around strangers. Andi and her friend Riley get lost and a helpful Indian man meets them. First he tells them they have to come with him. They protest, and say they have to go back because Andi's mom will be worried. Then he tells them he knows Andi's mom and she would be fine with him taking them back to his home.


"Andi and Riley looked at each other. This Indian was not taking no for an answer"

The author wants children not to be fearful around Indians. Fine and good. But what about strangers? I was reading this to my 4 and 6 year old, so I interrupted the story to explain that even if someone tells them "I know your mom and she says it would be okay" they need to come to me or their mom to check. I might be making too much of this – Andi was well and truly lost, so she didn't have much of an option. But this stranger was giving just the sort of charming, ready answers that I want to prepare my daughters to ignore. So this is not a book that a young child should read on their own – it needs mommy or daddy to do some explaining.

We've enjoyed Andi's Fair Surprise (about the family heading to the State Fair). Andi wants to bring her baby horse Taffy to the fair, to exhibit, just like her brothers are doing with cows and calves. But she's not allowed to. That gets her grumpy, but she learns in the end that you know what, Mom knows what she's talking about – will wonders never cease! This is a good fun little story that our daughters really enjoyed.

In Andi's Scary School Days Andi heads to school for the first time and doesn't want to go. The lesson Andi learns here is that school is not so bad after all. Good lesson for kids who are scared of school or hate it – not such a great thought to put in the heads of children looking forward to school.
Posted by Jon Dykstra at 8:00 AM