What's Darwin got to do with it?

A friendly conversation about Evolution 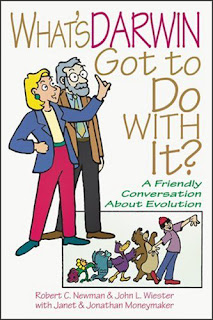 A graphic novel about evolution vs. intelligent design? Now that's got my attention!

The plot here revolves around an upcoming forum put on by Professor Teller, a Darwinist who believes evolution is a "Fact! Fact! Fact!" Of course forums involve speakers from two different sides, so Intelligent Design proponent Professor Questor steps in to offer up another perspective.

One of the first points Professor Questor makes is how important it is to define terms in this debate. Evolution is often defined simply as "change over time" and if that was all there was to it, even creationists would agree that evolution happens. (After all, we believe that all the dog species – the vast array of them – came from just a couple or so types on Noah's Ark. We certainly believe change can happen over time!) The actual debate is over the limits and direction of this change over time, so when we debate evolution, the disagreement is over whether molecules can, over millions of years, evolve into Man.

But in defining her terms, Professor Questor also makes it clear she is not a creationist. She doesn't attack creationists, but in distancing herself from them, it does leave the impression that creationism isn't quite as...legitimate as Intelligent Design. But that's a minor quibble in a wonderful book.

Other issues and topics the two professors discuss include: 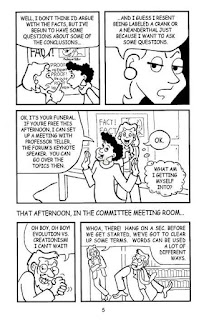 This might seem like the discussion could get quite dry and dusty, but the authors bring in all sorts of analogies and illustrations to keep things hopping. For example, Dr. Watson and Sherlock Holmes make a couple of appearances, and mutation and natural selection are personified as two superheroes (with less than effective superpowers) Mutaman and Selecta. And there's lots more!

The result is a very fun book which is also highly educational. It would be a great resource for any high school science class to go through because it touches on a lot of the big issues, and it does so with wit and impressive clarity - pictures are used here to boil down pretty complex concepts into only a few pages or a few panels. And for any comic-loving teen, this would make a wonderful present, expanding and stretching them, without overly taxing them.

You can pick up a copy at Amazon.com by clicking here or at Amazon.ca here.