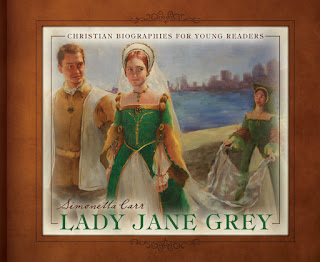 Four hundred and sixty years ago, Lady Jane Grey was made Queen of England, but she lasted in that position for less than two weeks. She never wanted the job, but was pressed into the service of her country after the Protestant King Edward died, leaving his Roman Catholic older stepsister, princess Mary, as the only other potential successor. So Jane accepted the crown. But only days afterward Mary seized power and imprisoned Jane. A little over six months later Jane was executed, but not before gaining fame for her unwavering faith and love for the Lord. Though she reigned just days, her example of faithfulness has impacted generations.

Simonetta Carr has authored a half dozen “Christian Biographies for Young Readers” so far and I’ve found each of the 4 I’ve read to be of an impressively high quality, from pictures, to production values, to prose. They are intended for kids, probably Grade 3 and up, but adults will enjoy them too. That said, Lady Jane Grey was slower paced than the others, probably because there is a lot less action in her life and short reign, so if you have the other titles this will make a great addition, but if you are only going to buy one or two start with Augustine or John Calvin instead.

You can pick it up at Amazon.com here or Amazon.ca here.