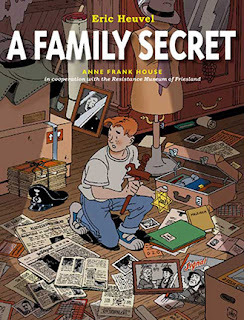 It’s Queen’s Day in the Netherlands, and the celebrations include nation-wide rummage sales. So young Jeroen heads to his grandmother’s house to see if she might have anything she’s willing to give him to sell. And like grandmothers everywhere, she is quite obliging to her young grandson, and sends him upstairs to the attic to let him see what he can find. In his searching Jeroen discovers his grandmother’s old scrapbook… and while paging through it uncovers a secret she has kept to herself for more than 60 years.

His grandmother then tells him the story of how World War II divided her family. She was best friends with a Jewish girl named Esther, and along with her mother and one brother didn’t want anything to do with the Germans. But while this brother fought in the resistance - the Dutch Underground - her father chose to work with the Nazis, and her oldest brother decided to go fight for Germany on the Russian front.

This is an amazing graphic novel, drawn in the style of Tintin, and published by the Ann Frank House and the Resistance Museum of Friesland. It’s gripping enough for adults, but for children this is an absolutely amazing way to teach them about World War II, the Dutch Resistance and the Holocaust.

I'd particularly recommend this as a book for grandparents to give their grandchildren. Every year we set aside a day to remember the sacrifice of those that fought for our freedom. Giving this book to a grandson, and talking with them afterwards about the war - about why some fought the Nazis, why some did nothing at all, and why some even joined them - is one very good way to ensure we never forget.

There is a sequel of sorts called The Search in which we learn more about Esther. It is also very good, but if you are only going to buy one, should get A Family Secret.