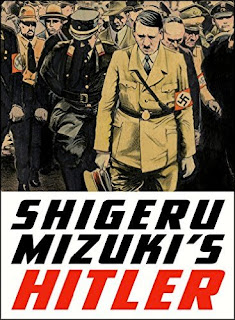 This is a fascinating graphic novel (aka comic) biography on the world's most notorious mass murder, written by a cartoonist who fought for the Japanese during World War II. Mizuki fought for the Japanese, but, as is depicted in his autobiographical graphic novel Showa 1939-1944: A History of Japan  he was an unwilling participant, not at all sympathetic to the Axis powers, or Hitler or the Nazis.

Still, the strength of this biography might be the dispassionate distance evidenced throughout that probably comes from the fact that neither he nor his country fought against Hitler. This isn't a sympathetic portrait of Hitler, but it is a "just the facts ma'am" kind of account, with the author feeling no need to demonize Hitler. Depicting Hitler's actions does that all by itself. The result is a presentation of Hitler as an egomaniac and a monster but also far more understandable then we all might find comfortable. We know people like this. "Follow me, and I will save you" he cried, and millions, fed up with the incompetence of their political leaders, turned to him as a savior.

Does that sound familiar?

This has been the rallying cry of demagogic politicians the world over, throughout history. So when we hear it today we must not be fooled. In desperation, the German people turned to someone who promised he would make Germany great again but God has warned us clearly: "Do not put your trust in princes, in human beings, who cannot save (Psalm 146:3). When we don't take that to heart – when we look to a mere man to be our savior – then we can expect evil to result.

The all too recognizable Hitler that Shigeru Mizuki shows us is one we can most certainly learn from, and take warning from.

For a book about the world's most infamous man, this has surprisingly few cautions to share.

Violence: Since Hitler is the focus, and he didn't do the killing himself, there isn't all that much violence depicted, and none of it gory. 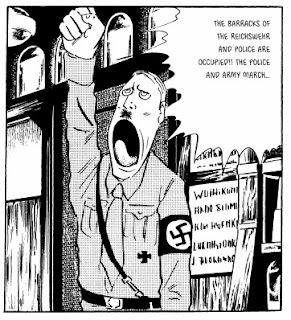 Sex/Nudity: Hitler wanted to portray himself as a chaste leader, so the relationships he had with Eva Braun, (his mistress who married him only hours before he committed suicide) and his 17-year-old niece Geli Raubal (who was rumored to have also been his mistress, until she committed suicide at 23) are detailed, but nothing more than a couple of kisses are depicted. As to nudity, there are a few panels showing skeletal naked Jews but genitalia are obscured in shadow.

Language: I only noticed once instance of anything particularly vulgar being used: someone is called an "asshole."

There is also one instance where God's name might be taken in vain. When Czechoslovakian President Hacha is pressured to sign over his country to the Nazis (or have it destroyed if he does not), right before collapsing in stress he thinks "Dear God..." While it is not noted in the book, Hacha was a Catholic so this may well be an appropriate usage, showing a man in stress turning to God. But "Dear God" is often used as a way of saying "Oh no!" and in those instances it is indeed taking God's name in vain. So I don't know quite what to think, and share this so you can make your own assessment. God's name comes up in a few other instances (ex. Hitler describes himself as being protected by God) but all other occasions are clearly appropriate uses.

Graphic novels at their best are the combination of two mediums, drawing and writing; by this combination they surpass what could be done with just art, or just literature. Shigeru Mizuki's Hitler is an example of this medium at its best. It is informative, eye-opening tale, and, while thick at 300 pages, more informative than any book that size.

It is also written in a form that might engage even someone who finds reading very difficult - graphic novels, even serious and lengthy ones, are far less intimidating to struggling readers and could be used to create confidence in them. After all, if they can read a 300 page book, that's really something!

This is a comic, but it is also a serious novel about a serious subject, and as such is suitable only for teens and adults. I would recommend it for 12 and up, and suggest it as a potential tool for English teachers who are trying to find challenging books for high school boys, especially those who don't normally like to read. This could also be put to good use by any high school history teacher as well.

You can buy a copy at Amazon.com by clicking here or Amazon.ca here.