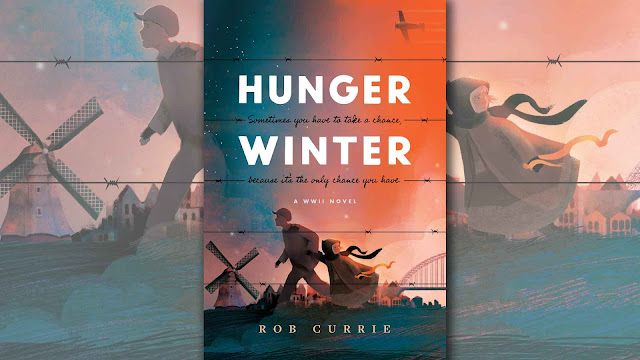 Author Rob Currie drops his readers right into the action in the opening scene, with an anxious neighbor furiously banging on the front door to tell 13-year-old Dirk Ingelse that the Nazis have his older sister. And they'll be coming for him next! It's November 11, 1944, and while the Allies have started liberating the Netherlands, the Ingelse farmstead near Oosterbeek, is still under German control. What makes it even more difficult for Dirk is that he has no one to turn to. His mother had suddenly passed away not too long before, and his father is in hiding, working for the Resistance.  That's left just him and his older sister Els to take care of their six-year-old sister Anna. Now Els has been arrested, and Dirk has to run. But where to? That's when he remembers his Tante Cora less than a half day's walking away.

The book is, in a sense, one big chase with Dirk doing his best to keep his sister safe, finding brief moments of calm, and then having to run again. Dirk shows himself to be a clever boy, and daring even despite his fears, as he finds hidings spots, and escape opportunities, and even figures out how best to fight the Nazis who are after them. As we follow along with Dirk and Anna, we also get occasional peaks into how Els is doing, facing her Gestapo interrogators.

In another way, this is all about Dirk trying to live up to the example his father set for him. He has a good dad who invested in him by spending time with him, so even though Dirk doesn't have his dad around right when he most needs him, the teen is constantly hearing his dad's advice come back to him whenever he needs to make another decision.

There are no cautions to list, but maybe I'll note one disappointment: for a book by a Christian author, and put out by a Christian publisher, I would have expected God to be more than a minor character. Even as the importance of prayer is mentioned with some regularity, God Himself is not. Maybe the author is trying to portray a journey in Dirk's relationship with God, going from nominally Christian at the beginning – he doesn't pray, except at his little sister's insistence – to something at least a little deeper at the end. But God's near-absence is odd, especially considering this is a book about people in life and death circumstances.

That said, this is an intriguing, entertaining, and fast-paced story, with the whole book taking place over just three weeks. And while there are some tense moments, it all gets tied up nice and neatly, making this a great book for ages 10 to maybe 14. The Netherlands setting will appeal to the many RP readers who have a Dutch background, and the time period – the "Hunger Winter" of 1944-45, when Allies hadn't yet liberated all the Dutch, and the Germans weren't bothering to feed them – is one that teens may not have read too much about before. So there's a lot of reasons this is a very interesting read.
Posted by Jon Dykstra at 4:57 PM