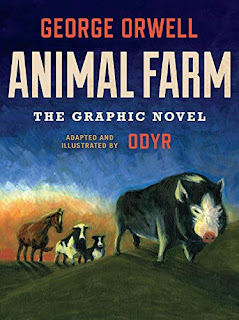 For those that don’t know the original, Orwell wrote his allegory in World War II to highlight the dangers of creeping totalitarianism. Instead of a country, his setting is that of a farm, and instead of an oppressive government, things are run by Mr. Jones, who treats Manor Farm’s “citizens” – the pigs, horses, sheep, chickens, and more – like they were animals!

One night, Old Major, a pig respected by all, tells the others of his vision of a better world in which Man is overthrown and all the animals are free to benefit from their own labor. Two legs are the enemy, and all on four legs, or with wings, are treated as equal.

The animals embrace his vision, and when the old pig dies peacefully in his sleep, three younger pigs take it upon themselves to develop and expand on Old Major’s vision. They craft “Animalism” and appoint themselves as leaders of the movement. When the animals rebel against Farmer Jones, they successively drive him off and take over the farm.

The story that follows has clear parallels to that of the 1917 Russian Revolution, that began with noble-sounding aims – freedom from oppression, equality of all – but which quickly evolved into simply another form of totalitarianism. The animals find that, though they are free of the farmer, they aren’t free of having to follow orders. The pigs have them working harder than before, and they are fed no better. Their swine leaders are soon living in the farmer’s house and eating well. But they deserve it, right? After all, they need to be properly provided for, so they can provide direction! It soon becomes evident that while “all animals are equal…some animals are more equal than others.”

Because this is a graphic novel, there are a few pages of violent content depicted. But Odyr’s is a thick-line, smudged-pastel style, leaving the gory details mostly a blur. So while these pictures might be a bit much for a child, they are nothing that would disturb a teen.

The only other caution I’ll offer concerns the lesson being learned. Orwell was no Christian, so even as he makes a case against the godless tyranny of totalitarian rulers the world over, he isn’t able to offer a better alternative…so it is fortunate he doesn’t even propose one. However, that means Christian readers will have to do that work for themselves. We can agree with Orwell about the problem: that man has a bent for tyranny and that larger the government the more they can insert themselves into our lives (1 Samuel 8:10-22). But we also know there is a proper, though limited, role for government, specifically to punish evil (Romans 13:1-7).

This is a brilliant adaptation of Orwell’s classic work, with a mix of colorful and also stark images that will grab any reader’s attention. Odyr has made Animal Farm accessible to age groups and casual readers that might otherwise never read it.

While I highly recommend this as a gift for teens, it would be a waste to hand it off to your son or daughter and then leave it at that. Unless an adult helps them understand that message behind the story, they aren’t likely to see the real-world application, and will completely miss Orwell’s warning about the dangers of big governments of all sorts. 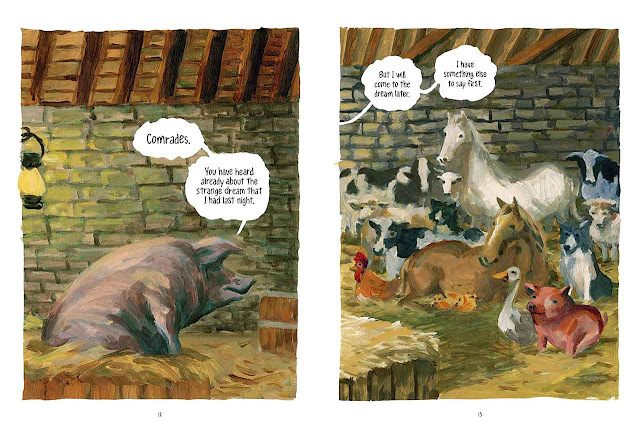