The life of Frederick Douglass 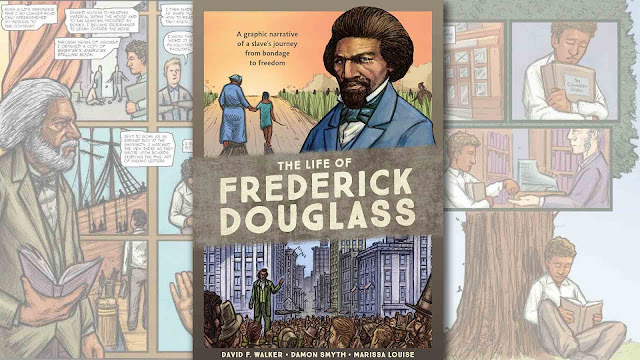 A graphic narrative of a slave's journey from bondage to freedom
by David F. Walker
Illustrated by Damon Smyth
2018 / 173 pages

Frederick Douglass lived his first 20 years as a slave, then spent the next 25 speaking against the evils of slavery. After the American Civil War and the emancipation of American slaves, he spent his last 30 years fighting the bigotry that still lingered. And in his final decade, defying all social expectations of the time, he married a white woman, Helen Pitts.

While a graphic novel biography can't do this complicated figure full justice – the man himself wrote three separate autobiographies in the attempt – the size of this one, and the evident research backing it make for a very good introduction to its subject. As we follow his life, from plantation to town, to escape to the North, we get to meet along with him key figure in the American battle to end slavery. He knew Harriet Tubman, the lady who repeatedly ventured to the South to bring slaves to freedom in the North. John Brown hid at his house after the white abolitionist's unsuccessful attempt to start the Civil War some six years before it eventually began. Douglass was both an opponent and then an ally to Lincoln, due to largely Lincoln's vacillating opposition to slavery. Later he became a friend and then an enemy of women's rights advocate Susan B. Anthony, the change of relationship due this time to a compromise by Douglass when he decided to support black's voting rights even when they no longer came as a package deal with women's voting rights.

This is quite the story, and it is well told.

Its important readers understand that some of what's depicted is deduction, and not clearly established fact. But a read of the introduction will help readers tell what's what.

A word of warning is due for at least a couple uses of the "n-word" in the book, though with the topic matter, that is as you might expect.

There is also some partial nudity. None of it sexual, and it could even be described as modestly done: one scene is a black woman being whipped, naked from the waist up, but her front is either away from view, or hid in the shadows. There are also three completely naked slaves shown, but all are hunched over, in a seated, almost fetal position with arms wrapped around their knees so no genitals are shown, though the top of one's buttocks is.

The overarching concern would be the brutality. There is no gratuitous violence - but there is violence.

Finally, while we get to hear Douglass debate with himself about how slavery should be fought, and whether violence was warranted or not, and whether it was right to compromise on the women's vote, we aren't offered any other perspective. So readers will have to apply their own biblical lens to this for themselves.

Altogether that would make this a book for older teens maybe 14 and up.

The target audience for this book, teens, aren't always fans of history books, perhaps because they've been exposed to too many of the wrong sort, texts that make it all about dates and names. What a joy it is, then, to discover a page-turning biography like this. The Frederick Douglass we meet here, while not exhaustively explored, is fleshed out, and consequently memorable. We've now met him, and won't forget him.
Posted by Jon Dykstra at 4:55 PM