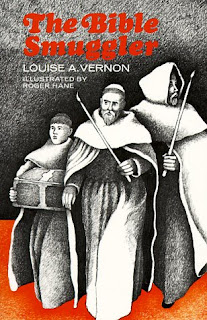 This is more historical fiction than biography, but most importantly it’s just so good. The Bible Smuggler is the story of William Tyndale and his life’s mission to translate and distribute God’s Word in English. We see events unfold through the eyes of Collin Hartley, a fictional but very observant young servant to Tyndale.

While Hartley isn’t real, all the central characters are, and seemingly quite accurately portrayed. Of course this isn’t a scholarly work, and it shouldn’t be relied on for the precise details. But if it is taken for what it is – an introduction to Tyndale intended for children 10 and up – then there is a lot to appreciate here. This is just a fantastically well-written book and like all great children’s books, adults will enjoy it too.

A word of caution on her other titles

I was excited to learn that the author had written quite a number of other children's novels about other key figures in church history, but after having a chance to review a couple, I know I won't be recommending them all. Mrs. Vernon seems to be equally sympathetic to all of the key figures she writes about, which is odd since her subjects span the whole cross-section of Protestantism – Arminian, Anabaptist, Lutheran, and Calvinist too. One example: The Man Who Laid the Egg is a positive portrayal of Erasmus, a man who, while praised by Luther for his great learning, was also chastised by Luther for lacking the courage to leave the Roman Catholic Church.

This is an author who won't pick a side - she admires the bravery and courage of all these men, but glosses over their very significant theological differences.

Ink on his fingers about Johann Gutenberg's efforts to print the first Bible (before then all the copying was done by hand) also shows some of this indiscriminate tendency. At one point in the story a Roman Catholic monk gives his perspective on penance, without any critical comment from other characters. Vernon portrays his approach as a valid one – she makes it seem, to the uncritical young reader, than when we sin, starving ourselves and depriving ourselves of human company are a good response. Vernon's books all seem to be about the Reformation, so when it comes to sides, it is clear she's a Protestant-sympathiser. Why then wouldn't she clarify here that Jesus takes our sin away, so when we repent and are forgiven the appropriate response is not to try and punish ourselves, but instead to turn from sin, and in thankfulness, start doing good?

However, this is only a brief passage in a very interesting book about a pivotal figure in the Reformation. So if your son or daughter loved The Bible Smuggler, then Ink, accompanied by a word of warning, may be a good follow-up.

I will continue to keep an eye out for other really good Louise Vernon titles, and let you know what else I might find. But I don't misunderstand this recommendation to be one of all that she writes.

Support this site by purchasing The Bible Smuggler at Amazon.com through this link. It won't cost you anything, but sends a dime or two our way.