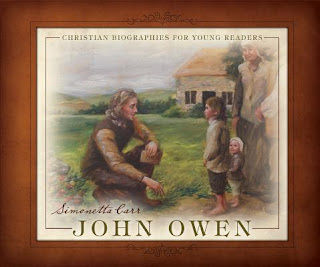 Simonetta Carr has created one of the best children's resources about Calvin and has now done the same for John Owen. But there is a difference between the two. While her book on Calvin is the best of a considerable bunch, her book on Owen is the best by default – I don't know if there are any other contenders.

Why this dearth of attention for Owen? He wasn't (quite) the pivotal figure Calvin was, which may explain it in part. But I think there is another reason. While Calvin had a hard life, Owen's life might best be described as complicated, and to a degree that doesn't lend itself to the type of simplified summaries children's biographies need.

Politically he was involved in three English Civil Wars in which the country went from a monarchy to a republic and back to monarchy again. He was also involved in theological battles to allow for the pure preaching of God's Word – he was a "Noncomformist"who spoke out against the arminianism and intolerance of the Anglican Church. While his fame kept him from prison, the threat of it was always hanging over him. We know little of his personal daily life, but here too he had burdens to bear: John Owen has 11 children, and buried them all. And then there are his writings: Owen is renown as one of the most influential, and theologically dense, English Puritan authors.

To capture this man in a way that children will be able to understand is quite a challenge. And, to be blunt, I don't think Carr quite manages it. Her summary is too much timeline - what he did when - and too little story. We don't get a feel for the man. That said, this is likely the best children's biography that could be written for the man.

Now that I've damned this book with faint praise, I want to highlight why this is indeed a really good read.

First off it is a  good overview, and easy to follow. Children unfamiliar with the time and place will have no difficulty understanding what is going on. That is no small feat!

Second, Carr has, again, peppered the book with pictures – 37 over its 62 pages – with more than a dozen of them full-page paintings by Matt Abraxas, commissioned just for the book. That gives it a welcoming, inviting feel.

Third, it fills a gap. Church history is a subject that most Christian schools teach, but I don't think many students keep studying it as adults. So even though there are adult biographies on Owen, there was a pressing need for a children's version – we really should have an understanding of what God wrought through this man. Thankfully we now have this very readable introduction.

So I recommend this as a wonderful school resource - all our libraries should have a copy. With a teacher's encouragement children will find this an easy book to read, and a good introduction to a man they knew nothing about before.

You can pick it up at Amazon.com here, and Amazon.ca here.