Luther: Echoes of the Hammer 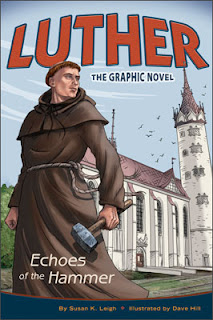 I tested this graphic novel (a.k.a. comic) on two of my nephews with mixed results. The older, heading to grade 10, was happy to take a look, and thought it would be a great way to learn about Luther. The other, two years younger, seemed to think it was too much biography, and not enough comic book for his tastes.

As far as comics go, this one is quite intense. Interspersed throughout are explanations of key events, like the Diet of Worms, key terms, like “indulgences,” and key figures, like Charles of Spain, the Holy Roman Emperor. These one or two-page insertions really add to the narrative and make this a highly educational comic.

However, a few of these insertions will also trouble informed Reformed readers. In one list of Luther’s adversaries, Calvin is numbered among them. While it is true Calvin and Luther had their differences, it is surprising to see Calvin listed among Luther’s enemies. Especially when, some pages later, we find Erasmus listed as one of Luther’s supporters!

While Erasmus was, like Luther, critical of the Roman Church, he never left it, and this led to strong, vitriolic disagreements with Luther. In fact Luther once called Erasmus, “the very mouth and organ of Satan.”  It is downright silly then for the authors to list Erasmus as a friend if they are going to list fellow Reformer John Calvin as an adversary.

The only other quibble would be the too high regard the authors have for Philip Melanchthon, describing him as “a great Reformer, second only to Martin Luther.” The publisher is Lutheran so this overestimation of the second most important Lutheran is understandable, but of course Calvin is clearly the more important Reformer. That said, these are just quibbles, amounting to only a few paragraphs in this vast and weighty graphic novel (I would estimate it as well over 20,000 words long).

The writing is crisp, succinct and engaging. The artwork is attractive and instructive – many of these pictures are worth a thousand words. For example, in the pages covering Luther’s visit to Worms illustrator Dave Hill shows us the man’s quiet passion, his many supporters, and his opponents marshaled together. This gives us a good understanding of the setting, and thus a better understanding of the courage it took for Luther to stand up for what he knew to be true.

So, it is an impressive work, aimed at older teens, and certainly enjoyable for adults too.

For a 32 page preview, you can click here. And you can pick up a copy at Amazon.com by clicking here.