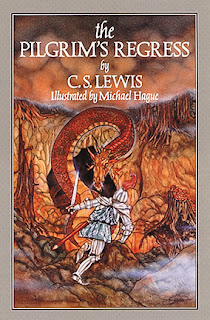 One last C. S. Lewis to recommend... Next month I'll tell you about a book by the author this book is responding to.

Pilgrim's Regress is, as sharp-eyed or well-read readers might already have figured out, a twentieth-century update of Pilgrim's Progress, by John Bunyan; however, while Bunyan's book can be seen mainly as a journey of the soul, Lewis's is much a journey of the mind. The allegorical tale tells how John, raised within a nominally Christian but very moralistic environment, is driven by sweet longing for an island he sees in a vision to seek he knows not what.

Sadly, along the way, John tries many other things to satisfy his sweet longing. Right at the beginning, he mistakes Lust for that sweet longing. Recently a commentator noted how today's obsession with pornography involves, as C. S. Lewis and G. K. Chesterton would have understood, that same desire for something beyond ourselves. Some of the details at this point (e.g. "a laughing brown girl about his own age, ...[with] no clothes on" standing in for John's lustful desires and activities) definitely point to this book being for a mature audience - definitely not for children.

John tries to understand and satisfy his sweet desire in many different ways and many different places. He meets characters representing both sides of the secularization of Western culture - Romanticism and the Enlightenment. In Book Two, "Thrill," John encounters Mr. Halfways, who promises that the Island John seeks is everywhere and nowhere, that it can be found in idols like the  search for beauty (and thus supposedly finding truth), in romance, in the love of power... The other characters have names that similarly signal both their methods and their inadequacy, like Media Halfways.

The characters John encounters from the Enlightenment show Lewis's battle as a new Christian against those who fancy that they are tearing down idols, but are actually worshipping at the altar of reductionism - the idea that all spiritual longings are merely biological, psychological, or economic motives in disguise. He meets characters like Neo-Angular, Humanist, and Sigmund (representing, of course, Freud). He is assisted by true Reason when she slays the Giant of  "Darkest Zeitgeistheim," but even Reason cannot bring him to the object of his sweet longing. For that he seeks the help of Vertue, but even Vertue fails him in the end.

Only Mother Kirk can guide him to the truth, to the glimpse of his sweet longing on the other side of the seemingly suicidal trip across the Grand Canyon, a trip that equips him to tackle the Dragons of the swampy southern marshes (Romanticism) and of the harsh Northern wastes (Enlightenment modernism).

Lewis's most allegorical work shows the search for truth, the battle of faith and reason against the intellectual idols of his time (and ours) as one that is not merely intellectual, but spiritual, personal, and life-and-death, as it truly is - but also life-giving, as it truly is, to those who find, not only truth, but the Truth, the Way, and the Life.

You can pick up a copy of Pilgrim's Regress at Amazon.com by clicking here.