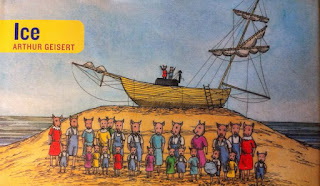 I've recently become a big fan of wordless books and Arthur Geisert's Ice is one of the funnest. It is the story of a clan of pigs, living together on an island enduring a hot, hot summer. The island's water reservoir is just about empty, so the pigs band together to get their airship ready. Then they sail off, traveling 'round the world to the north pole where they snag and drag an iceberg back to their home. We then see the lot of them with ice saws and pick axes carving up the iceberg and depositing it in their reservoir. Ice for everyone!

What makes books like this so much fun is that my two-year-old can read them to me. When we first got this one home I read it to her the first time, lingering over each page-spread, and noting all of the many things that the pigs were up to. Then, the next night, I told her I would read her one story, and she would read me one. She was very excited to do so, and because we had gone through it together once before, she was up to the task. It was a joy to see her working through how best to describe the action - this is a very fun way of encouraging your child's creativity and imagination.

The author has written a number of books about this pig clan, including one or two others that are wordless. These titles are all more involved - there is quite a lot going on in each picture - making them too complicated for my two-year-old, but perhaps quite fun for children two or three years older.

Ice, though, is amazing for two-year-olds and 40-year-olds, and has my vote as the very best of Geisert's bunch.